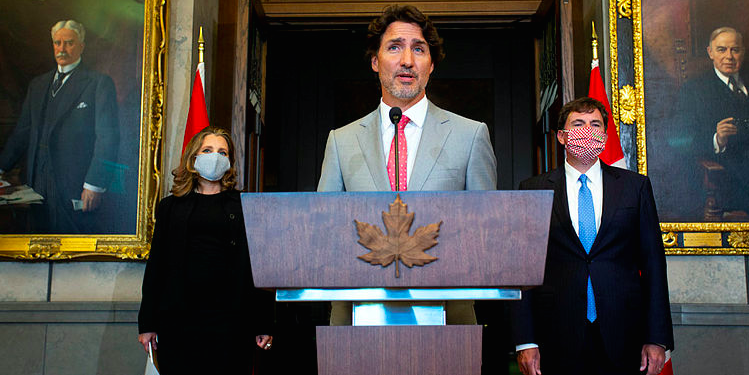 A polarized nation Canada has become. We are today a society which encapsulates a well-worn aphorism: “United We Stand, Divided We Fall.”

Within this dynamic, our country remains unique. We are in 2021 a self-hating society. According to our government, our history is awful. By way of our academic world, contemporary Canada is racist, bigoted and xenophobic.

As advanced by an uber-powerful multicultural lobby, our nation should be stripped of all elements of colonial heritage. Time and again media refuse to point toward a salient truth: there is just one identifiable community sanctioned to be on the receiving end of race-oriented hatred–  our caucasian communities.

The degree of ubiquity is astounding. This post-modern ethos has permeated all aspects of society. Its long term effect can only be imagined– because no one will speak or write about them.

The advocates of animosity are a powerful social force. Leading the way is Prime Minister Justin Trudeau. Though these sentiments have existed since father Pierre Trudeau forced multiculturalism upon Canada, no single figure has promoted the vilification of English Canada as Justin Trudeau has done. In tandem, Christian Canadians are also being shipped to the periphery of society.

In a case of never-ending irony, the liberal left refer to this as “social equality.” Cultural Action Party take a different tact. We view the situation as what might be referred to as “Woke War 3.”

What stands out among the battle–which CAP consider a decades-long, pre-mediated agenda– lies in a certain duality:

To optimize success, it is not enough for the “woke generation” to hate English Canada. What sets up the agenda for ultimate success is for the targeted peoples to hate themselves.

Such is the fairy dust that Justin Trudeau has been sprinkling on society since the day he was crowned king of Canada. It is a form of self-loathing systemically entrenched within society, and it has the power to transform our nation for all-time.

READ MORE: How Justin Trudeau Stripped Away The Dignity Of Anglophone Canadians

Let patriots have no illusions here. This is not an abstraction. The program is a giant, runaway success. If not for media obfuscation, the extent to which national self-abasement has permeated Canada would be obvious to all.

It is indeed pay-back time for Anglophone Canadians. The Woke Ones are gunning for their pound-of-flesh, and it appears nothing can come along to stop it.

Trudeau leads the pack. NDP leader Jagmeet Singh plays back-up quarterback. Other than the Conservative Party(perhaps them as well), the Liberals– together with opposition parties– have formed a covert coalition government.

For CAP’s money, Canada stands on the verge of national transition. The fall out will affect every condition of our nationhood from 1867 until Justin Trudeau became prime minister in 2015.

This includes what Cultural Action Party has branded “Second Nations” status for Old Stock Canadians. What to do? The answer lies in political organization. In truth, two can play at identity politics–our Charter of Rights and Freedoms supports such a development.

Not that the Woke Wonders do not have a remedy. Their weapon is found in branding all forms of Anglophone solidarity as racism. Whether or not this can be maintained as we work our way deep into the 21st century is another matter.

Fifty years of pre-planning covers off a great deal in prevention of push-back. As far as CAP is concerned, if true conservatives do not organize themselves politically, we are headed for second class social status.

However it manifests– conservative solidarity, Western Canadian, Christian, or some other form– it needs to occur, and fast.

Without it, government, media and academia are certain to steamroll right over our communities under the ostensible goal of establishing “equality” for all Canadians.