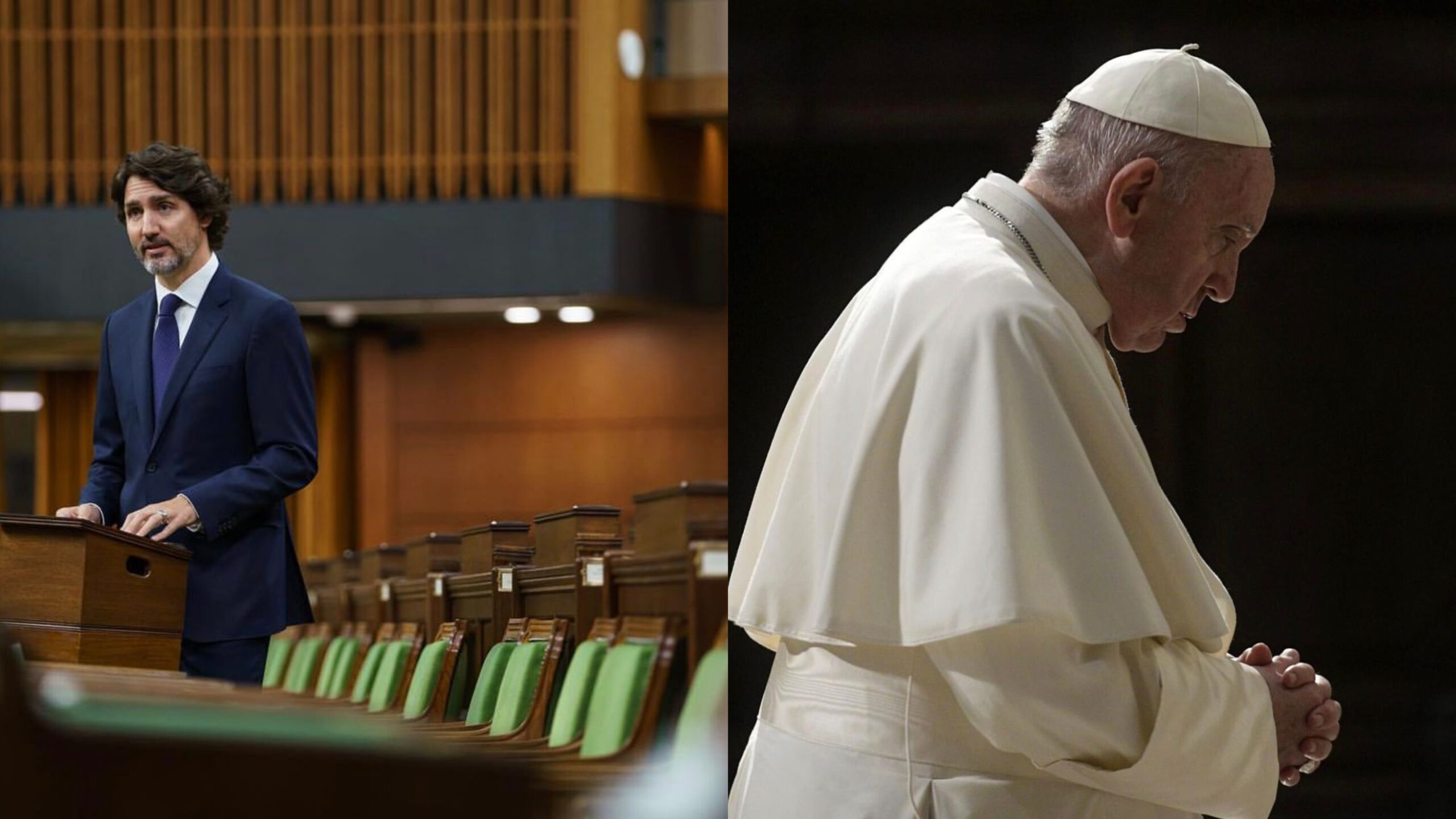 To be forthright, Cultural Action Party of Canada called it from day one. Rather than sunny ways, freshly-minted Prime Minister Justin Trudeau would over time bring serious trouble to society. He has done so in myriad ways– worst of all being an unprecedented form of social division.

An outcome of community disharmony is perhaps best exemplified by Justin Trudeau’s agenda of attack upon Christian Canada, in combination with an advancement of 3rd World religious communities.

Society may have now reached a pinnacle in the program. The recent discovery of mass graves filled with residential school children from Indigenous communities has become a catalyst for the burning of dozens of Canadian churches. In response, statues of Sir John A. MacDonald, Queen Elizabeth and Queen Victoria were torn down over the Canada Day weekend.

Not that there was much of a Canada Day for 2021. PM Trudeau ordered our flag to be held at half-mast. Dozens of municipalities cancelled all forms of celebration. Indeed, Canada as a whole has fallen into a quagmire of self-loathing never before experienced.

Well, perhaps “fallen into” is not the correct term. In reality, it is more like “railroaded toward.” Of any political figure, Justin Trudeau is the number one perpetrator. If anyone feels this to be inadvertent on his part, CAP caution them to think again.

What has been established is a war upon traditional Canada. All elements of our colonial heritage, as well as connections to the British Commonwealth, are now under attack. Our country is today on the cusp of a post-modern reformation. Justin Trudeau knew this would occur. Everyday he has been prime minister is a day dedicated to the re-imagining of our country. No surprise, as Mr. Trudeau is neither an Anglophone, nor a believer in democracy.

What will ultimately transpire is the real issue at hand. No Canadian should be under the illusion that our ruling government, media, our legal “experts” or anyone else is going to inform our citizenship what this pending fate portends.

Certain clues do exist, however. The reason they remain clues is found in a lack of presentation from establishment media. Notice how neither CBC News, nor any other media entity ever speculate on the destiny of our country?

Pray-tell, where are our country’s futurists? Some may recall this archaic phenomenon. Once upon a time, there existed media personalities who wrote of Canada’s future–or at least meditated upon it. The entire dynamic has been wiped clean– for good reason: government does not want the public to have the slightest inkling as to the fate of society.

Why not? Because we will not want what is coming. Certainly not “Old Stock” Canadians. As in, those who recognize a Canada previous to the Orwellian installation that occurred the moment  Trudeau became quasi-dictator. CAP will therefore speculate on the matter:

Christianity is a dying entity. Not that Christians won’t exist. Rather, the Church is now branded with a permanent black mark. In its stead comes Sikhism and Islam— Justin Trudeau’s religions of preference. Via the pandemic parade and residential school discoveries, Christianity now exists as a national pariah. This will find a place of permanence as the Woke Revolution— Trudeau’s version of China’s Quiet Revolution— continues indefinitely.

Also hot to trot is what one may call a “Great Reset Community Inversion” program. Here, Canadians of Anglophone heritage find themselves being shipped off to second class community status. PM Trudeau loves this. For him, it’s punitive payback time. One can only imagine Justin Trudeau’s glee as he successfully plays Pharaoh to Canada’s Anglophone slaves wandering in the desert of diversity exclusion.

Democracy itself is an obvious target. Trudeau and team do not champion democratic process. Rather, they enjoy dancing around this form of governance. As in chipping away at it through draconian measures, undermining its essence, and giving the Charter the old heave-ho when it does not suit their purposes.

In more pragmatic terms, the Trudeau transformation wouldn’t be complete without a word on a fundamental of democracy–the election process.

For the first time in Canadian history, the next federal election will be over the moment they drop the writ. Winner: Justin Trudeau. Not a single vote is necessary for this outcome. Mr. Trudeau is going to win. He is ordained to win. He will win because the United Nations say so. The victory is in the bag because China wants it this way. If his victory does not occur legitimately, it will occur illegitimately.

Such is the futility of elections–as well as democracy in general– within post-modern Canada. Our fate is sealed. Society is to be turned upside down by way of the Woke Revolution.

As for Old Stock Canadians— Anglophones, Francophones, Christians, Conservatives— the time to accept this is right now. Media are in place to obfuscate Canada’s fate for the purpose of push-back against opposition to the Great Reset revolution.

In other words–in typical globalist fashion–by the time Old Stock Canadians realize their true destiny, it will be well past the point anything can be done to reverse the process.