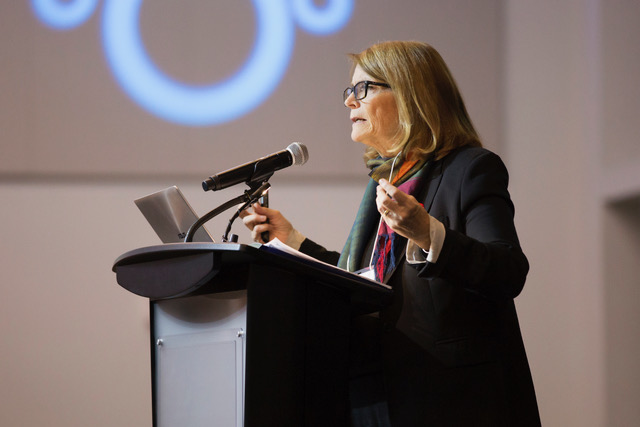 CAP has to wonder if concerned Canadians have noticed a social trend currently eluding the majority of our citizenship. The greater the degree of race-based data gathered up via “anti-racism” advocates, the greater the push to remove Anglophone citizens from their jobs.

An irony being found in those who advocate for replacing “Old Stock” citizens with “racialized” Canadians  on a vocational level:

“The numbers are so stark,” said Annie Kidder[pictured above], the group’s executive director. “It definitely points to a problem in the system when you are thinking of all the results where race comes into play and how important it is that we work harder to have a system where the staff, all the staff, are reflective of the students.”

“Stark” suggesting gloom and despondency over the fact that the majority of Canadian public school principles are white.

Annie Kidder is herself white, yet espouses what should be understood as an anti-white narrative. In this, we discover what remains unique within Canadian society. It is caucasians, and caucasians only, who work to damage the communities from which they personally derive.

Muslims in Canada don’t do this. Nor Sikhs, Chinese or any other identifiable community within our pluralist society. It is only those from Anglo-Christian backgrounds who dedicate themselves to masochistic self-degradation.

The agenda remains devoid of historical context. It should be no surprise that a nation originally settled by white Europeans would find that the majority of quality employment opportunities have been filled with Anglophones and Francophones.

It is a natural, organic outgrowth of the historical development of Canadian demography. For  woke witch hunters like Kidder, it’s one step beyond criminal.

“The report notes that the homogenous racial profile of school principals is in contrast to Ontario’s population, which comprises more than half of Canada’s ‘visible minority’ population.”

The report doesn’t note that it take time for such a transition to take place. More and more, racialized Canadians are finding themselves in quality leadership positions throughout our country. The Toronto District School Board exists as a tangible example. Dozens of TDSB trustees come from Sikh, Chinese and Muslim heritage. Go and check for yourselves.

Of course, it’s not good enough for Ms. Annie Kidder. For the woke self-haters, nothing ever is. They are, and will continue to be, insatiable in their attempt to transition Anglophones to the back of Canada’s social bus.

Astute Canadians would be wise to come-to-terms with an ominous social trend. It is found in the area of weapon of the woke: the ethnic employment quota must match that of the general demography.

Therefore, if 30% of a geographic area is “racialized,” then 30% of school board employees must follow suit. Due to government and media obfuscation, the general public fail to see where this is leading.

At present, Canadian is being flooded with immigrants from China, India, Pakistan, Iran, Syria and elsewhere. Did you know? Currently, 51 federal ridings out of 338 are today minority white. Of course, you wouldn’t know it, because CBC, CTV, Globe & Mail and the rest refuse to tell it.

READ MORE: 51 Out Of 338 Federal Ridings in Canada Are Now Minority White

Upon which we move to a taboo topic: the future of our nation. Considering demography on an historical continuum, whites will transition to a minority community within 40 years.

Urban Toronto already has multiple ridings that are minority white. Let us speculate that in the year 2040, the GTA school district will be 80% racialized, and 20% caucasian.

By way of Annie Kidder and People For Education, a limit of 20% of new hires shall be imposed on Anglophones.

Diversity Is Our Strength?

Joy to the world? Not really. In fact, not at all. Due to immigration and multicultural policy– both devoid of public buy-in and therefore non-democratic in nature– Anglo-Canadians have been transferred to a minority, disempowered, and held back from meaningful employment.

Not only does all this go over the heads of mainstream Canadian society. Media breathe not a word about the degeneration of Anglo-Christian Canada at the hands of gullible, foolish Canadians like Annie Kidder.

Ontario “needs, and is somewhat working towards, a more representative staff,” Kidder added. “We have a long way to go.”

We certainly do, Ms. Thang. All the way to the point where your own people transition to a powerless– and potentially persecuted— identifiable community.

Even worse, there are thousands upon thousands of these naive, short-sighted white woke people dispersed throughout our nation.

Of course they are, Annie. Ever heard of a woke snowflake who shows a shred of appreciation for the progress made in damaging our communities to no end?

Insatiability rules the day as Anglophone Canada continues to be walked down the plank to its inevitable position in a scrap heap of Canadian society.