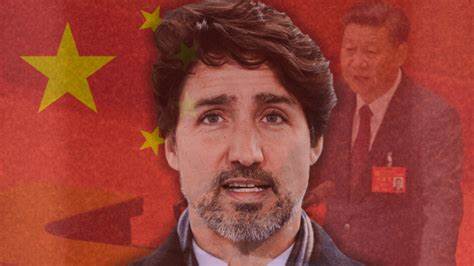 “An organism that lives on or in an organism of another species, known as the host, from the body of which it obtains nutriment.”

Generally viewed within a context of science or anatomy, the definition serves as a metaphor for the state of Canadian politics in 2022.

The Liberal government of Canada are an organism within another species. PM Justin Trudeau’s authoritarian governance lives within a democratic society. While most Canadians believe in democracy, Trudeau is a communist.

In this fashion, our PM is chewing away at democracy within our body politic. The host is Canada, from which government obtain nutrients necessary for the fall of democratic governance.

“Parasitism is a close relationship between species, where one organism, the parasite, lives on or inside another organism, the host, causing it harm, and is adapted structurally to this way of life.”

Throughout the seven-year period Mr. Trudeau has maintained his grip on society, Canada has been “adapted” to the PM’s way of life. Communist, Globalist, “Woke,” Great Reset. Call it what you like; the pattern remains.

The old way is democracy; the post-modern way, pseudo-communism. We speak of a railroading of Canadian society by Trudeau and his backers. World Economic Forum. World Health Organization. United Nations. China. Iran. These are the entities which have propped-up Justin Trudeau for a specific task: the conversion of Canada from democracy to dictatorship.

Accomplishing the task takes rigor, as well as constant dedication. As the Liberals learned from China, the first step is control of media. PM Trudeau accomplished this by funding over 1000 major and small-market media organizations in Canada. With a fundamental of socialism in place, Trudeau’s Liberals set the foundation for national seduction of 38 million Canadians.

“Cancer is a disease in which some of the body’s cells grow uncontrollably and spread to other parts of the body.”

In the year 1968, Pierre Trudeau became prime minister. One of his major innovations was the importation of China and its government to our nation. In 2022, astute observes come to understand how the communist seduction of our nation occurred.

Beginning with our universities, anti-Canadian sentiment began to fester in our study halls. Anti-Colonialism— a favourite of Pierre Trudeau– became the standard within educational institutions. Over the decades, CBC and mainstream media transitioned to neo-communism.

By the time China’s dissemination of Covid came along, our health industry had joined the conversion party. Canada’s fundamental institutions has been “converted” to neo-communism, while the public–generally unaware of the transition– remained in the dark.

Why has the seduction been so darn successful? Here, we turn to an original source of authoritarian warfare: “The Art of War” by ancient Chinese philosopher, Sun Tzu:

“The greatest victory is that which requires no battle.”

We discover the key to Trudeau’s success. The schemers who program his political brain have seduced our nation. In this form of battle, silence is golden.

Enter, stage leftist, Canadian media. Of course, this is subtle stuff.  If Liberal-funded Globe & Mail and Toronto Star output is perpetually pro-Trudeau, they will not be trusted by the public(they aren’t regardless).

Therefore, media must oscillate back and forth between light condemnation and pro-Liberal sentiment. A great example is the current Emergencies Act inquiry. In the beginning, CBC present a watered-down version of success for Trucker’s Convoy organizers.

Move to the final week, and its Liberal Cabinet time. Trudeau, Freeland, Blair, Alghabra. By the time the game has ended, the invocation has been justified. Justin Trudeau returns to office as Canada’s neo-dictator.

How far is this Trudeau character willing to go to preserve the “woke way of life” in Canada? The answer is simple: all the way. Just as dictators of history have done. Some have succeeded, while most met a nasty fate:

Hard to say what the ultimate fate will be for Canada’s novel dictator, Justin Trudeau.

By any measure, our aberration of a national leader has profoundly damaged our democracy. How far will our neo-dictator take this? Can democracy in Canada fall in the process?

CAP have to admit– it isn’t looking good. Justin Trudeau’s politics are set-in-stone. A woke automaton, nothing shakes the foundation of this man’s ideological orientation.

Justin Trudeau shall forever be what he is: narcissistic as the day is long, his megalomania is capable of almost anything. Including the downfall of Canadian democracy, as our country transitions to North America’s first authoritarian state.

9 thoughts on “Will Trudeau Destroy Democracy In Canada To Remain In Power?”