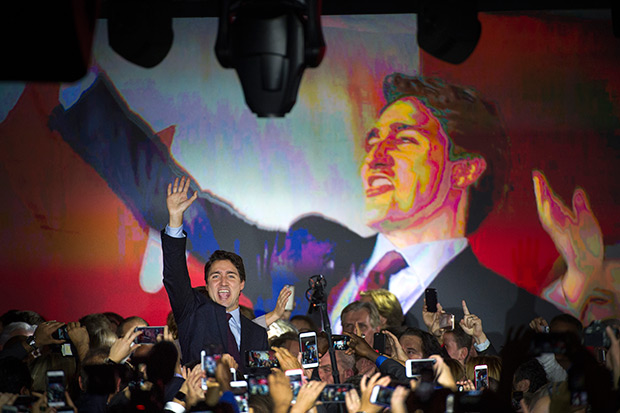 “Prime Minister Justin Trudeau will visit Saskatoon today where he will meet with long-term care residents, vaccine researchers and visit a daycare.”

A wise Liberal Party marketing move it is. Unlike everywhere else in Canada PM Justin Trudeau visits, the odds are low that expletives will be hurled at our prime minister. That is, unless a chapter of “Hell’s Grannies” from Monty Python appear on the scene. Chances are low that the daycare set are likely to throw their soothers at the PM. Of course, this example of “racism” would not be tolerated.

Thus, a replication of Mr. Trudeau’s reception this week at a First Nations event is unlikely. Despite mainstream media’s best efforts, an observation has crystalized among political observers: three-time winner Justin Trudeau cannot appear in public without being hassled by attendees and/or protestors.

Prime Minister Justin Trudeau cancelled his event in Surrey on Tuesday night after protesters showed up and started harassing some of the attendees.”

The reason? You guessed it– racism. According to Global News, protestors shouted out several racial slurs toward the mostly South Asian attendees. Nothing to do with appearance of our PM, of course. One has to wonder why Justin Trudeau would approve the importation of millions of 3rd World migrants, and then be shocked-to-the-gills that racism exists in our country.

Earlier this week, Trudeau was called “a criminal” by Indigenous protesters in Kamloops, B.C. That is, according to truth-telling True North News. Legacy media did their duty by spinning away from attendee condemnation, preferring to publish headlines such as:

“Trudeau faces chants, pounding drums as he walks through crowd at Kamloops memorial.”

Many Canadians are aware of the infamous Trudeau “rock throwing” incident. While campaigning for a third term in office, a protestor tossed a small amount of gravel in the direction of our national leader. Several days later, police announced they had charged Shane Marshall, 25, with one count of assault with a weapon.

CAP draw a general conclusion: Justin Trudeau, 23rd prime minister of Canada, is hated everywhere he goes. Not only in Canada, but on an international basis, as exemplified in his appearance at a European Parliament conference in March, 2022.

“When Prime Minister Justin Trudeau recently addressed the European Union Parliament and warned of growing threats to democracy, he received an angry backlash from some elected members who accused him of responding to the recent anti-vaccine mandate convoy protest like a dictator.”

Liberal Party employees CBC News wrote it off as a sentiment expressed by right-wing politicians. In truth, they are just covering for Mr. Trudeau– as they are paid to do.

Putting the situation in its rightful place, astute Canadians come to recognize the reason why our PM is continuously treated with vitriol. Media may have obfuscated reality for a period of time, but eventually the truth comes to light.

Justin Trudeau is fake as a three-dollar toonie. This being the bottom-line reason why Canadians have turned their backs on the man. His early-stage virtual signaling turned out to be hollow. As did his concern for average Canadians. Liberal government policy has over time been proven to be motivated by external political forces.

To confirm, read through policies published by the World Economic Forum. Here, readers will discover an inordinate amount of synergy between the Trudeau government, and WEF mandates. Turning to healthcare, peruse through World Health Organization policy regarding Covid and climate change. In doing so, you will experience a replica of the WEF phenomenon.

Covid, climate change, abortion, euthanasia, LGBT, transgender: all entrenched into society by Justin Trudeau; all representative of the will of the United Nations, WHO and WEF. Degree of exposure from establishment media: begin and zero, and don’t stop till you get enough.

The more time that passes, the greater the degree to which Canadians have come to understand these political dynamics. The very reason why Justin Trudeau is a PM with a limited shelf-life. If he was cut off after two victories, he might have successfully fooled the Canadian people.

It didn’t happen– thus the prime minister is exposed as fraudulent. Bringing about a topical question: what happens if Trudeau runs for PM again, and wins? Surely this will seal the deal. A prime minister hated from coast-to-coast, Windsor to Whitehorse, wins a fourth term in office.

Because of this, it is likely Trudeau will be gone. Possibly. Not that this will effect a federal election outcome. Despite all hype about Pierre Poileivre, this man will never be prime minister. Heck, it is unlikely he will even become party leader.

Pourquoi? Because he is not the Liberal Party’s choice– Jean Charest is. By extension,  Charest is also the choice for WEF and WHO. Notice how media go easy on Mr. Charest while ripping Pierre Poileivre to shreds? A tell-tale sign it is. Regardless of outcome, a continuation Canada’s false democracy is a safe bet.

Underneath the entire political dynamic lies a condition of pseudo-communism. For the moment, Justin Trudeau remains Canadian dictator. Whether another woke global people-kind will take his place remains to be seen.