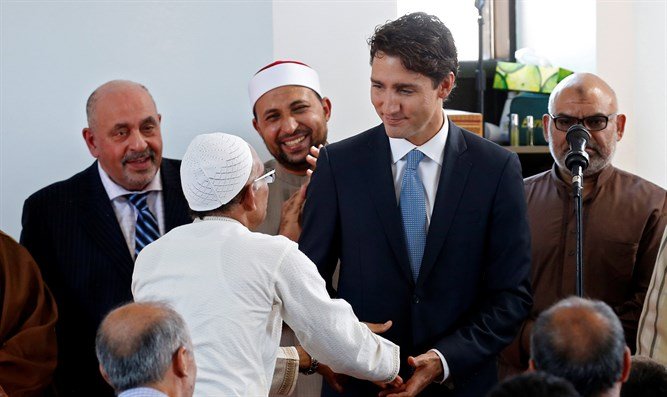 Yes or No– is the following statement not the most odd-ball proclamation of any prime minister in history?

“The Liberal Party believes that terrorists should get to keep their Canadian citizenship … because I do,” Trudeau told a Winnipeg town hall. “And I’m willing to take on anyone who disagrees with that.”

Of course it is. And therefore, it is a statement which establishment media refuse to dwell on. CAP have a simple question for CBC, Globe & Mail and the rest of Justin Trudeau’s media slaves:

Why would the leader of a western liberal democracy work to protect ISIS terrorists and murders? There must be an answer. Only problem is, Canadian media will never posit the question, or offer commentary on Trudeau’s rationale for this most bizarre statement.

Taking a sample of a statement from ISIS terrorist/Canadian citizen Abu Huzaifa Al Kanadi, patriots will gain insight into the mindset–as well as the Liberal government response:

“Abu Huzaifa Al Kanadi is the pseudonym of a man currently living freely in Toronto. Huzaifa admitted on the New York Times podcast Caliphate that he tortured one man and executed and murdered two others.”

“Despite repeatedly lying to Canadian authorities, no charges have been brought against the man who is now attending a Canadian university without any consequences.”

How Cow. What a blessing from on high it is for this ISIS murderer. He is free as a bird, quietly attending a Canadian university to improve his life while living off Canadian tax-dollars.

For context, we refer to an entirely different class of Canadians:

“Amnesty International is launching a new advocacy campaign that is putting the international spotlight on Grassy Narrows, a community in Ontario that has been dealing with the catastrophic effects of mercury poisoning for half a century.”

“Steve Fobister, who goes by Darwin, has been living with mercury-related illnesses since birth. He started having seizures when he was one and he also lives with mobility restrictions and a speech impairment. Fobister is the grandson of the community’s former chief Steve Fobister Sr., who spent his life fighting for a mercury treatment centre in Grassy Narrows.”

For Cultural Action Party of Canada, this is, in fact, the real and authentic Canada. It is post-modern Canada, “no core identity” Canada– in other words– the Canada of Pierre & Justin Trudeau.

Want more? Here is the true Trudeau Canada– a nation where mainstream media eschew truth and justice in favour of media spin in regards to the truth of Justin Trudeau’s relationship with the Nation of Islam.

READ MORE: Not a SINGLE Conviction After Trudeau Brought 60 ISIS Terrorists To Canada

So why is Justin’s post-modern Canada also a pro-Islamic, anti-Anglophone Canada? Darn good question, eh? How fortunate CBC will be addressing this issue on tonight’s 6 o’clock broadcast of “The National.”

Yes– on a cold afternoon on the plains of the Sahara desert! CBC wouldn’t touch this with a ten foot poll. As with Trudeau, advisor Gerald Butts and Somalian immigration minister, MP Ahmed Hussen, CBC have a soft-spot in their hearts for militant Islam-– arguably the most atypical, bizarre and surreal development in the history of our nation.

The answer lies not with Trudeau himself. Rather, it is a machinations behind King Justin which tell the story. For CAP, this is the story:

Justin Trudeau was first elected on October 19th, 2015. Just about every Canadian worth their salt is aware of this monumental occasion. What is infinitely less understood is that Oct 19th, 2019 is the day the Nation of Islam trans-sitioned to the most powerful and influential religious community in modern Canadian history.

Billions of dollars–literally–handed on a silver platter to the governments of Ethiopia, Afghanistan, Iraq, Syria, Jordan, Nigeria, Somalia, Lebanon and Iran.

In short, total and complete dedication to the Nation of Islam. Media say not a word about any of this information--nothing, zero.

What an incredibly bizarre state-of-affairs. Mind-boggling, really. Or it would be so–if media did not hide the truth from 37.5 million Canadians.

CAP refer to this as Justin Trudeau’s “Globalist Cabal” within government. What media again eschew is the power held by urban GTA MP’s such as Iqra Khalid, Omar Alghabra, Maryam Monsef and others.

Media have buried the fact that these MP’s are among the most powerful of forces within the Trudeau government. It is truly mystifying how these half-citizens from Islamic nations win their ridings time and time again. Do these people actually receive votes from Old Stock Canadians? Seems entirely doubtful.

CAP would say these types are among the most reviled politicians in history–yet they keep winning in their ridings. Why? Immigration policy-that’s why--apart from obvious political manipulation.

Not a chance–he won for the simple reason that Mississauga Centre is a white minority riding. We know this because we read about it in the Globe & Mail-–not!  Witness how the government and media operate in Trudeau’s pseudo- socialist nation of Canada?

Hope so–because 95% of Canadian have not a single clue of the realities exposed within this article. When government control media, you have communism–the Trudeau family’s preferred form of governance.

Thus, Canada is today a pro-militant Islamic nation. Who voted for this? Other than the voters non-profit “multicultural” organizations pushed to vote King Trudeau, not a single Canadian.

Democracy in action? Of course not–we live in a Canada with a Trudeau as prime minister. When this occurs, our nation instantly trans-itions to a pro- Islamic pseudo-dictatorship.

What form of governance is most popular within Middle Eastern nations? Why, that would be pro-Islamic, theocratic dictatorships. Coincidence?  Fellow patriots know the answer.

There are no coincidences in regard to this nefarious political agenda. The government of Justin Trudeau is pro-Islamic through and through--no question about it.

This is what Justin Trudeau has done to the good citizens of Canada. This man over-stepped the authority granted to him upon being elected PM–just like father Pierre Trudeau.

Trudeau Senior did this by unilaterally forcing “multiculturalism”( anti-Anglophone to the core), and spawn Justin did so by unilaterally entrenching the Nation of Islam within government,as well as society as a whole.

This is the untold story of a decades-in-the-making agenda of decimation targeting the Anglophone- Canadian citizens of our nation.