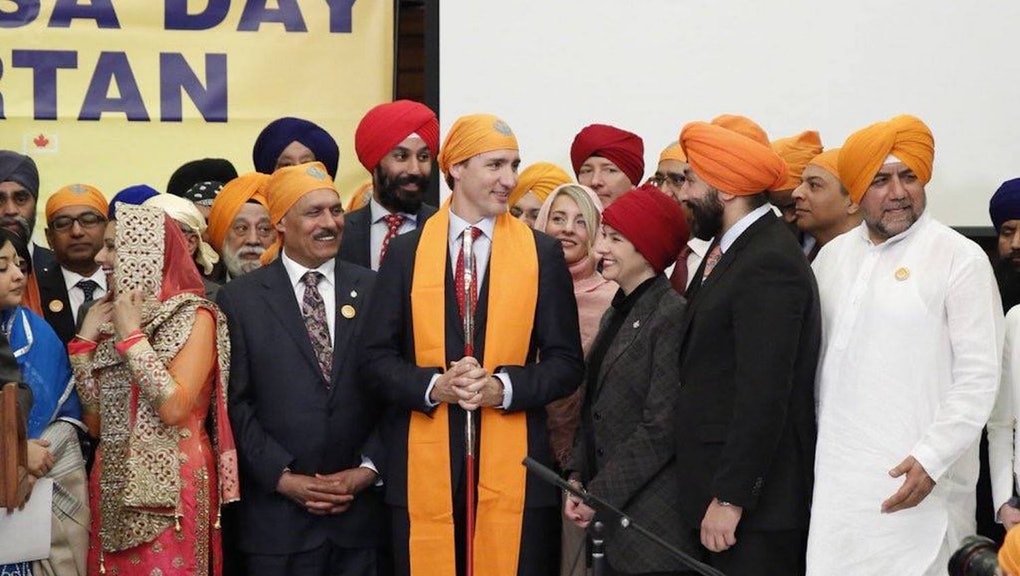 A Canadian would have to have a keen eye to comprehend the massive transformation our nation has undergone since the day Justin Trudeau seized control of the destiny of our nation.

CAP refer to this as the “inside-out” effect. Or perhaps the “upside-down” effect. Either way, what has transpired under the rule of Canada’s “King of Kings” is truly incredible.

In post-modern Canada, external, foreign entities are promoted, funded, and insulated from criticism. What is the top government priority within King Trudeau’s “No Core Identity” Canada?

— A new core is coming to replace the old core. Based upon close observation of Canadian media spin and obfuscation, CAP will guess our new core will be Third World, Sikh, Muslim, Chinese, or all of them rolled into one.

Obviously, it is already happening. CAP keep close watch on domestic versus international news production. When comparing issues such as the Coronavirus, Islamic terror and Sikh Nationalism, we witness a curious dynamic.

For example, witness the manner in which CBC have rolled out China’s latest international disease, the Coronavirus. CBC take the edge off the seriousness of the issue. Globe & Mail leave critical messaging out of article headlines. “It’s contained in Canada” say CTV-– do not worry, China is golden in our books.

How about Sikhism? Did you know that Liberal Sikh and Muslim MP’s in Ontario absolutely “cleaned up in the 2019 federal election? Try this list of winners on for size:

Degree of exposure of this monolithic 3rd World political victory— zero percent. Not one word. Therefore, CAP will conclude that mainstream Canadian media are working on behalf of China, Sikhism and Islam.

What else? Try billions of dollars sent off by Justin Trudeau to dozens of 3rd World nations— some of which are the top Christian-persecuting nations on earth. Toronto Star print not a word on the matter.

Basically, the Trudeau government is 100% pro-Islam, and therefore so are media. Canada in 2020 is not the same nation as it was even in 2010. PM Trudeau has “internationalized” Canada in an unprecedented manner. Citizenship for terrorists, huge gains in 3rd World diaspora community power. An media-endorsed attempted free trade deal with Trudeau family hero-nation of China. At least it failed.

Even worse, however, could be Trudeau’s contemplation over the Huewei 5G communications project. While the USA and Australia will not touch this thing with a 10-foot pole, the miscreant Trudeau is considering giving this branch of the communist government of China a green light on the project.

Getting the picture, fellow Canadian patriots? Perhaps some are–those who make an effort to transcend our monolithic media to arrive at a modicum of truth regarding issues of this nature.

Canada as a nation has been hi-jacked by Justin Trudeau. With each passing day, the people of Canada are lied to, deceived and propagandized by CBC into believing the Trudeau government are working on behalf of the 37.7 Million citizens of our nation.

CAP say this is 100% erroneous. Establishment media work for:

But never do they work on behalf of  “Old Stock” Canada— Anglophones, Francophones, Conservatives, Christians. As in those who are the descendants of the people who founded our country.

Rather, these communities have been trans-sitioned to the outlier communities in Canada. Only problem is–the outlier people do not comprehend this social transition. This is, of course, the way the globalist brigade want it to be. Ever recall an historical example of a community railroaded into second class or a demonized position in society who were clearly informed this is the case?

Never–and this is the predicament white Canadian find themselves in after four-plus years of the Liberal-Globalist-Third World Promotional Road Show.

As the second term of the second coming of a Trudeau family cultural assassin unfolds, Canadians of European Origin find themselves in a most precarious situation. CBC will not tell you what it is–so CAP will:

Anglophone Canada is a unique community. We are, in fact one-of-a-kind: The only identifiable group of Canadians sanctioned to be a legitimate target of racism. Ditto for bigotry against Christians–something Justin Trudeau has indulged in on many occasions.

Yes, feel free to bash away at white Canada–media does it all the time–so why not get in on the action. Don’t like Jesus Christ? Feel free to run down Young St. in Toronto shouting this out to the rooftops. Nothing will happen– no arrests, no accusations of bigotry.

But direct one word of criticism towards Justin’s chosen Islamic faith, and watch as the fur flies by way of accusations of so-called “Islamophobia.”

Canada in 2020 is in reality a “pseudo-communist” nation. Fifty more years of this covert, diabolical agenda, and democracy will be dead as a door nail in fading, former “Great White North.”

3 thoughts on “Why Canadian Media Work For China, Sikhism, Islam And NOT FOR CANADA”