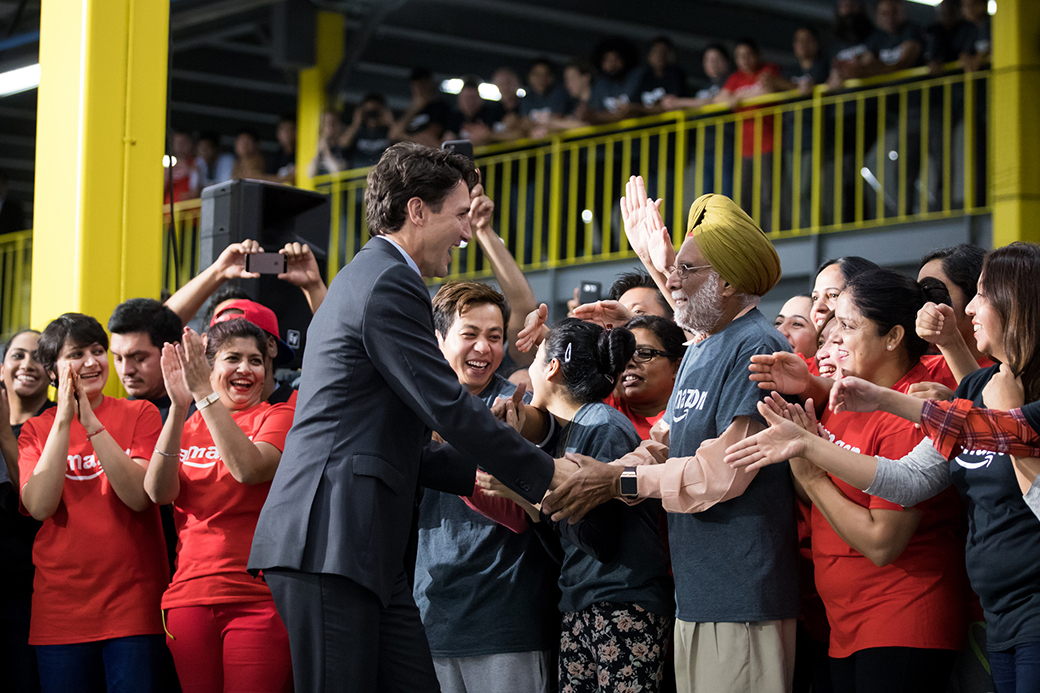 Touting Liberal values as “progressive” and “post-modern,” PM Trudeau remains wholly selective in his application of his so-called values.

In terms of Canadian media, one development continues to be ignored by the press: Canada’s demographic progression. Based on immigration policy, white Canadians are to transition to a minority community somewhere around the year 2038.

This should be cause for Canada’s Anglophone communities to consider their future within our ever-increasing pluralist society. The logic is basic– the greater the degree to which Anglo-Europeans work their way toward “minority” status, the greater their need for political solidarity.

Unfortunately, it is not a form of progress that our Liberal government has in mind. In reality, they are still back in the dinosaur days, when white Canadians dominated society in every way.

Times have changed, society has progressed, and Justin Trudeau wants to hear nothing about it. Endorsed by the Trudeau government, Premier Francois Legault is taking major steps to maintain and promote French-Canadian identity and culture in Quebec.

CAP has to wonder if residents of English Canada are seeing the situation for what it is. While the Liberals dilute the Anglo-European demographic in the rest of the provinces, a green light is provided for retention of all-things Quebecois.

“Bill 96 is the most significant piece of legislation in respect of language rights to be passed in Québec since the initial adoption of the Charter of the French Language in 1977. Bill 96 brings significant changes to the use of the French language in the province, with new requirements and potential liability for a failure to comply with them.”

We witness the cultural protection accorded to the home province of Justin Trudeau, not to mention Pierre Trudeau before him. Could the following hypothesis carry weight?

Understanding that English Canada is to be overwhelmed by 3rd World immigration, and thereby “culturally diluted,” Mr. Trudeau is facilitating the preservation of French culture in Quebec. We expand upon the dynamic:

“This November 1 marks Canada’s first official Hindu Heritage Month, a moment to acknowledge and celebrate the many outstanding contributions that Canadians of Hindu heritage continue to make to building a strong and prosperous country.”

Turns out Canada has no Hindu Heritage. What does it matter, when ideologically driven government goals lay at the root of the “Woke” Liberal agenda? The same can be said for Islamic History Month. It exists– despite the fact that Islamic culture has had no influence on the development of Canadian identity, history, or heritage.

Upon which we juxtapose these findings with Anglophone contributions to the founding and development of our nation:

“The provinces of Canada each possess sophisticated systems of governance, including legislative assemblies and upper houses, functioning according to historic, well-understood principles of parliamentary law and practice. These parliamentary traditions are largely British in origin.”

What else can be attributed to English and/or British governance in Canada?

There is something to be learned from this ironic social condition. Except for one problem: government, media and our “experts” in academia do not want Canadians to learn the lesson.

Conversely, we have Justin Trudeau’s position on our country:

Cultural Action Party has to wonder if concerned Canadians have picked up on the vibe. No one is saying our country is innocent of wrong-doing, including terrible treatment of Aboriginal Canadians. But does the prime minister have to make it an exclusive focus? Is there nothing in our history worthy of national pride?

Not according to the tenets of Trudeau’s Woke Revolution there isn’t. For seven years running, our PM has been throwing the dirt into the faces of Anglophone communities. Branded perpetual racists and homophobes by the prime minister, Anglo-Europeans are on a one-way trip to the doghouse of society.

Not the Quebecois. Not our 3rd World migrant communities. Meanwhile, media remain silent as the lambs. Coyne, Ibbitson, Selley, Hebert, Glavin, Ivison, Scoffield are the Christian names of leading journalists in Canada. All are of Anglo-European extraction; not one has the gumption(permission?) to speak of the plight of “Old Stock” Canadians.

Something wrong with this political picture? Of course there is. Degree of recognition within society? Begin at nothing, and continue till you get to zero.

Is there a solution for this? CAP believe there is: an establishment of a federal Ministry For Anglophone Rights. Now this is a progressive solution. Unfortunately, one that Justin Trudeau and his Liberal Party wouldn’t entertain if it was the last political concept on earth.

Post-modern and progressive Liberal politics ? Only when it leads to a decimation of Justin Trudeau’s nemesis communities.