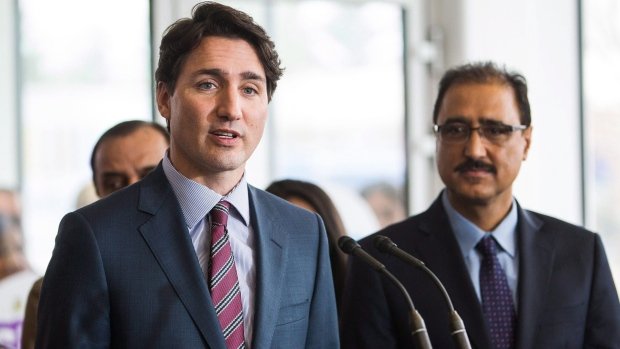 Within contemporary Canada, multiculturalism and diversity exist as a societal cornerstone. It is interesting to note, however, the degree of general public input regarding this transformative ideology.

Simply put, there has been none. Multiculturalism was never chosen by Canadians. Rather, former Prime Minister Pierre Trudeau forced the policy upon society. Beyond this, in the past forty-odd years since the arrival of multiculturalism, there has yet to be a single study or media article released which informs how Canadians feel about institutional diversity in Canada.

More specifically, there has never been a critical study of multiculturalism, nor media articles which analyze the policy in an objective manner. Where did this ideology originate? How do long-term Canadian citizens feel about this policy?

And perhaps the most critical question of all: What is the opinion of Canada’s founding peoples communities–Anglophones, Francophones, Christians and Aboriginals– regarding the success of multiculturalism?

Why is this question never asked? Why have leading Anglophone journalists Andrew Coyne, John Ivison, Margaret Wente  never posited the question within establishment media? Are Anglophones an invisible community within society, or what?

The answer, unfortunately, is yes. Beyond this lies an even more ominous point– Old Stock Canada has little clue of this reality. This is where media come in. Their job as directed by government is to never expose this reality to the people of Canada.

Anglophone Canada has meant little to nothing since the advent of multiculturalism in the year 1971. Founded by former Liberal PM Pierre Trudeau, the original intent of the program was for the purpose of levelling the social playing field for all ethnicities in Canada.

The piece missing from the narrative is that diversity has resulted in the lowering of social status for Anglophones, Francophones and Christian Canadians. This is the unspoken result. It is unspoken for good reason.

Pierre Trudeau’s multiculturalism has a dark under-belly. This piece has been buried by the three-headed hydra of globalism— government, media, and academia. The dark side involves the destiny for our Anglophone and Christian communities.

Justin Trudeau wants these folks marginalized, and during his four year tenure, he has done one hell of an effective job of it. What is his objective in this regard? Here we get to the naughty bits. Justin Trudeau is pushing a comprehensive program of selective community marginalization.

In pay-back for the colonization of Canada by our descendants– as well as the general treatment of First Nations peoples– Mr. Trudeau wants the people of English Canada to take their place as second tier Canadians. To accomplish his task, Trudeau raised immigration and refugee quotas to the highest level in history. In another critical move, Justin has elevated the Islamic faith above the Christian faith within society.

All the while, Old Stock Canada remains helpless. When an attempt is made to emulate  political organization and community pride that Third World communities are privileged to possess,  Anglo-Christians are held back from following suit. By what method? The mighty race card, for one.

Anglophone Canadians are excluded from the multicultural “banquet feast” in Canada. We do not sit at the dinner table shoulder-to-shoulder with Sikh, Chinese, or Muslim Canada. Italian-Canadians, German, Ukrainians, Irish? — say no-go.

Multiculturalism is exclusively a Third World affair in Canada. Within this dynamic, Anglo-Christians are on the outside looking in. But wait! Isn’t diversity for all communities?  Should it not be inclusive of European-Canada. It should be–but it is not.

But here is the kicker: Why, with four decade history of multiculturalism behind us, have these issues never been discussed within government, media, and academia? Is this situation really so benign that it is not worthy of discussion and debate? The thought is absurd.

Within society, what is to be the  fate of the Anglophone people of Canada? Dead silence. No discussion, no media coverage, no debate, no nothing. Just as it has been planned for decades in advance.

Another kicker: Rather than protect this community from a continuous erosion of population, power and position, the leader of our nation is leading the decimation. Justin Trudeau  wants us punished for the behaviour of our historical predecessors. How vindictive!

Every day that Justin remains prime minister is a day of disempowerment for English Canada. No, you won’t read such a thing in the Globe & Mail or National Post. CBC will continue to position Third World Canada as the “poor and the suffering,” when in truth these folks are the privileged and empowered.

Anglo-Canada will continue to be positioned as an oppressor of all non-whites, as Justin recently affirmed  by way of branding Canada “genocidal” regarding our Aboriginal communities. All this will continue for as long as Justin Trudeau remains prime minister. Under his leadership, the program is immutable.

King Justin is the fulfillment of a multi-decade globalist agenda of national trans-formation. Anglophones to the back of the bus–the new drivers are Sikh, Muslim and Third World Canada.  You may not be aware,  but within a generation your community will have trans-itioned to Canada’s “second nations” peoples.

This is to be justified by way of your treatment toward Canada’s first nations peoples. So what to do? Darn good question. The answer is to organize socially and politically. Ironically, this involves behaving in a similar manner to the political organization of Third World Canada.

Therefore, the stigma of these racist accusations must be thrown off. This is essential in order to re-establish the dignity stolen from our people  by way of Pierre Trudeau, Justin Trudeau, MP Ahmed Hussen, MP Iqra Khalid, and the rest of the Liberal-Globalist cultural assassins.

Use it or lose it folks–take your choice. Our passivity is the globalist’s victory.