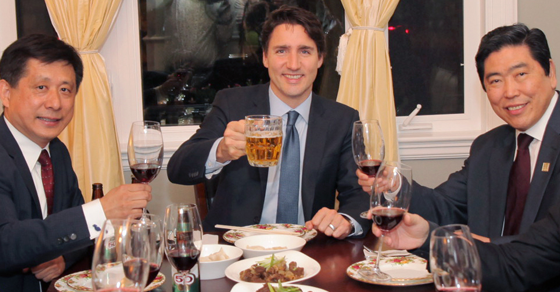 To post to facebook, click here:
One common thread throughout CAP’s daily commentary on the behaviour of PM Justin Trudeau has been the following:This Canadian political figure is the strangest, most odd-ball decision maker in the history of the PMO.
Recently, after weeks of warning Canadians to maintain social distancing, PM Justin was pictured in the media with his family “arm-and-arm” on his latest holiday.
Talk about “do what I say, rather than what I do.” A leader by example? Please–do not make CAP cough into our Tim Horton’s cups.
How about this one? While “preaching the gospel” of fossil fuel damage to be remedied with Justin’s giant carbon tax grabs, the man hired two airplanes–one for luggage and security–to usher him on yet another family vacation, this one to an island off Florida.
Who makes these major gaffes in judgement? His ” handlers” appear to be a strange lot indeed.
Now, Covid-stricken Canada receives another blast of hypocrisy–-truly a Trudeau special of the highest order:
While 37.8 Million Canadians grapple with fall-out from Coronavirus, Justin Trudeau is pumping $8.5 Million big ones–presumably tax-payer funding–to renovate his luxury home. Talk about an “in-your-face” moment for hard-working Canadians nation-wide.
Should an astute Canuck be surprised? Of course not– PM Trudeau is not your average prime minister- certainly not in the sense of the 22 PM’s who preceded him. A number of these politicians–the ones Justin never references in any capacity–actually worked for the general Canadian public.
King Trudeau is different. He is a post-modern PM, meaning he works for–amongst others– himself, United Nations, Religious fundamentalist communities, China, and the World Health Organization.

Harrington Lake, the official summer residence where Prime MinisterJustin Trudeau spent Easter with his wife and children, has been undergoing $8.6 million in renovations.

“The National Capital Commission released the new figures after CBC requested an update on repairs at the property near Chelsea, Que., 30 minutes north of Ottawa. The committed funding of $8.6 millioncomes after a 2018 report found the prime minister’s getaway needed $17 million of work done.”

Oh wow– talk about a sacrifice. Guess CAP are all confused– Mr. Justin needed $17 Million of work done, but took $8.6 Million instead. Man, this is one altruistic national leader. Heroic, really.

Now, let us speak of the 99.9% of the rest of us. As it happens, CAP can speak with authority on the street-level impact of China’s bio-disease output within our major cities.

Copious amounts of street people. Folks “bedding down” for the night in a Starbucks storefront. Anger, fist-fights, theft, boarded up clothing store, and general public consternation. Long line-ups at the local Chinese vegetable stores, as well as in front of Safeways.

Irony Of The Century: Justin Trudeau states immigration to Canada has been impeded(somehow) as a result of Covid-19. Conversely, CAP has never seen so many obvious new immigrants on our urban streets EVER.

Something the Liberal and their media puppets are not telling us? Of course–this is Justin’s “no core identity” Canada– the one where transparency trans-itioned to complete secrecy regarding the true outcome of Liberal immigration policy.

Other Ideas That CBC Eschew:

The circumstances surrounding how a wanna-be, pending dictatorbehaves. Truth: within totalitarian nations, state leaders behave as they wish, regardless of the state-of-society. This our PM qualifies for, obviously. While the people suffer, the national leader lives a life of luxury.

Is there more? Try the idea that despotic leaders rarely appear in public,and when they do, it is absolutely “calculated.” Security is in place, logistics are worked out in advance. Every action is meticulously monitored.

CAP Hypothetical: We would love to see this Trudeau fellow fly into Calgary, AB. Then, take a walk down the main shopping are of the downtown district, and see what trans-pires.

Think Comrade Trudeau would do this at this particular point in his tenure? CAP doesn’t. Also, we predict that if he did, he should surround himself with a legion of security folk to protect his unwanted self from being torn-to-shreds–verbally, anyway.

Memories of Dictatorship? No–this is not a brand of salad dressing from President’s Choice–it the stone-cold reality of the transition of Canadian PM from a purveyor of democracy, to a purveyor of pseudo-communism.

High on his perch–despite being DESPISED by average Canadians–sits Canada’s pseudo-dictator in-waiting. Former Chairman of China, Mao Tse Tung, would be mighty proud.