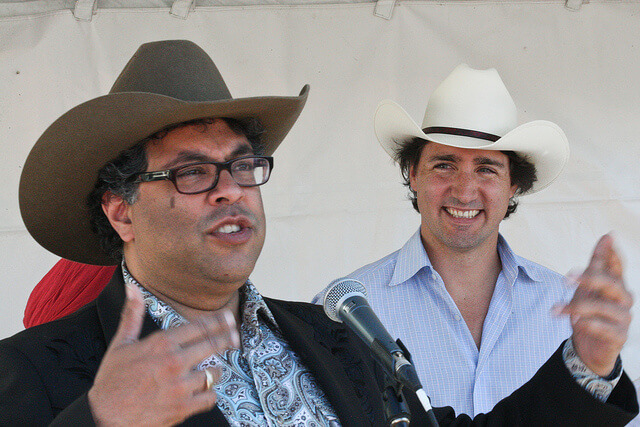 UCP MLA Drew Barnes says Alberta should hold an independence referendum alongside the next provincial election.

Speaking to the Calgary Sun, Barnes said that “many Albertans feel mistreated by the rest of Canada and a referendum would address those feelings.”

A slight under-statement, to be certain. As most citizens in western Canada are aware, Justin Trudeau’s Liberals failed to win a single seat in Alberta and Saskatchewan in the 2019 federal election. Media have not said a word about this ever since.

“Barnes estimates that 30% of Albertans support independence now, with many more considering it an option.”

Indeed, unfairness takes on many forms. In addition to Barnes public statement, CAP will add our opinion. This unfairness applies not only to Alberta and Western Canada. It is ubiquitous from coast-to-coast. Here we speak of an incredible lack of equitability between communities supported by Justin Trudeau, and those he dislikes on a personal level.

Justin Trudeau’s favouritism toward 3rd World communities and new migrants is a sight to behold. Or would be, if exposed by CBC and establishment media. Equally as astonishing is Trudeau shabby treatment of “Old Stock” Canadians— our nation’s generational peoples of European heritage.

The preference is palpable–for those who choose to drill down on the situation by way of non-Canadian, alternate and social media sources.

This we believe. Canada is in 2021 a polarized society– divided by those who oppose the Trudeau “Great Reset” globalization goal, and those who advance globalization.

Interesting to note that every darn political figure in Canada supports Trudeau’s globalist ethos. From the federal level to provincial, from MLA’s to mayors and city councillors, government in 2021 have transitioned into a monolithic entity of anti-democratic sentiment. Media follow suit by exposing absolutely nothing about this “post-modern” development.

As ominous at it appears, these elements are just one component of western Canada’s alienation from Ottawa. From CAP’s perspective, Justin Trudeau— like his father Pierre Trudeau— intentionally advances such circumstances.

It was Pierre Trudeau who instilled the National Energy Program, which existed from 1980-1984.

It was this measure which set a foundation for extracting billions of dollars out of the Alberta economy, and transferring the funds to Pierre Trudeau’s Liberal government back in Ottawa.

It was some thirty years later that another Trudeau prime minister–this time Justin Trudeau–continued the decimation with a sneaky under-the table assault upon Alberta Oil production. To this day, CBC, Globe & Mail and the rest of establishment media have never so much as hinted at a combined “father-and-son” assault upon Alberta’s energy industry.

“With the Alberta economy sluggish and no new pipelines on the horizon, MLA Drew Barnes says “he cannot help but argue for drastic action on behalf of suffering Albertans.”

“The despair and frustration is higher than ever. Albertans are telling me more and more that enough is enough. Albertans are ready to push and take some risk.”

Doing the same thing over and over and expecting different results? A waste of energy at the best of times. When dealing with a Trudeau-led Liberal government, it is an act of futility bordering on the insane.