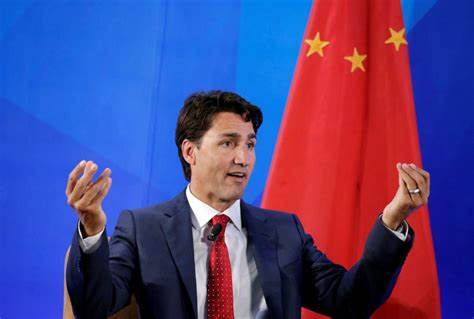 WeChat, China’s government-controlled social media giant, has made up its mind which party they want to win the Canadian federal election on September, 20th, 2021:

“Please vote for the Liberals and use your power in the Chinese community so that we can have a chance to influence the future of Canada.”

A more realistic picture reveals what Canadian media has never done: the communist government of China has influenced our past, is influencing our present, and will influence our future.

The conduit for this covert infiltration is the Liberal Party of Canada. The process began in the year 1970, after ex-Liberal Prime Minister Pierre Trudeau became the first western dignitary to meet with China’s founder of the Quiet Revolution, Mao Tse Tung.

“Quiet” has been the agenda ever since. For the past half-century, establishment media has obfuscated the relationship between China’s government and the Liberal Party of Canada.

“As long as we ethnic Chinese unite, resolutely do not vote for those crazy sinophobic Conservative candidates and cast your precious votes for the Liberal candidates in your ridings, we will surely defeat the Conservative Party.”

The obvious question being– who are “we?”  Sounds like Chinese authorities are blurring the lines between Chinese and Canadian nationals– something far more apropos than the average Canadian citizen would believe.

Let Cultural Action Party call a spade a spade: the government of China is a geo-political pariah. And not only toward Canada. Under a covert operation(by Canadian media standards), China is entrenching their presence in countries around the globe.

Also targeted in a more subtle fashion are Canada and Australia. The political party in Canada which most accommodates the expansionist philosophy is the Liberal Party. In historical terms, no Canadian prime minister has accommodated the will of China more than Justin Trudeau.

Simply put– he’s their man. Therefore, they want him to win. If some Canadians consider this to be a benign political force, time to think again. CAP will go as far as to say that China’s will is as important– or possibly more important– than the collective voting power of 38 Million Canadians.

As if it couldn’t get more menacing than this. Unfortunately, it can. Not only has China’s influence permeated Canada by way of the Liberals. We will take one step beyond by stating that Trudeau and team are in fact emulating China’s style of governance.

A key example being found in the concept of media working on behalf of government– a hallmark of communist methodology. The very reason why our citizenship is not enlightened on the Liberal-China relationship.

When I look at the subtle but intense influence of China on Canadian institutions — parliaments, provincial governments, local governments, universities, the intellectual community, the policy community — it makes me deadly worried.”

If Mr. Hamilton is correct, would it not be incumbent upon media to illuminate the minds of Canadians in this regard? They have never done so.

What to conclude? For those who read this article, perhaps perspectives will be altered. Beyond this lies a world of covert collusion between Justin Trudeau, the Liberal Party, the government of China, and their representatives on Canadian soil.

It is a world apart, and likely to stay that way until it is too late to prevent Canada’s transition to a non-democratic society.