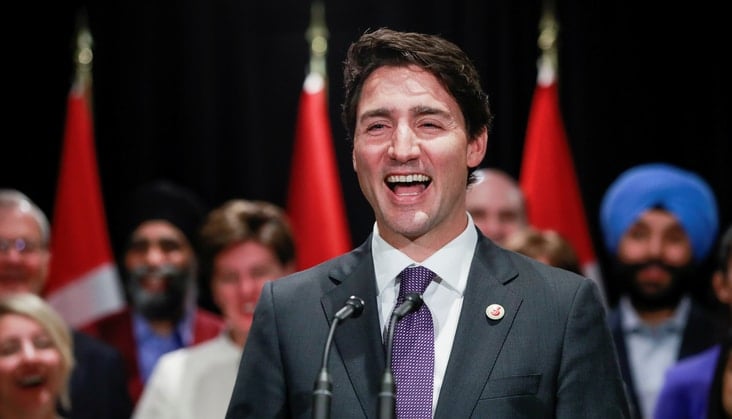 “That increase was predominantly due to 154,820 new immigrants who settled in Metro Vancouver between 2016 and 2021, most of them coming from India and China.”

Back in Ottawa, power-player Liberal government politicians are over-the-moon. The demography manipulation project is working, and concerned citizens can bet PM Justin Trudeau and his gang of woke globalists are thrilled about it.

One down– nine to go. We speak of the quantity of major urban centres in Canada. To be followed by small towns and rural communities. One day, whites will transition to minority communities in all these locations.

Strange how Canadian media approach this topic. Namely, they don’t approach it at all. Statistics Canada recently released its latest demographic study. Reviewing coverage from CBC, CTV, Toronto Star and National Post, not one speaks of a tangible by-product of PM Trudeau’s immigration policy:

The transition of Canadians of European origin- Anglophones and others– to a bona fide minority community. Blimey– it’s as if such types don’t exist. One day in the future, perhaps it will become a reality.

Media are unconcerned. In Trudeau’s “no-core identity” society, our press have more pressing concerns. Anti-racism programs in our schools. Dreaded “Islamophobia” and all it entails. Prejudice against homosexuals, oppression of transsexuals.

For Justin Trudeau and his “just-flew-in-from-Davos” Liberal Cabinet, all these concerns take priority over the erosion of Canada’s European-derived population.

Are Euro-Canadians seeing the writing on the wall? Justin Trudeau hopes we do not. For this purpose, he is financing legacy media. Under the control of the Feds, the press obfuscate the demise of our communities.

What a wicked game they play. Behind-the-scenes, all the desires and dreams of Justin Trudeau are unfolding. Mr. PM can now taste our demise on the tip of a forked tongue.

Media say nothing. Our Marxist infused educational institutions will, of course, remain mute. Even alternate media will not touch this one. So there we sit– silent, powerless, devoid of possibility of demographic reversal.

“I just think it talks to how our community is changing,” said Andy Yan, director of Simon Fraser University’s City Program.

A silly, puerile comment. Yes, Andy Yan– our community is changing. Whites are a minority in Vancouver, as they will be in all major urban centres within 30 years.

Call CAP paranoid. Many have and will continue to do so. Still, we can’t help conjuring up images from 20th century European history. In each case of demographic decimation, silence ruled the roost. People don’t talk about it. Entire communities have disappeared without recognition of the fact.

Is this what Justin Trudeau is up to in Canada?

“The municipality with the highest proportion of people identifying as a visible minority was Richmond at 80.3 per cent, followed by Burnaby, Surrey, Coquitlam and then Vancouver at 54.5 per cent.”

Why should CAP be forced to deliver such trite commentary? Richmond B.C. is 20% white— a minority community if we ever saw one. Vancouver Sun do not word it in this manner. The decision is fully intentional, as it is within all Liberal-funded press publications.

“Don’t mention whitey” being the operative. Is this fair and just? How absurd it is to speak of our Liberal government’s “progressive” proclivities.

True, or not true? If the Liberals were truly progressive, they would admit that their immigration and refugee policies have progressed to the point where Canada is morphing into a minority-white society.

Turns out they have no use for this form of progress. Theirs is strictly a “pick and choose” dynamic. Progress in the Anglo-decimation ticket is omitted from government and media narrative.

We move to a high-level picture. All of this is the result of federal government policy. Upon gaining office in 1968, ex-Liberal PM Pierre Trudeau was responsible for shifting immigration patterns from 90% European-based to 90% 3rd World-oriented. Some forty years later, Liberal PM Justin Trudeau establishes the largest immigration quotas in modern history.

In 1982, the government of Pierre Trudeau established the immigrant/minority-centric Charter of Rights and Freedoms.  In 1988, Multiculturalism became official policy.

Put it all together, and what does it spell? How about…the demise of English Canada? Turns out the Trudeau family–all of them– has never much cared for Anglo-Canada.

As a result of Trudeau-family policy and those who buy into it, white Canadians are to transfer to a minority community. Since media abstain from the topic, they have the privilege not to go where CAP goes:

When our communities shift to minorities, will they then become privy to minority rights in Canada? We imagine the scenario, as expressed in the Globe & Mail:

Not only will future Canadians never read such a headline. The chance of allotment of minority rights for Anglos lies between zero and nothing. It will never happen.

No wonder a gleeful Trudeau prances around the planet with that smug expression on his face. He and his half-citizen cosmopolitan Cabinet are likely to win this war. What’s to stop them? Pierre Poilievre?

Given the greed of the globalists, it’s unlikely to occur. Between Liberal government deception and media propaganda, the Conservative leader may well be wiped from the map.

Anyone up for an anti-Anglophone Canada in which these communities transition to second class citizenship status? Heck, we did it to First Nations, so doesn’t Justin Trudeau have the right to do it to us?