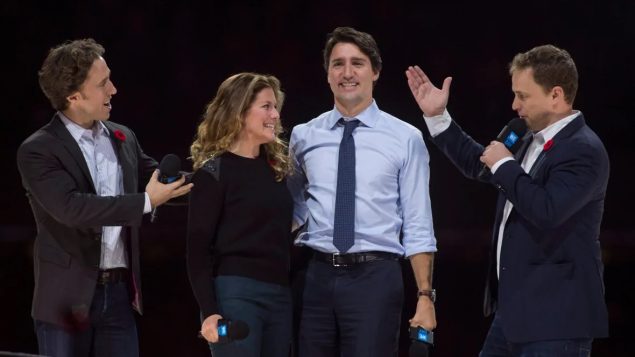 Everyday for the past five years–concurrent with Justin Trudeau’s ascension to saviour status for the “downtrodden” of the world– CAP has been investigating government activity.

During this time frame, we have witnessed what we believe to be the most transformative social dynamic in Canadian history. The reason general society does not pick up on this unprecedented historical trajectory is indeed manifold.

Media, of course, is the number one method of obfuscation. For example, CBC fail to inform 37.8 million Canadians that our country is in transition from democracy to dictatorship.

Media fail to do this because they are in 2020 an arm of government. In post-modern Canada, there are specific parameters which media cannot diverge from. A good example can be found in media being prevented from offering opinions which do not paint the Nation of Islam in a positive light.

How does a billionaire type gain ultimate power over a western democracy? CAP choose to keep this very simple. These are indeed complex situations, and therefore we will put aside the hyperbole to offer one basic theory:

When globalist billionaires such as Bill Gates make a fortune, they can utilize charities as tax-write offs. This way, their “net income” is so much lower, and therefore better for them in terms of taxation.

In the “old days” it is fair to say a modicum of benevolence existed among these not-for-profit organizations. Even within Craig Keilburger’s WE Charity initiative, good intentions may have once driven their agenda.

Those days are gone. WE Charity, George Soros’ Open Border Foundation--as well as as those African-oriented charities with sad faced children are no longer what they once were.

In 2020, these so-called charities may well be controlling the planet. It is therefore no surprise that western media have covered up the entire affair. We can see how this globalist game has rolled its way to giant success. The methodology is in fact, typical globalist subterfuge.

Make it appear that all this goes on to benefit the “children, the poor and the weak of the 3rd World.”

Simply put, CAP believe this to be one massive deception. The reality is a power-grab of magnanimous proportions: a grand ploy of which Justin Trudeau is a key player.

One idea which sticks with CAP  is that Justin Trudeau aspires to become one of these billionaire globalists— which he could well be by now. This non-profit sham is in truth a bid for “control of the world.” As such, we believe this is everything in the world desired by Justin Trudeau.

His drive for power is never-ending. There is no ceiling where satisfaction will be attained. It is pure megalomania-– devoid of ANY concern for the “average” Canadian. 3rd World Canada–yes, for certain. But the rest of us? CAP look at this in an allegorical manner:

Trudeau is not unlike the Pharoah-Taskmaster out of the biblical book of Exodus. But this time out, the slaves are Anglophone/European-derived Canadian tax-payers.

Perhaps a simple metaphor will suffice: Imagine a cocktail party for those who today control the destiny of our planet. George Soros is there with his son– a friend of Liberal MP Ahmed Hussen–also in attendance. Craig Keilburger is sipping on a Shirley Temple, while Bono discussed abortion in Sudan with Bill and Melinda Gates.

In the next room, you have the oil money Middle Eastern contingent. Bill Clinton is hosting this group, as dietary laws force a slight separation of individuals.

What is being attempted here is to describe the “new globalist order” controlling Canada and other western nations. Angela Merkel of Germany and Emmanuel Macron of France–every bit as locked-in as King Justin– would be at the party as well.

So it is once again that globalism in disguise is busting a move worldwide. Tell CAP, Mr. Liberal-Snowflake— who doesn’t want to help the poor, suffering children? How does one condemn such a thing?

It is here informed Canadians witness the hypocrisy, deception and subterfuge. Think about it– is it not true that if Canadaland did not expose the WE Charity scandal in the first place, the whole affair would have rolled by without a single blemish.

Margaret Trudeau, Sophie Trudeau and Alexandre Trudeau would have all been “paid in full” without a single sentence of media condemnation. It was all benevolent “sunshine and roses” for Justin Trudeau--until his family got caught, that is.

Hoodwinked, once again. Taken as a whole, Trudeau-Globalist deception and media cover-up in transitioning Canada from a free and democratic society into the form Justin, Alexandre and Pierre Trudeau most desire for our nation– China-style Communism.