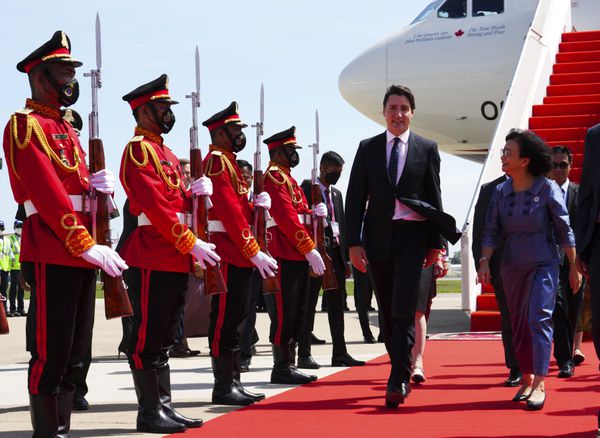 What a festival it was as PM Justin Trudeau concludes his recent trip to Asia. While it’s a tad early for Santa Claus, the Canadian prime minister just concluded a giant pre-Christmas giveaway in Asia.

Attending the ASEAN summit in Cambodia this month, Mr. Trudeau’s gift-giving is a sight to behold. That none of it benefits Canadians is something mainstream media chose to overlook– for good reason.

Trudeau is treating CBC and corporate media in the same way he treats so-called “developing nations.” If media spoke the truth, they would tell taxpayers that developing nations includes some of the world’s most powerful countries:

As such, China qualifies for foreign aid– from Canada!  In 2021, China was the richest developing country in the world, with a total GDP of $17.73 trillion.

Crikey–even Iran makes the cut as far as Liberal government foreign aid payouts. CAP take time out to list the countries which qualify and receive foreign aid from the Trudeau government:

Quite the line-up, eh? Did you know? Upon the placement of Justin Trudeau on the throne of post-modern Canada, the PM increased funding amounts to every one of these countries. Perhaps it was payback time for their government’s assistance in placing our PM atop his neo-communist perch.

“Prime Minister Justin Trudeau unveiled a slew of funding announcements in Cambodia on Saturday, Nov.12, 2022 aimed at deepening economic and academic ties with Southeast Asia, after decades of sporadic engagement with the region.”

Interesting to note how Canadian media position “deeper ties” with foreign governments. In the real world, this tax-payer funded quarter-billion dollars constitutes more of a gift than anything else.

“The largest chunk, $133 million, will involve feminist-focused development aid in ASEAN countries, a quarter of which will be earmarked for Canadian civil-society groups.Ottawa will also spend $84.3 million for a new Shared Ocean Fund aimed at cracking down on illicit fishing in the region.”

Illegal fishing in Cambodia? Canadians, meet the top priorities of our ruling government. Next on Trudeau’s travel card: Djerba, Tunisia.

The Prime Minister will participate in the Sommet de la Francophonie Plenary Session II, entitled “Women and Youth, Priority Targets of the Francophonie.”

A closer look speaks volumes– a volume that Canadians are not be privy to. Justin Trudeau just launched a giant promotion of French language development in Southeast Asia.

8:30 am: The Prime Minister will participate in the Sommet de la Francophonie Restricted Plenary Session III. 11:00 am: Trudeau will hold a bilateral meeting with the President of Niger, Mohamed Bazoum.

Justin’s latest taxpayer giveaways? Try $65 million for Women’s Right in Mali and Burkina Faso. A cool $20 million for French cultural advancement in “developing countries” of the 3rd World.  90% of citizens in Mali are Muslim; 63% in Burkina Faso.

CAP wonder if readers notice what is omitted under all these circumstances. Yes, Canada is your answer, but it’s not quite as simple as this.

What’s really missing is anything and everything related to Anglophone Canada. Citizens outside of Quebec may have trouble recognizing a fundamental shift within la belle province.

‘Bill C-13 Coming Under Fire From Anglophone Communities In Quebec’

Bill C-13 seeks to foster and protect the use of French in federally regulated private businesses in Quebec,” as written in Section 54 (4).  Some fear that the promotion and protection of French comes at the expense of English.

Have you not heard the word? Everything that goes on in Trudeau’s Canada comes at the expense of English Canada. Everyone else takes top priority: French culture, French language, French sovereignty. Cambodia, Burkina Faso, Mali, Iran, Iraq, Afghanistan, Pakistan.

Everything but English Canada. Does Justin Trudeau hate this segment of society? In practice, he works to decimate our cultural existence. And why not? Anglos did it to Aboriginals; therefore whitey is fair game. Forget the fact that French colonists arrived previous to the British. Justin is Quebecois. He pays the bills for legacy media, they omit this pertinent fact.

Can it be that this Trudeau character is presently engaging in the “running of the Anglophone?” As in, a systemic transition of Canadians of European heritage(French excluded). Is Justin Trudeau so full of hatred for Canadian heritage that he would do such a thing?

CAP answer in the affirmative: yes, this man is fully capable of such an agenda.

Pourquoi? Because our PM is not a “prime minister” in the traditional sense of the word. He is a post-modern revolutionary. Working the agenda of Klaus Schwab’s World Economic Forum, Mr. Trudeau has big plans for Canada. So big that establish media won’t speak of them.

None of his plans include dignity for our “Old Stock” populations. Trudeau is gunning for a full societal inversion. 3rd World communities to the top of the totem pole, Anglos to the bottom tier.

Justin Trudeau: The Man Who Supports Everyone On The Planet– with an exception of Anglophone Canadians. Add to it our Christian communities, certain to be down-and-out in a 3rd world dominated future society.

Truth is, Canada already has a new identity. As entrenched by a second communist Trudeau prime minister, Anglophone Canada is now in complete free-fall. Media say nothing.

500,000 migrants per year from the 3rd World. Shrinking birth rates for Anglo- Canadians. Euthanasia for the elderly(Justin T), abortion for the young(Pierre T).

Quebec culture reinforced. Fishing in Cambodia looking good. A federal government holding 3rd World culture and religion in high esteem. As for Anglos, they are as meaningful to Justin Trudeau as yesterday’s trash.