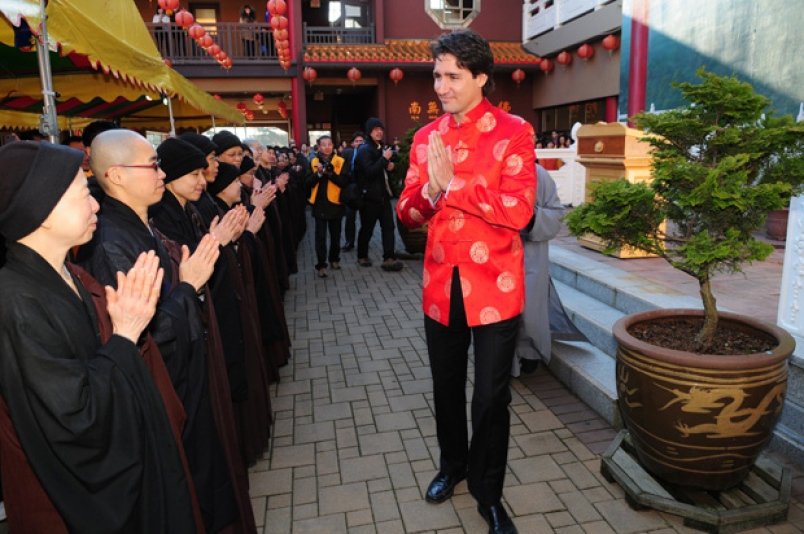 At what point do a series of so-called coincidences transition to validation of a theory? Applied to Canada’s political trajectory under Prime Minister Justin Trudeau, the inquiry becomes too much to bear.

We map out some critical elements:

— In 1971, Pierre Trudeau becomes the first western leader to establish diplomatic ties with communist China. This is quickly followed by his unilateral implementation of Multiculturalism, catalyst for mass migration from the Far East nation.

In 1978, the Chinese-Canadian Business Council is established. It’s creation is a Quebecois-centric affair, as developed by Pierre Trudeau along with Quebec’s Power Corporation, controlled by the billionaire Desmarais family. Various Bank of Montreal(BMO) executives sit on the Board of Directors.

— In 1988, Multiculturalism becomes official government policy. Subsequent to the legislation, hundreds of thousands of migrants from Hong Kong arrive in Canada.

In 2015, Justin Trudeau becomes prime minister. He immediately pursues an establishment of a Canada-China Free Trade agreement. It fails– but the story is far from over. Away from the media spotlight, a transformation is taking place.

Rather than partnering with China on a business level, our country begins to emulate China on a governmental level. Of course, when we say “our country,” we mean Justin Trudeau and the Liberals. As far as “the people” go, citizens have well-defined opinions on the hero-nation of the Trudeau family.

A Research Company Poll taken in January, 2022 delivered the news:  68% of Canadians have an unfavourable opinion of China, a proportion that climbs to 73% among men, and 81% among Canadians aged 55.

Degree to which Justin Trudeau takes the statistics into account: 0%. Instead, he walks Canada down a path toward emulation of China’s governance. Tragic it was that rationalization for doing so also from China: the Covid pandemic.

Extent to which legacy media reflect these circumstances? A grand total of nothing. Moving to present day, we find Trudeau’s emulation of authoritarian governance reaching an apotheosis.

The confrontation between truckers and police in Ottawa is Canada’s Tiananmen Square. Witness as Justin Trudeau’s sunny ways morph into dark days of neo-totalitarianism. Next, note how media eschew every aspect of this reality.

The manner in which Canadian media are handling the protests is but one step short of government-media relations in China. Has Justin Trudeau been working for the past six-plus years to make all this become a reality?

For Cultural Action Party, it is the Godzilla of questions. Can it all be coincidental? Or rather, is what we are seeing in the streets of Ottawa indicative of a pre-planned  transition from democracy to dictatorship.

CAP wish we knew the answer. Either way, Trudeau’s proclamation of Canada as a “post-modern” society has become reality. Interesting it is that upon issuing the statement, our PM didn’t bothered to define its meaning.

Little did Canadians know what was coming down the pipe. Does post-modern mean post-democratic? How about post-personal freedom? Anyone for post everything Canada was founded upon? If so, what we have on our hands is a revolution. Not one administered by the public, but rather by government. Since media have kept this under wraps, it can be fairly referenced as a “silent revolution.”

During China’s Cultural Revolution— also referred to as the Quiet or Silent Revolution– Chairman Mao Tse Tung “threw China’s cities into turmoil in a monumental effort to reverse the historic processes underway.