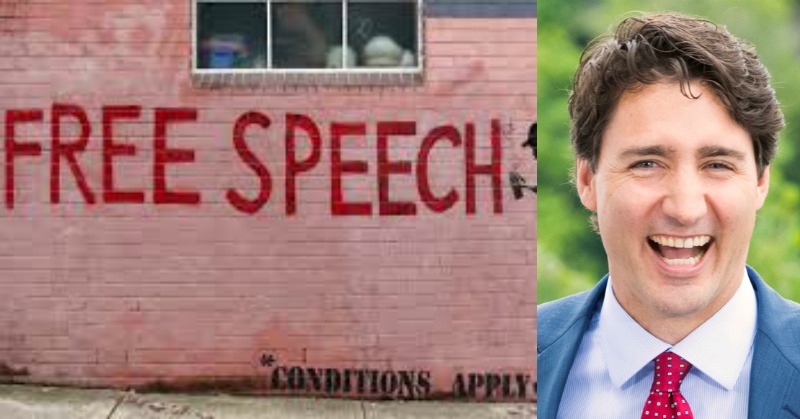 Are Canadians being hoodwinked to the degree in which our nation is comparable with China and Iran– but we don’t realize it? Is the status of our country as a Liberal Democracy being relegated to the dustbin of history?

Perhaps European Union politicians who slammed PM Justin Trudeau as a dictator last month are onto something. It is with never-ending perplexity that those in the know recognize an ominous circumstance: as Canadians, we are sitting back and taking it. Every bit of it. Seems that sunny ways have transitioned to a lock on society. With NDP party leader Jagmeet Singh gifting Mr. Trudeau with political control until 2025, Canadians should expect more of the same. Or likely, a ramping up of all pseudo-dictatorial government initiatives.

According to Canadian Civil Liberties Association analysis, the Liberal’s censorship proposal is bound to result in other democratic countries establishing similar laws. What a blessing this is. Not only would Canada become the leading internet police state of the western world– others would likely follow in our footsteps. As published  by the Toronto Sun, the CCLS submission states that “many countries look to Canada as a mature liberal democracy, and may seek to emulate the tools developed for tackling online harms here.”

If a mature liberal democracy can be interpreted as a western nation transitioning to an authoritarian state, the CCLA are correct. Cultural Action Party said it from day one: the days of democratic governance in Canada are numbered.

Feedback from Twitter has warned that the Liberal’s censorship framework “sacrifices freedom of expression to the creation of a government run system of surveillance of anyone who uses Twitter.” As published this week in the National Post, the Liberal government refused to release 422 submissions received from Social Media companies, Telecoms and other technology players:

“Only those submissions that stakeholders chose to release themselves were available to public and media. Responses to the Liberal government’s proposed online harms bill from companies including Microsoft, Twitter and Canadian telecoms are among the hundreds of submissions Canadian Heritage refused to release.”

Like a rock, Heritage Minister Pablo Rodriguez continues to defend government’s neo-communist internet model. “It’s back to the drawing board” states Trudeau’s right-hand man of free speech eradication. Translation: they will never give up on this. For the Liberals, morphing the internet toward the most restrictive standards in the western world is a do-or-die scenario.

This situation is light-years from Justin Trudeau’s “fringe element of society” objection to the Ottawa Trucker Protest. This time, the conscious objectors are Microsoft, Twitter, and Canada’s leading Telecom corporations. If this isn’t a revelation of the neo-communist tactics, what is?

In its submission, Twitter said the government’s proposal lacks even “the most basic procedural fairness requirements you might expect from a government-run system such as notice and warning.”

”Canada’s largest telecoms also wrote to the government in a joint submission. Bell, Rogers, Shaw, Telus, Cogeco and Quebecor said they were strongly in support of the government’s move to exempt telecoms from the new legislation.”

According to Brian Lilley in the Toronto Sun, “the possibility that this could quickly turn to political censorship is all too real. Giving any government these sorts of powers should be a non-starter for all Canadians.”

Mr. Lilley stops short of addressing a critical issue: can the “non-starter for all Canadians” status make any difference? It’s a disservice to assume that it could.  Under the iron-clad rule of Justin Trudeau, our general population has not one iota of influence upon government.

Our “free and democratic” country is now being lumped in with China and North Korea— and still we do not get the picture. If this transformation is similar to previous game-changers like Multiculturalism, one day we will. This day being long after anything can be done to prevent the establishment of neo-communism in Canada.