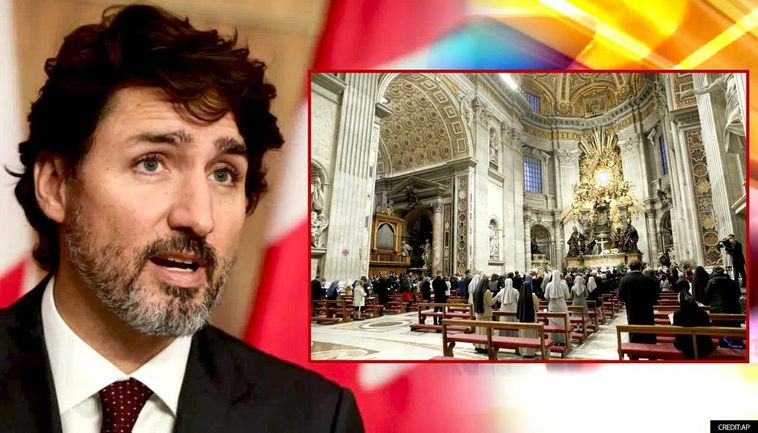 With violence raging in the Middle East, a by-product of social concern has arisen within Canadian society. Cultural Action Party takes no sides in the current Israeli-Palestinian conflict. Our position is clear: the death of the innocent is wrong.

CAP’s focus is Canada— our culture, identity and heritage. Our opinion is that Canadian immigration policy is eroding this very thing–particularly as it comes to English Canada and our Anglophone communities.

When considering what occurs upon Canadian soil, we have definite thoughts: our ruling Liberal government maintain a tangible social bias. No one in history has advanced this phenomenon as much as Prime Minister Justin Trudeau.

Knowingly and of his own volition, PM Trudeau has transitioned Canada into pro-Islamic society. The inverse effect upon other religious communities is palpable. Or would be, if mainstream media reflected the reality of life in 2021 society.

“Protesters denounced the violence and injustices against the Palestinian people amid the escalating conflict between Israeli forces and the Hamas militant group.”

As informed citizens are aware, this conflict has existed from the moment Israel was founded in 1948. Protests of past decades in Canada have come and gone.

Of course, times change. Immigration policy has resulted in the swelling of the Muslim community in Canada. As advanced by Justin Trudeau, political impact has risen dramatically. Hundreds of non-profit organizations have formed. Their influence upon Trudeau and the Liberals is profound.

Many more are to come– Syria, Pakistan, and Iran being among the top source nations for migration to Canada. CAP are not here to condemn these people. What we deliver is a condemnation of Justin Trudeau and the Liberal’s blatant community bias.

The examples could fill an abridged version of the Synoptic Gospels. In terms of religious priority, an inversion has taken place–  Christianity has taken a back seat to Islam. This is manifest by way of the trio of top social influencers: government, media and academia being united in ideological perspective.

One microcosmic example is found in the area of public protests within pandemic-saturated Canada.

Saturday, May 15, 2021– “Thousands protest in downtown Toronto in solidarity with Palestinians”

This article from CTV News mentions not a word regarding the illegality of the protest as a by-product of the pandemic. It is completely devoid of allusions to health concerns, a breach of the law, or anything other element which typically colours media presentation on crowd-gatherings in the Covid-era.

Conversely, as many are aware, the pandemic plague has been cause for an all-out assault upon gatherings of Christian nature. Churches shut down, Pastors escorted to prison, tickets handed out with impunity.

“Muslims around the world are celebrating Eid al-Fitr, marking the end of the 30-day religious holiday of Ramadan. On Thursday morning, an Ottawa Mosque welcomed hundreds of carloads of worshippers to three drive-in gatherings to observe the holiday.”

A glaring contrast in community treatment this is. Put it this way– if Justin Trudeau was a tailor, a “one size fits all” policy would not be found in the fine print.

“Pro-Palestine demonstrators outside Toronto’s Israeli Consulate were not ticketed even though some did not wear masks or follow social-distancing protocols.”

These people can demand all they like, but from a high-level, long term perspective it will make no difference. Under the iron-clad control of Justin Trudeau, the destiny of Canada has turned into a pillar-of-stone.

In the same manner as Anglophone-Canadians are being incrementally transitioned to the periphery of society, so it is for Christians. Due to the step-by-step methodology of our nations transition from democracy to dictatorship, the Jewish community may well be next.

Some will recall Justin Trudeau’s “post-modern” proclamation that he delivered upon election in 2015. The sly delivery, the portentous manner– indeed, there was more than meets the eye suggested at the moment.

Trudeau being himself, he has the luxury of making the statement without media pushing him for his exact meaning. Therefore, concerned Canadians can only guess as to the meaning of his oblique statement.

Here is CAP’s guess: Justin Trudeau is in the process of committing a national social inversion. To the top of the totem pole, leftist globalism, pseudo communism, anti-nationalism, 3rd world nations.

To the bottom will have: “Old Stock” Canadians, our traditional religious communities, democracy, freedom of speech, will of the people.

“So let it be written, so let it be done” being the mandate of the ruling government of our nation.