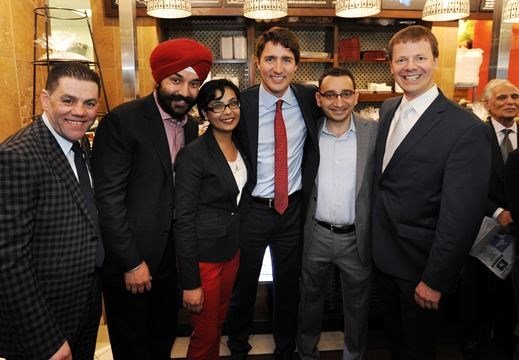 A jury found Abdulahi Hasan Sharif guilty  on all charges including five counts of attempted murder, after a three-week trial that was in part defined by what wasn’t before the jury.

The 32-year-old was accused of ramming Const. Mike Chernyk with a car, stabbing him and later leading police on a high-speed pursuit through downtown Edmonton in a U-Haul truck. The truck collided with four pedestrians during the chase, all of whom survived. Sharif was convicted of all 11 charges he faced.

CAP Analysis: Researching this case within establishment media reveals  interesting results. When scouring current articles regarding the background of Somalian Refugee Multiple Murderer Abdulahi Hasan Sharif, few of the recent articles mention the fact that the murderer is a Somalian Refugee.

Apart from a National Post article, CAP could only find this information included in a September 28, 2018 article from the Edmonton journal.

Pourquoi? Why is this critical information sublimated this time around? CAP has theories. Could one reason be because Canadians Minister of Immigration is also a Somalian refugee?

“Racism!” screams National Council of Canadian Muslims. CAP has a response for them– “ya, whatever.” Frankly, Mr. Old Stock Canada Tax-Payer Funded ethnocentric non-profit organization--we couldn’t give a damn! CAP does not buy the racist tag label agenda– that’s a rule.

So media are holding back the true identity and background of one of Canada’s chosen–a Third World refugee. For whose benefit? As usual within Trudeau’s post-Canadian Canada, for the benefit of the Third World communities, the Nation of Islam, and their diaspora Muslim communities in Canada.

Hypothetical: If Ahmed Hussen, Somalian-Islamic refugee himself, was not immigration minister, would the same results occur? CAP do not know. However, what we can confidently state is that general bias in favour of Hussen’s chosen Third World community is inherent in this half-Canadian’s approach to immigration, multiculturalism, die-versity and refugee status in Canada–no question about it.

Why is this man immigration minister? Because Justin Trudeau placed him in the role. Generally, the wisest decision–one which is equitable for all Canadian ethnic and religious communities is to appoint a neutral, unbiased person as migration minister.

Did King Justin do this? Not in the least. Rather, he appointed what CAP perceive to be the most biased figure ever to hold office–other than Trudeau himself.

Like many adults, MP Ahmed Hussen is a man who enjoys his hobbies. Unfortunately for Old Stock Canada, one of his favourites is branding white people racists and bigots. Another essential past-time is crying “Islamophobia” when a Canadian says something counter to Hussen’s desire to establish Islam as Canada’s dominant religion.

Heck, even questioning this African refugee about illegal migration budgets brings his branding of whitey as racist xenophobes. Touchy, isn’t he?

And now for something completely different: Edmonton Journal says the killer is “mentally ill.” Holy Cow– CAP is blown-away. Seems like according to Canadian ene-media, there is no such thing  as an Islamic killer who is not mentally ill. Surely-To-Sherlock there must be at least one sane terrorist murderer somewhere in the world. Try looking in Somalia, media Einsteins.

So the Trudeau government and their media-puppets prefer to obscure truth refgarding the identity of the convicted killer rather than deliver the full truth to 37.5 million Canadians. Whose side are these people on, anyway?

What can a patriot glean from this scenario. What CAP see is an incongruous, absurdist dynamic whereby Old Stock Canadian media are damaging their own people, while advancing Third World, Sikh and Islamic-Canada.

For CAP, this smells like globalist conspiracy material. This is Liberalism, post-modern style. It is Justin Trudeau, Gerald Butts and MP Ahmed Hussen. If fair was fair, Trudeau’s Party would alter its name to encompass what his party truly represents.

CAP Theory: This is the agenda of back-room commie schemer Gerald Butts, PM Trudeau’s top advisor. You see, the Liberal government of Canada is in truth the Third World Government of Canada. Anglophones, Christians, Jews– you are actually not a part of Trudeau’s Canada–you just don’t know it…yet.

Perhaps these people never will to come comprehend this. Enter establishment media, stage right. Their job is to cover-up, spin and obscure this profound social reality.

They are doing a fine, fine job. 95% of Canadians have little clue of this nefarious development. That’s what Justin pays them the big bucks to accomplish, and they do so with great skill.

Anyone remember the dead 13-year old, Marrisa Shen of Burnaby, B.C.? “Out of sight, out of mind,” eh? She was allegedly murder by one of Trudeau’s chosen Syrian refugees. Why do we say alleged? Because media has buried the story–no one knows if the Syrian was convicted or not. How sweet for young Marrisa’s family.

Anyone recall the case of the “Danforth Murderer?” This fellow was also a Syrian refugee. Despite a plethora of evidence suggesting ties to militant Islam, media informed us this was false, and that in fact, the fellow who murdered two teenage Canadian girls in cold blood was– ahem– “mentally ill.”

How bogus this whole thing is. How Justin Trudeau. Remember, Mr. Justin believes Islamic terrorists must get to keep their Canadian citizenship. Looks like he is also a fan of protecting and coddling those who knock off teenage Canadian girls–bravo, Mr. “Freak Of The Week.”

Then, King Justin wins a second term in office. On a personal note, this writer’s background is 100% Canadian. Born and raised in Halifax, Nova Scotia.  I was around 14 years of age when first hearing about “multiculturalism.”

My first thought was “one day this will damage Canada in a major way.” This day has arrived. What we witness within these situations is the nadir of Canadian society. We are bottoming-out as a nation, by way of Pierre Trudeau-enforced globalism and multiculturalism.

Of course, when we say “we” it is in reference to Old Stock Canada-– Anglophones, Francophones, Christians, as well as First Nations. Justin Trudeau is trans-ferring these communities to lower class status in Canada.

In their stead–Somalia! How insane is this? Completely insane, say CAP. Therefore, patriots understand that Justin Trudeau and Gerald Butts are controlling Canadian society on behalf of their globalist string-pullers in the shadows.