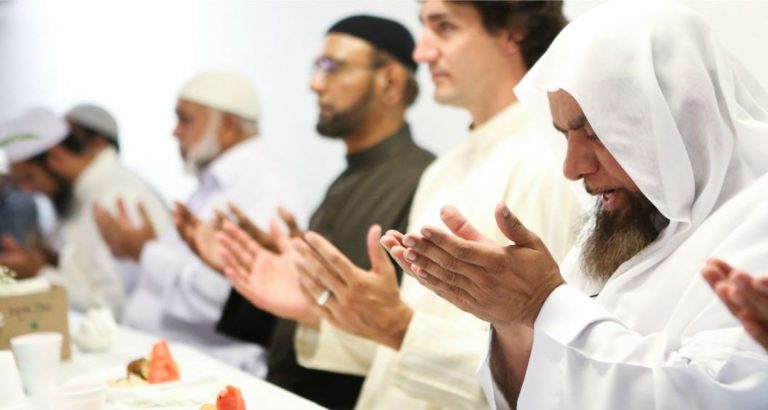 “Christians are afraid to express their views on social media for fear of repercussions at work or in their social circles,” said Janet Epp-Buckingham, who is also executive editor of the International Journal for Religious Freedom.

“Privatization of religion creates a problem because it severs important aspects of Christians’ faith from their lives, telling believers their faith is shameful and should be hidden.”

Talk about a contrast in the study of comparative religion. In Prime Minister Justin Trudeau’s Canada, Christianity is shameful, while Sikhism and Islam remain righteous and holy.

PM Trudeau, a self-confessed Catholic, is selective about which religions “make the grade” in Canada, and those that do not. Number one on his anti-organized religion ticket is the Christian faith.

Subsequent to the torching of dozens of Canadian churches, our PM had the following to say:

The burning of Christian places of worship “is fully understandable given the shameful history we are all coming to recognize.”

Regarding Canada’s Islamic communities, Trudeau made the following statement in his keynote speech at the Reviving the Islamic Spirit  in Toronto:

“Canadian Prime Minister Justin Trudeau commended the Muslim community for its contributions to Canada and reiterated his commitment to combat Islamophobia and politics of hate and division.”

A one-sided love affair it is. For what reason would a Canadian prime minister take such a divisive stance on religious life in our country? It is well known that the Trudeau government has issued punitive measures toward Canada’s Christian community:

— Arrests and jail time for Christian pastors during the Covid debacle.

— Police crackdowns and removal of worshippers at Christian houses of worship.

In an interview with CTV, PM Trudeau argued that former ISIS terrorists could help with de-radicalizing Muslim youths in Canada:

“There’s a range of experiences when people come home. We know that actually someone who has engaged and turned away from that hateful ideology[ISIS terrorism] can be an extraordinarily powerful voice for preventing radicalization in future generations.”

Away from the media spotlight, we meet the real Justin Trudeau. We stand witness as our prime minister rationalizes the presence of Islamic terror on Canadian soil. To be followed by ignoring rapidly building prejudice toward Canada’s Christian community:

“Hate attacks against Canadian Catholics escalated far faster last year than toward any other religious or racial group. But politicians have been strangely silent.” says Douglas Todd from the Vancouver Sun.

CAP pick up on a media ploy. Each time these sentiments are expressed, writers refer to the “strangely silent” aspect of the equation.

There is nothing strange about it. Christianity represents “traditional” Canada. Justin Trudeau maintains an animus toward Canadian heritage. Sikhism and Islam, our nation’s fastest-growing religions, represent the future– not to mention future votes for the federal Liberals.

Being something of a political prostitute, Mr. Trudeau throws away moral implications. In their stead arrives demographic manipulation as adopted from the PM’s preferred nation of China. Speaking of the behemoth nation, China is also vehemently anti-Christian.

“It keeps people from being full participants in the Canadian community” because Christians “cannot be part of public discourse on important issues of the day. We have a society that says that it values diversity and inclusion, so it should be including people of faith.”

Stop The Press: The Liberal Government of Canada “inclusive” social policies exclude Christians, Anglophones, in addition to Canadians of European origin. Legacy media– 90% of which are drawn from these communities– couldn’t give a damn. Why not?

“Last July, the Government of Canada held a National Summit on Islamophobia, where we committed to supporting anti‑racism programs that address Islamophobia and hate-fueled violence. We are moving forward with our intention to work with Muslim communities on the designation of a special representative to combat Islamophobia.”

Not a single word regarding persecution of Christians in Canada or around the world has come forth from our prime minister. Media sit in absolute silence.

North Korea tops the list of 50 countries ranked for the worst persecution of Christians in the world, according to the Christian watchdog organization Open Doors USA.

“A close second is Afghanistan, which jumped up one place since last year’s ranking. With the exception of North Korea, all the countries that cracked the top 10 are predominantly Muslim and most are in the Middle East and Africa.”

Not a word from Trudeau, or any member of his Liberal Cabinet.

How can this be? How is it that such explicit bias toward 3rd World religion can exist within the PMO, contrasted with world-wide neglect of Christian persecution?

The answer is surprisingly simple: because it can. Because this religious dynamic is institutional.

Well, the news is that the reverse of the proclamation is reality on the ground floor of Canadian society. Trudeau’s chosen faiths are sacrosanct in Canada. Flip the switch, and Christianity is available for trashing and bashing. So much so Christians are afraid to speak their minds regarding their personal faith.

This is in Canada- not China. Astute Canadian know the deal. Justin Trudeau and his cognitive limitations were selected to lead the “Woke Communist Revolution.” By the time his pseudo-socialist government is through with our society–if they ever are– Canada will be a fully-functioning “born-again” nation.

Christians, as well as Anglophones, will exit toward the basement of society’s social order. In their place will be Justin Trudeau chosen communities. With Canada’s colonial founding as justification, the transition will be justified as a righteous act.

“While it’s true police hate statistics are notoriously subject to variability depending on who chooses to file complaints, and that Black people and Jews reported a higher total number of incidents than Catholics, it is still news that anti-Catholic hate crimes increased 10 times faster than overall.”

“Statistics Canada offered no comment on why there was an eruption of attacks on Catholic buildings and people.”

No comment on the persecution of Christians from Statscan.Add to this Justin Trudeau, CBC, corporate media and  academic “experts” populating our Marxist-infused educational system.

“The instrumental use of religion as a wedge to ply apart Canadian society is dangerous.”

Than you can be certain that Justin Trudeau is indulging in the practice.