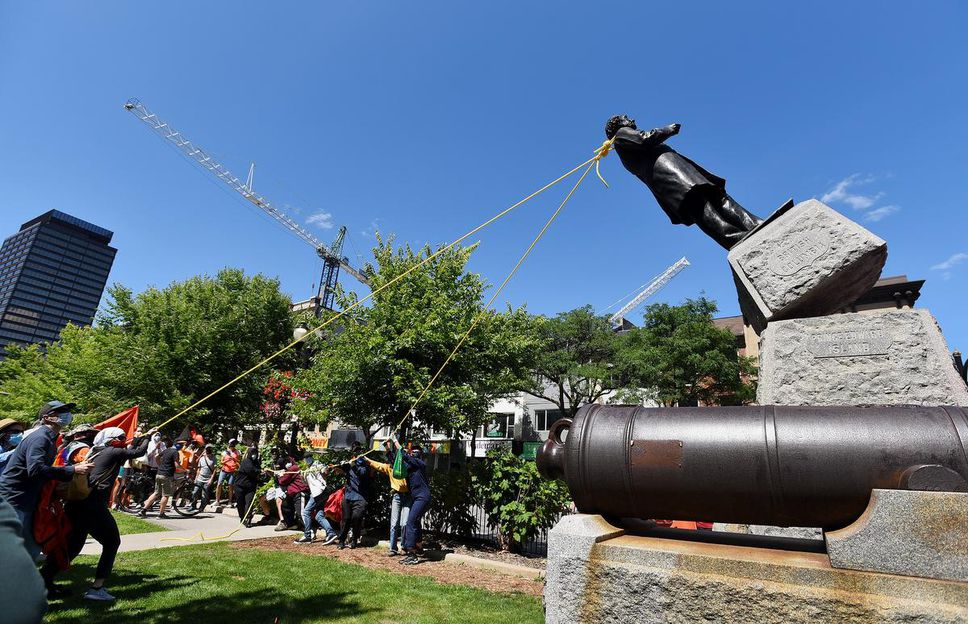 “Throughout Canada — on bloody battlefields, grand edifices and humble homes — sit thousands of small bronze plaques waiting patiently to tell their stories about Canada’s rich and complicated past. They have a lot to teach us.”

Yes, Canada’s list of over 2,000 national historic sites, events and people has a lot to teach us. It’s the reason the Trudeau government has implemented a program of “historical revisionism.”

Canada’s communist-inspired Liberal government are picky about lessons Canadians learn. Number one is the concept that our country is racist in origin, as well as in the present day.

“Now, however, rather than adding further to our history, it appears Ottawa may be planning to subtract from it,  says the National Post in a recent article.

“As a result of this process, Parks Canada recently posted a list of 208 historical individuals, places and events considered problematic enough to warrant further investigation — and possible cancellation. It contains some of the most iconic names from Canada’s past, including Sir John A. Macdonald.”

Let CAP readers understand what is being eluded in the process: historical revisionism–certain to run down Anglophone Canadian identity– is rooted in communist political philosophy.

“After it’s reviewed, a historic designation may be left unchanged, amended or revoked altogether. The latter option would mean the subject in question is stripped of its national historic significance.”

It’s really a shame that father of Chinese communism Mao Tse Tung is no longer with us. If he was, the political despot would absolutely thrilled with Justin Trudeau.

The term “historical revisionism” has been used in a number of contexts to refer to different revisions of Marxist political theory.

“In the late 19th century, the term revisionism was used to describe democratic socialist writers such as Eduard Bernstein, who sought to revise Karl Marx’s ideas about the transition to socialism, and claimed that a revolution through force was not necessary to achieve a socialist society.”

Justin Trudeau’s post-modern Canadian revolution is being achieved without force. Chalk one up for successful implementation of Marxist dogma. As obscured by media, Trudeau’s transition of Canada to socialism moves forward. To facilitate the objective, our Liberal government takes a page from Marx and Engels’ Communist Manifesto.

Upon which we move to Pierre, Justin and brother Alexandre’s preferred nation of China:

“The Chinese Communist Party (CCP) are firmly opposed to  research, discussions, or viewpoints that contradict its official version of history in a manner perceived to question or challenge the legitimacy of the CCP. Viewpoints deemed to be historical nihilism are subject to censorship and legal repercussions. The CCP opposes historical interpretations that are critical of it, the People’s Liberation Army, Socialism, and related topics.”

In other words, the Chinese government have the power to control historical perception of their country. Justin Trudeau wants this too, and he is about to have his wishes fulfilled.

“While this might sound reassuring to those who appreciate unvarnished historical truths, anyone paying attention to the treatment of Canadian history in recent years cannot help but conclude that we already live in a time of extraordinary circumstances.”

You can say that again, National Post. Canada’s “extraordinary circumstances” include political transition to a socialist nation-state. Not a problem, say the Globe & Mail– we have NHL Hockey scores to report on.

“The current outbreak of historical revisionism can be traced in part to the rise of presentism in elite and academic circles. Presentism refers to interpretations of the past dominated by contemporary attitudes and assumptions, without regard for context or attenuating historical perspectives. It has become a malign influence.”

Then Canadians can be certain Justin Trudeau and the Liberals are off and running in this direction. Why won’t the miscreant come out of the closet and say it:

“I, Justin Trudeau, am hereby transfering Canada into a communist state.”

Get it off your chest, bright boy– honesty is the best policy. It won’t happen. Instead, 38 million citizens will be fooled into accepting Canada’s political transformation. When it’s too late to reverse the process, Canadians will come to understand how Team Trudeau deceived our citizenship.

“William Osler is a member of the Canadian Medical Hall of Fame. His book, “The Principles and Practice of Medicine,” was once an essential reference for doctors around the world. Osler said many damning things about race. In 1914, he spoke of the need to create a ‘white man’s country.’ Like others of his time, he held views that are considered inexcusable today.”

For Justin Trudeau and Liberal Cabinet, it’s the content of their deepest dreams. Their plot is basic: take historical prejudice from another era, and use it to trash contemporary society.  It is the exact modus operandi of PM Trudeau:

Now, let us quote from a brilliant man– as opposed to a woke puppet:

Justin Trudeau or Mark Twain— whom shall be considered the wiser?  What Twain espouses is antithetical to Woke Liberalism. Perhaps he too will be scrubbed from the curricula within Canada’a public school system.

“For individuals, this doesn’t mean we need to agree with everything they ever said or did. Where they diverge from modern standards — or even from the standards of their day — it is appropriate to point that out. But that should not deny their other monumental achievements.”

Comrade Trudeau is ready to deny all of it. A transformative agenda of historical revisionism is being implemented in Canada as we speak.

“If we are standing on their shoulders today, at the very least we owe them a plaque on which to rest their feet,” concludes the National Post.

Not a chance. Trudeau has taken our country too far down the path of political transformation for such luck.

During the Cultural Revolution in China, comprehensive damage was done to both the Chinese people and China’s traditional culture:

“Temples were looted. Relics, temples, scrolls, and books containing vast amounts of cultural heritage were burned and destroyed under the red gaze of the Cultural Revolution.”

Is it hyperbole to claim a similar fate awaits historical identity in Canada? Though mainstream media are being paid not to speak of it, the Liberals are using communist tactics to re-imagine our nation as a post-modern socialist state.

Justin Trudeau is a communist, and he wants Canada to be communist too.