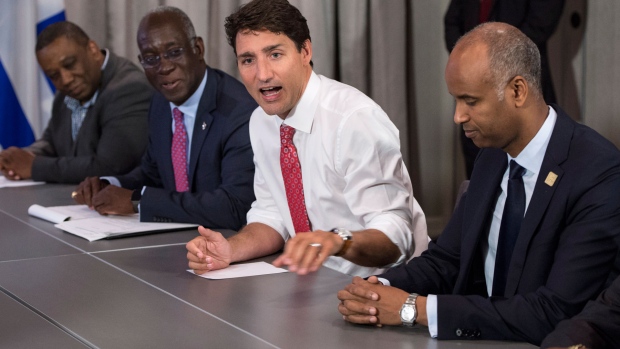 Queried on his political future, Justin Trudeau has been recently quoted by the Toronto Star as saying he will be “sticking around.” Meaning chances are strong that Trudeau will be running for prime minister in the next Canadian federal election.

It is without surprise that Torstar neglect to mention at least one pertinent fact: no candidate for prime minister has ever won four consecutive terms as national leader. The fact that such a scenario is unprecedented should come as no surprise.

Everything about Mr. Trudeau is unprecedented. Nothing more so than his attempt to transition Canada away from the free and democratic status it maintained for the past 100 years.

By now, any informed Canadian knows the deal on our aberration of a prime minister:

Non-Canadians come first. Old Stock Canadians are racists. Our society was founded on hate, and maintains the status to this day. Canada’s colonial heritage means that Trudeau and the Liberals have a right to do whatever they chose with society.

What they will do, and have been doing since Trudeau took office, is ominous as heck. As a post-modern division of government, media has hidden away the neo-totalitarian nature of our ruling government.

In fact, media obfuscation is such that millions of Canadians fail to see the woke writing on the wall. By the time Justin Trudeau is through with our country, it shall be functioning as a neo-communist state.

That is– if Trudeau is ever through with Canada. Or his Liberal Party. CAP wonder what defines a dictatorship. Is it replication of governance in China, Cuba, and other communist societies? Is recognition as a authoritarian state by the general public essential to the communist label pinned upon a country?

Or can a society be considered non-democratic even when a citizenship does not recognize its status? If this be the case, then Justin Trudeau’s Canada fits the bill.

CAP believe Canada will soon find out. Four terms in a row for neo-dictator Trudeau should tell us the story. Too bad it won’t. Let us anticipate media reaction upon a fourth-term victory for the Liberal Party. It will mark term number eight of a Trudeau-family member seizing neo-communist control of Canada.

“Pierre Trudeau was born and raised in Montreal, Quebec; he rose to prominence as a lawyer, intellectual, and activist in Quebec politics. Although he aligned himself with the socially democratic New Democratic Party, he felt that they could not achieve power, and instead joined the Liberal Party.”

“From the late 1960s until the mid-1980s, Trudeau’s personality dominated the political scene to an extent never before seen in Canadian political life.”

Translation: Trudeau Sr. was an elitist who personally shaped the destiny of society. Although blood relations between Pierre and Justin are tenuous, Trudeau Jr. has emulated–and surpassed– presumed father’s conception of what is best for Canada.

For the Trudeau family, what is best for our country is a secondary notion. First comes what is best for them on a personal basis,  followed quickly by a mad desire to entrench socialist governance in a democratic society.

Fair to say that between the two, Canada has mutated from an authentic democracy to a pseudo-authoritarian state.

That is, unless the Liberals lose to the Conservatives. CAP want to be careful here; in no manner does a CPC victory guarantee return to authentic democracy. Our pessimistic nature suggests that even if the Cons take over for a spell, our country will return to its neo-communist trajectory upon a return to a Liberal government. For CAP, Trudeau-brand Liberalism is communism in sheep’s clothing.

Still, a break in Trudeau’s commie conversion agenda would be a welcome sign for common sense Canadians. Justin Trudeau wants nothing to do with such a fate. He wants his four-straight terms, more than likely to seal the deal on Canada’s conversion to a neo-dictatorship.

Media say nothing. Not a word emanates from Liberal-funded mainstream media. Even if they bothered to address such concerns, the verdict is already in: everything we say is “conspiratorial thinking.” CAP say that today’s conspiracy theories–not all, but some– are tomorrow’s political reality.

Before the Liberals censor our kind on the internet, let us state it in no-uncertain terms: Justin Trudeau is in no manner a national leader in the tradition of past Canadian prime ministers.

Our current PM has both the arrogance and audacity to transition Canada into a condition not a single citizen asked for. Not that our condition is devoid of fulfillment of agenda advanced by someone somewhere in the world.

A glance at the policies of the World Economic Forum outline exactly where Justin Trudeau is taking our country. Climate change, Carbon Tax, LGBT, Gender, Transgender–you name the WEF Global initiative, and our Liberal government are all over it like flies on sherbet.

Can Trudeau win a fourth term? Absolutely he can, and likely will. It’s what occurs when playing with a loaded globalist deck. An upcoming election pits the parties against each other in pure woke style:

The Conservative Party versus:

With this cast of globalist characters backing him, how can our PM fail to win an eighth victory for the Trudeau family. We witness Canada’s destiny unfolding. Fair to say Canada would be a more free and democratic nation if the Trudeau family of Quebec never gained control of the political destiny of Canada?