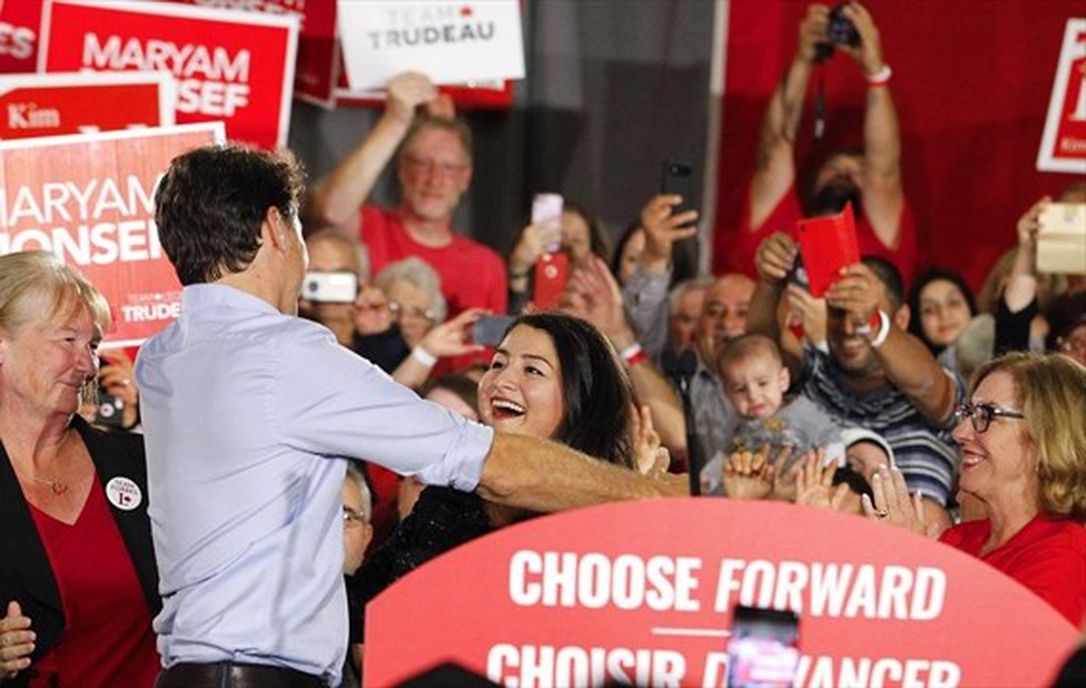 Prime Minister Justin Trudeau has weighed in on a controversial statement made by Liberal Minister For Women and Gender Equality, MP Maryam Monsef.

Ms. Monsef has been called to task by political commentators regarding her statement “I want to take this opportunity to speak to our brothers, the Taliban.”

Commenting on the situation, Trudeau delivered the following message, saying that MP Monsef had “expressed her views.” End of statement regarding his MP.

Cultural Action Party has a statement of our own: Justin Trudeau’s tacit endorsement of her words says more about the state of federal politics than  Maryam Monsef’s comment. It turns out that our prime minister has no axe to grind regarding his MP’s solidarity with the Taliban— an organization found on Canada’s official list of terrorist groups.

And to think pundits were saying this would be a dull election. In contrast, CAP find it fascinating. “Go ahead and associate yourself with the Taliban–see if I care” does not qualify as banality in our books.

Perhaps Justin Trudeau really does know something no one else does– save his globalist handlers. Can it be that the Liberals cannot lose regardless of how surreal the circumstances become?

It certainly feels this way. Leading to another piece of fascination. Readers may have noticed how mainstream media did an about-face upon the drop of the writ.

To a patriot’s amazement, legacy media began to indulge in behaviour not seen in the six years Trudeau has ruled over Canada. They actually became impartial. A pulse of objectivity entered the political arena. Suddenly, even the CBC were calling out the folly of Trudeau.

But not regarding the Monsef-Taliban romance. In this case, media return to the Holly Go-Lightly method of media dissemination. For establishment media  it’s back to “casual day” for the Trudeau-Monsef political gaffe.

Last time CAP checked, the Taliban was the enemy. Yet, in many respects, a Canada with a Trudeau in charge has no enemies of this variety– only “brothers.”

Such as it was in 2015 when a freshly-minted PM made his first major political decision: to work on behalf of Syrians. Instantly, 35,000 refugees were slated for arrival.

To be followed by his “terrorists is just alright” edict to the nation. In 2019, Trudeau’s Liberals repealed a law that allowed for the citizenship of those convicted of terrorism offences to be revoked.

This was followed by giant increases in foreign aid funding to Afghanistan, Pakistan, Iraq, Syria, Lebanon, Jordan and two dozen other Middle Eastern and African countries.

By the time PM Trudeau got through with Afghani import MP Maryam Monsef, she had been appointed to not one– but four positions as a federal minister.

CAP Conclusion: Justin Trudeau really, really likes Maryam Monsef. So much so he is on board with her cozying up to the terrorist Taliban organization. None of which will cause more than a momentary blip for the Liberals. And to think what it would mean for society to understand our Liberal government’s true relationship with the Middle Eastern theocracies and authoritarian governments.