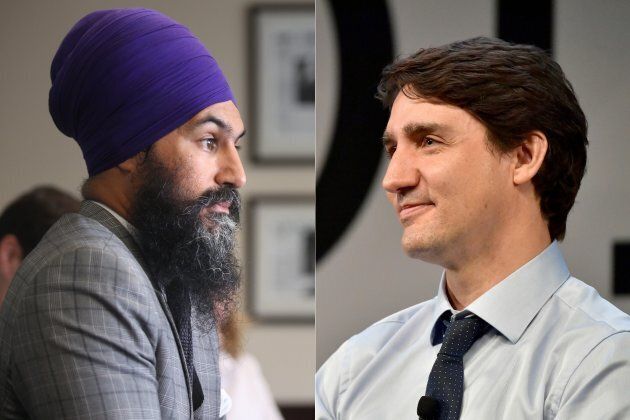 “The Liberal government has not done the job of making sure platforms are following the rules around making sure hate and misinformation are not being spread.”

No surprise that Cultural Action Party of Canada has a different take on the issue. PM Justin Trudeau and the Liberals have done a wonderful job of promoting hate and misinformation– against Old Stock Canadians.

For nearly eight years, PM Trudeau has been assaulting the dignity of Canada’s Anglo-European communities. Anglophones, Western Canadians, Christians, farmers, truckers, oil workers, and the rest of “grass roots” Canada. If a citizen is not “racialized,” homosexual, transsexual or a permutation in-between, Trudeau has no use for them. Except for their tax-dollars, of course.

New Democratic Party leader Jagmeet Singh is just as spiteful as boss-man Trudeau. Somehow, this powerless political figure has found himself in a unique position.

Powerless– yet powerful at the same time. Over the course of five years as NDP leader, Mr. Singh has empowered his party to zero extent. When he began, the New Democrats held 46 seats in Parliament. Today, they hold 25 seats.

Let CAP do what mainstream media never will. Namely, to juxtapose NDP party degeneration with the fact that in many ways, Jagmeet Singh holds the key to Justin Trudeau’s Woke Liberal kingdom.

Seems a common thread exists between these two men. Both have unending contempt for Canadian society, and our Anglophone-British heritage communities in particular:

“What has happened to Indigenous people in Canada is genocide, no question about it. There were clearly systems in place designed to kill them.“  The genocide was against Indigenous people. And it is a genocide that is ongoing.”

Never mind that in 2022, Indigenous Canadians are among the fastest-growing identifiable communities in Canada. As opposed to demographic free-fall that Anglophone communities are experiencing at present.

Only to unravel a further commonality: Trudeau and Singh are pushing to erode freedom of expression in Canada:

“The government has a responsibility to play in making sure social media platforms are adhering to proper guidelines around misinformation, around hate, and why we have been saying for a long time the responsibility to keep people safe from misinformation and radicalization cannot rest in the hands of private companies,” said Singh.

“It has to be the government taking responsibility.”

Proponents of freedom of speech beware: Jagmeet Singh wants to transition expression of opinion to full government control. The structure is what is found in communist China, via their government’s Great Internet Firewall.

CAP pull no punches: it is possible that Jagmeet Singh is a greater threat to freedom and democracy in Canada than ersatz bossman, Justin Trudeau. Together, the dynamic duo of neo-communists have 38 million Canadians by the short-hairs.

In September, 2022,  PM Trudeau said he is “committed to regulating the internet.”

“The government believes in free speech,” said Trudeau. “But with social media there is a new way to foment anger and hate that is different from anything we have seen before, difficult to counter, and it is destabilizing our democracy.”

In CAP-land, this statement is known as a bald-faced lie. In more sophisticated terms, it’s an example of “Doublespeak,” defined as language that deliberately obscures, disguises, or reverses the meaning of words.

It’s a technique that Trudeau has lifted from the communist dictators he so admires– Mao Tse Tung and Fidel Castro in particular.

In no manner is the internet destabilizing our democracy. This tactic falls squarely on the shoulders of the authoritarian tag-team of Justin Trudeau and Jagmeet Singh.

Together or apart, these two are Canada’s greatest threat to democracy. So much so that, in CAP’s opinion, the Liberal-NDP quasi-communist pact signed earlier in the year is sowing the seeds for the downfall of democratic governance in Canada.

“We are living in a very difficult time right now. The problem arises when disagreements are built on falsehoods or wrong facts because then it becomes difficult to have a real debate and genuine exchange of ideas.”

And who shall decide what constitutes falsehoods and wrongful facts? Trudeau and Singh are pushing for the Liberals to play judge and jury for what can be dissemminated on the internet in Canada.

China, Cuba, Soviet Union, Nazi Germany. In all cases, freedom of speech fell under absolute control of government. With commonality in the form of authoritarian governance, Canadians would do well to recognize that Justin Trudeau and Jagmeet Singh want the very same for our country.

— With files from Western Standard News.

5 thoughts on “Trudeau, Singh Push For Full Government Control Of The Internet”