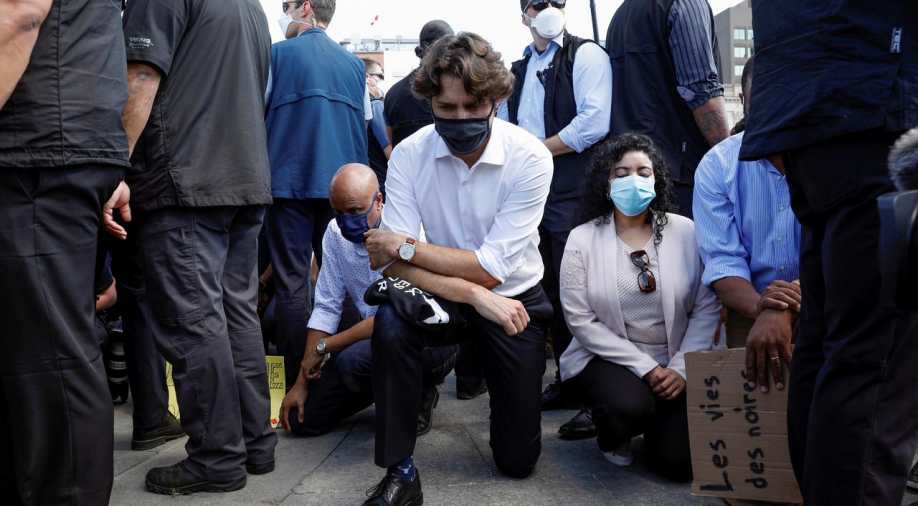 To effectively fight a war, a nation must establish an army to lead themselves toward victory. Historically, this has taken on the form of utilizing guns, tanks and other “traditional forms” of weaponry to fight the battle.

Within contemporary society, these instruments of war take on a much more insidious format. To fight Prime Minister Justin Trudeau’s post-modern war, post-modern techniques have been successfully deployed.

One less-than-obvious methodology resides in an establishment of a virtual team of Canada-hating media warriors. Specific “character traits”  bring together this motley crew of Canada-bashers:

They are 3rd World females in the main. Each is assigned to one of Canada’s major media outlets. Sheema Khan from the Globe & Mail, Shanifa Nasser from CBC, Shree Paradkar of the Toronto Star, and Vanla Subramaniam of the National Post.

What else do these  writers have in common? Try a hatred of Canadian society. Add to this an animus toward Anglophone and European Canadians. For good measure, throw in a desire to disempower our communities, and trans-fer this power to their own communities.

Salient Question Time: Why would the Globe & Mail--ostensibly owned and controlled by traditional Canadian entities— establish a cabal of Canada-hating 3rd world journalists to attack the very foundation of Canadian society?

“Propagating the notion that Canada is no longer racist is dangerous and damaging because it only serves to reassure white people and white-dominated systems in this country that their work is done.”

So says this Subramaniam lady. How sweet it is to know what within Justin Trudeau’s program to eradicate racism in Canada, our society maintains an ability to attack one identifiable community as virulent racists, bigots and xenophobes:

White Canada. This is the reality within Justin Trudeau’s personally-branded “no core identity” nation.

Please do tell, fellow patriots: How does this align with Justin Trudeau’s ubiquitous dedication to the eradication of racism in Canada?

Quick Answer: It doesn’t. Rather, what is really occurring is an establishment of racist stereotyping targeting Canadians of European Origin.

CBC are good with it. CTV agree. So do the Liberal Party of Canada and their 3rd World Globalist agenda of national transformation.

Check out this “gem” from perhaps the most extreme white Canadian-basher in the business– Toronto Star’s Shree Paradkar:

Sweet, sweet Shree Paradkar is enjoying her licence to throw white Canada in a garbage can. Imagine a case of “reverse-racism,” where an Anglophone writer expresses something along these lines:

Fact is, this messaging would be immediately rejected by media editors in Canada. Truly, our nation has undergone a complete social overhaul. The Canada of 2020 is an anti-European Canadian country.

CAP expect this to get much more extreme in the coming years. Our crystal ball informs us that the decade of 2020-2030 is now designated the decade white Canada transition to our nation’s new oppressed peoples.

Justin Trudeau desperately desires this. African supremacist MP Ahmed Hussen must be absolutely “over-the-moon” about this. Hussen and other Anglo-hating political figures can now taste victory, and will gun for this like mad to complete the task by the year 2030.

Post-modern warfare has come to Canada. No guns, tanks, or bombs. Not a single element of traditional warfare exists in this program. Rather, the battle is being fought “from within.”

After five years of the bashing of Anglophone Canada from Justin Trudeau, the weaponry has been established:

Politically: The Liberal-Globalist Party of Canada has full control of society. Democracy is but an illusory concept within this dynamic.

Economically: Justin Trudeau continues to “sell” Canada to Communist China, geo-political Islam and the United Nations. The highest federal deficits in history attest to this phenomenon.

Socially: On behalf of his globalist backers, Trudeau has established Anglo/European Canadians as our nations demonized racist community.

Religiously: The ruling government of Canada have established Islam as our most powerful religious community, while simultaneously driving Christianity into the dirt.

Media: CBC, Globe & Mail and the rest all have anti-white journalists in place to drive home the globalist agenda.

This, fellow patriots, is the real and true Canada of Justin Trudeau. What CBC and the rest emote is nothing but liberal-globalist propaganda. The motive for these publications no longer has anything to do with objective news reporting, but rather exists as an emulation of China-style communist media propaganda institutions.

What a sad situation for Canadians of European heritage. CAP think these communities are the true victims in all this. Note how this remains 100% antithetical to the “general messaging” of Trudeau, the Liberals, and their media partners.

As a successful fascist in Europe once stated, and we paraphrase:

“Accuse your enemy of the very behaviour you yourself indulge in.”

BINGO–there’s the ticket, brother and sister patriots. While all major Canadians institutions brand our community racist, a program of reverse-racism is being incrementally perpetrated upon European-Canadians.