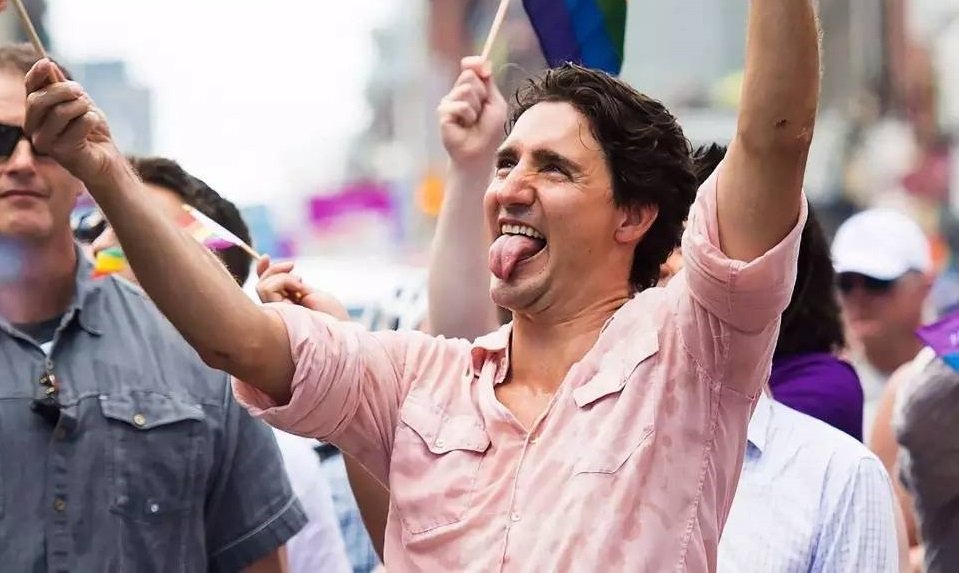 This Trudeau person is one strange fellow. Where he should act, he remains silent, and when he should remain silent, he speaks. Mind you, when he does speak, it is often on a topic unrelated to the issue at hand.

Take the “Buy America” initiative. During the NATFA negotiations with the USA, Buy America loomed LARGE. This is by no means a benign affair.

Why isn’t Trudeau speaking out against Trump’s job killing moves that will undoubtedly damage actual Canadians and cost jobs? The latest executive order from the president increases the overall requirement that infrastructure projects be made up of American made goods from 50% to 75%. That requirement actually jumps to 95 PERCENT for any steel or iron used in a project.   “We’re STANDING UP for the American worker like our country has never stood up for the worker before,” Trump said, as he signed the order.

90% of infrastructure projects in the USA utilizing steel or iron MUST use American-made products. What a MAJOR BLOW to the steel manufacturing industry in Canada. What does Trudeau have to say about Trump’s America in this regard?

“That’s not the way we do things in Canada.” Not regarding industry, but regarding Trump’s comments on Democratic Senator Ilhan Omar, and three other American Senators. Trudeau was responding to the Donald’s thrashing of these ladies on Twitter.

Justin Trudeau- ever the ideologue. Pourquoi? Because he has NO expertise in the fundamentals of his job. A thorough understanding of Canadian governance, law, jurisprudence, history and political science would come in handy. Justin has NONE OF THIS. Instead, he has turned to the feeble world of virtue-signalling on behalf of THE PEOPLE.

Yes– Muslim people, Sikh people, Gays, Transgender, Africans and the Aga Khan. Trudeau has taken BILLIONS of our tax-dollars, and handed them to Somalia, Syria, Iraq, Afghanistan and Iran. Afghanistan ALONE has received $400 MILLION from the Trudeau government.

Benefit to the people of Canada: NOTHING. Turning to America, PM Trudeau is wholly ineffective at protecting Canadian industry, and its working population. There is little doubt that “Buy America” will DAMAGE the Canadian economy.

Conclusion? PM Justin has done a GREAT JOB assisting the Third World, Islamic countries, despotic foreign governments and the Sikh separatist movement. As for Canadians, he has created the biggest federal deficit in Canadian history. Part of the deficit comes from the BILLIONS given away to African and Islamic nations.

What a TRAP! But in reality, this is part of Mr. Trudeau’s actual job description. Last week, when more than 600 jobs were lost at Bombardier rail plants in Ontario and Quebec due to protectionist measures, the only jobs Trudeau and his crew were standing up for were THEIR OWN.

Rather than picking up the phone and calling Trump, Trudeau’s team issued a news release BLAMING those job losses on a lack of transit investment by Ontario Premier Doug Ford.

All this brings up a most telling question: Does Justin do all this ON PURPOSE? What is it this man REALLY WANTS for the future of Canada?  Due to the murky, sketchy world of Trudeau governance it is actually difficult to tell. Therefore, CAP offers conjecture:

Justin Trudeau’s role is not to carry on with political and social condition of our nation. Rather, his goal is a complete “re-imagining” of Canadian society. For this purpose, he placed a Somalian Muslim in charge of the demographic destiny of our nation.

By way of Trudeau and MP Ahmed Hussen, Canada is to TRANS-ition to a post-modern nation state. Democracy is to be eroded, and eventually replaced with socialism. The Christian faith is to be disempowered, with Islam taking its place as Canada’s dominant religion.

Old Stock Canada, Anglophones and other traditional communities are to transition to a maligned minority branded with the racist label in reaction to our historical treatment of Aboriginals in Canada. Over time, Parliament becomes dominated by Third World MP’s. These people succeed because government has PACKED Third World immigrants into the “905” region of the GTA. This is a component of a plan to LOCK IN Trudeau as Canada’s ersatz dictator FOR LIFE.

That’s the agenda. What goes on OUTSIDE of this dynamic is secondary. This means the Canadian economy is secondary. In fact, it may well be that King Justin actually WANTS our economy to tank–thereby facilitating and accelerating his covert, nefarious plan.

So Justin sits back as Donald Trump SLAMS Canadian industry. Another opinion: part of the reason Trump behaves in this manner is that in truth he DESPISES Trudeau— just as the governments of India, China, Saudi and Philipinnes do.

Can all this be rectified? Can the people of Canada PURGE THEMSELVES of the Trudeau family once and for all? Yes–we can, and there is a good chance we will. The first thing which must be done in this regard is to NOT LISTEN to a word establishment media have to say about their globalist financier. Regarding boss-man Trudeau, these media people are not to be trusted in any way, shape or form.

On October, 21st, 2019, Canadians can RID OUR COUNTRY of the menace Trudeau. Get him out, and let NO MEMBER of the Trudeau clan get their hooks into Canadian society EVER AGAIN.