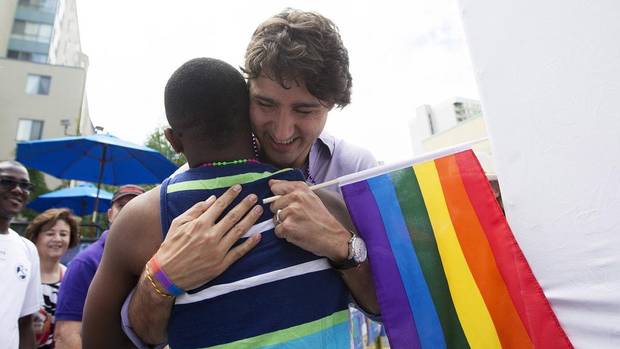 Tourism minister Mélanie Joly and finance minister Bill Morneau announced the funding in Toronto when unveiling a Liberal tourism strategy that puts “investments in LGBTQ2 tourism” as a top priority.

The Liberals have designated promoting homosexual and transgender events as one of the five “pillars” of the CEF. They gave $100,000 to Fierté Canada Pride to help LGBTQ groups across Canada access the CEF to pay for local Pride events, according to ministry spokesperson Jeremy Ghio. The Liberal move will benefit ALL Canadians, Fierté Canada Pride tweeted.

How so? Please explain how promoting transgenderism for 8-year old children benefits ALL Canadians. Does it benefit parents who do not encourage sex change operations for their children? Does it help adult transexuals at greater risk for heart attack than non-transgender Canadians? A complete farce.

“Pride celebrations bring tons of business and tourism to Canada, but more importantly they’re a significant part of the ongoing path to full equality for LGBTQ2 Canadians,” said Minister of Finance, Bill Morneau.

“This funding will help LGBTQ2 Canadians continue to share their history and story with the rest of the country and the world.”

LGBT people have full and equal rights under the Canadian constitution:

Naturally, this is NOT GOOD ENOUGH. For special interest lobbies in Canada, nothing ever is. “It’s a start” they opine. “There is much more work to be done” say the social justice warrior brigade. But NEVER to they give thanks for assistance in bending the will of the majority toward their way of thinking. Never do they state a program HAS BEEN A SUCCESS. It is always “not good enough and MUST have this or that in addition.” Clearly, this movement INSATIABLE

Now, government will further fray the nerves of conservatives and Christian Canadians with their “gay tourist” initiative.  Notice the high-level strangeness of how the Trudeau government operate. Trudeau’s approach to LGBT and the Nation Of Islam are nearly identical. Unquestioning, perpetual support with NO QUESTIONS asked and no demands made.

Why would this be the case? LGBT and Islam are like chalk and cheese–they have nothing in common. Yet, for Justin Trudeau they are the apple of government’s eye. Very strange.

LGBT, Transgenderism, Pride, Gay Tourism— all government-backed, all indemnified from criticism by governmental political correctness. Don’t like a leather-chapped half-naked man on a parade float while you walk down the street with your 6-year old child?

Too bad for you pal–Justin Trudeau is now in control of your society. Leather-clad gays, Pink-haired transvestites and Muslim women with head-coverings is where it is at for the prime minister of Canada. What an odd duck this guy is