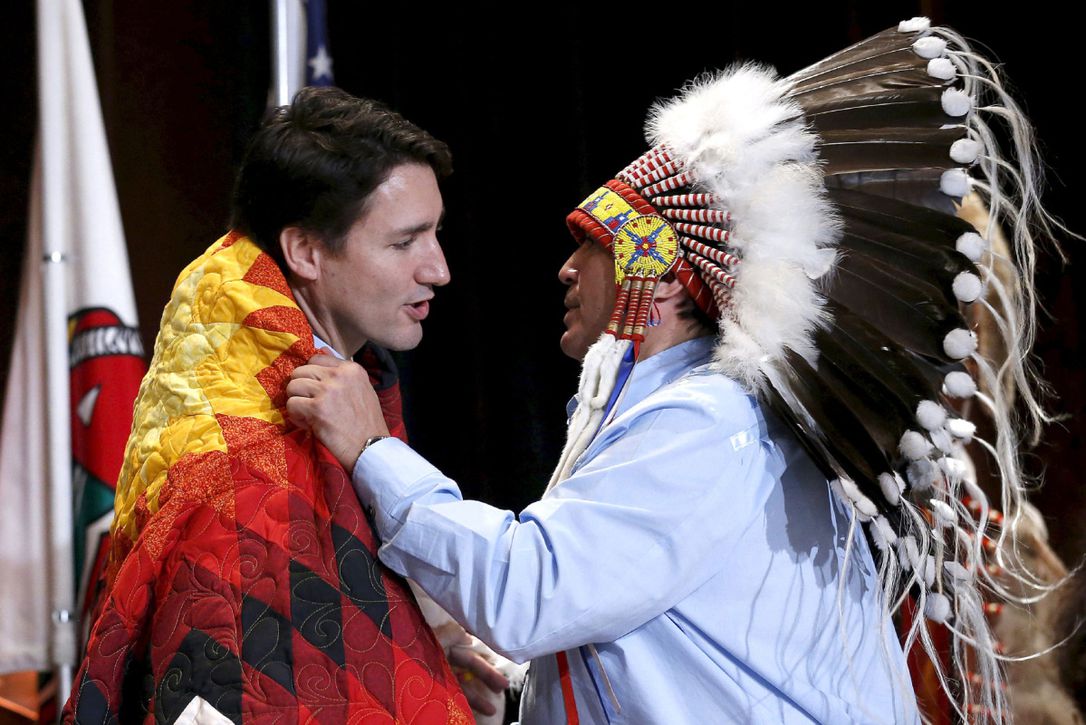 One of the most significant promises to the North the Trudeau government has made since gaining power in 2015: to eliminate 50 per cent of tuberculosis cases from Inuit Nunangat by 2025 and to eliminate the disease entirely by 2030.

This bold pledge already smells like a broken promise. According to a  Nunavet News Organization, the TB elimination campaign has lost its most credible and competent federal government champion: Jane Philpott, the Indigenous services minister who originally made that promise.

Since then, a cone of silence has descended on the Arctic tuberculosis issue. Even during the election campaign, it received little attention. And as of now, work on TB elimination appears to have ground to a halt.

Enter Justin Trudeau–not. Let’s take a quick look at what our post-modern PM has done to improve health in Middle Eastern and African nations:

The Trudeau government pledged just over $930 million to the largest financier in the fight against AIDS, malaria and tuberculosis[in Africa].

The money represents a 15.7 per cent increase from the $804 million provided by the Liberals to the fund during its previous replenishment cycle in 2016.

“We know that most vulnerable groups, including women, adolescent girls and children, are particularly affected by AIDS, tuberculosis and malaria as a result of poverty and gender inequality. This is why Canada is stepping up the fight against these diseases,” said Canadian Minister Of Status Of Women, MP Maryam Monsef.

Okay, so let’s get this straight. Justin Trudeau-appointed MP Maryam Monsef hands Third World nations in the Middle East and Africa just under one billion dollars to fight tuberculosis in these nations, while entirely IGNORING this health issue upon Canadian soil.

How Justin Trudeau is this? Why, only 100%. Therefore, by default, this sad inversion of government priorities is also one hundred percent establishment media in Canada. None of them–CBC, CTV, Globe & Mail and the rest–has breathed a single word regarding this typical Trudeau behaviour.

First Nations, Canadian-born children, Anglophones, Christians– to the bottom rung of the Canadian “totem pole” with you. See how they roll in reality?

Of course, within Trudeau’s “no identity” Canada– the entire sordid affair is buried by media. Conversely, for any incident of so-called “Islamophobia” in Canada which rears its head–including minor infractions such as insulting a hijab-clad Muslima, all hell breaks loose as mainstream media drag whitey through the mud for being racists and bigots.

This, fellow patriots, is your Canada. What Toronto Star deliver in terms of social issues related to issues of prejudice and oppression in Canada is biased , skewed, and twisted into Anglophone- bashing acts of racism. Now that Liberal government “own” media in communist fashion, this is the present-day structure of government/media assault upon our people.

In 2018, following a major outbreak in which scores of people developed active TB and a 14-year-old boy died of the disease at a hospital in St. John’s.

Yet no community-wide screenings appear to have been done in Nunavik since early 2018, when Philpott made her announcement.

Tuberculosis is a disease of poverty. That’s been pointed out so often, it’s become a cliché. But it’s true. Where people are poorly nourished and poorly housed, tuberculosis thrives.

“The Canadian Council of Muslim Women will receive $761,720 for “Strengthening Capacity to empower Muslim Women and Girls”, which will increase the organization’s ability to apply the gender and diversity lens.”

There you have it, fellow patriots–Justin Trudeau’s Canada for all to see. Well, not quite “all.” Yes, CAP writing receives tens of thousands of hits on a regular basis, but in reality, perhaps 5% of Canadians will become aware of the dynamic herein revealed–a giant financial tax-payer fund contribution to the Nation of Islam, while leaving First Nations Canadians to die from tuberculosis.

This is your Canada, fellow patriots. Every day since King Justin seized his globalist crown, the Liberal government have been pandering, indemnifying and empowering the Nation of Islam upon Canadian soil–as well as within government.

On the flip-side, Aboriginal Canadian communities continue to bathe in mercury-tainted poison water, as well as dying from TB, and other poverty-related illnesses.

Meanwhile, Justin Trudeau sends billions upon billions Canadian tax-dollars to Islamic, African and Third World Nations to improve the health and welfare of their citizenships. Media say nothing. CBC breathe not a word of this pathetic tale to the people of Canada.

CAP Conclusion: Trudeau, Morneau, McKenna do not work on behalf of Aboriginal or “Old Stock” Canada. They do work on behalf of the United Nations, Sikhism, Nation of Islam, Saudi Arabia, China, as well as homosexuals and the transgendered.

Taljk about the “Great Canadian Hoodwinking”-– an agenda which would never result in success without establishment media slaves going along for the ride.