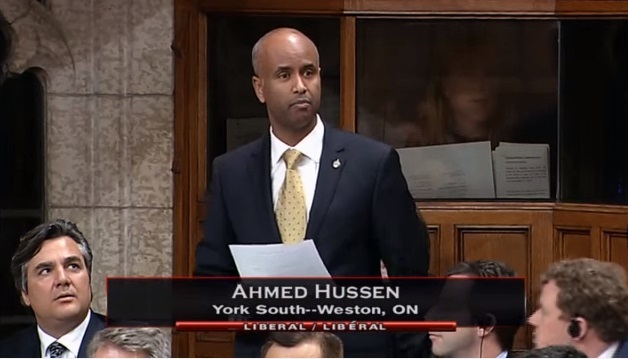 “Anti-Black racism continues to be one of the most common forms of hate found in hate-motivated spaces, resulting from our systemically white supremacist, colonialist and imperialist history.”

As published by  Blacklock’s Reporter, PM Justin Trudeau, Minister of Multiculturalism MP Ahmed Hussen, and the Liberal Cabinet have funded a polemic against Anglo-European Canadians. Heading up the project is the Canadian Anti-Hate Network.

Ostensibly, the goal is to raise awareness of how white supremacist organizations operate within our society. A review of the documentation suggests a diatribe of race-oriented hypocrisy, or what is referred to as “reverse-racism.”

“To be clear, the pro-white or pro-European group or event the student seeks to establish is a tool of hate-promoting groups. Pushing students to argue in favour of teaching a white history month remains elemental to their efforts to deceptively empower young recruits.”

“Students are convinced that they are the marginalized group, and as a result, they should demand rights and recognition.”

So, according to the Anti-Hate Network, rights and recognition should not exist for European-Canadians. One has to wonder if an expiry date is associated with their proclamation. In due time, Anglo-Europeans are set to become a minority community. Will they remain the singular minority lacking rights accorded to racialized communities? Is this what the “equality promoters” would like to see in the long-term?

“Approaching teachers or administration to advocate for school events or groups promoting pan-European culture—a “white student union” or “European History Month,” among other examples. Pushback from peers can backfire, increasing tensions and seeming to justify requests for separate white entities and events.”

University of Toronto began organizing separate Black Grad celebrations in 2017 and over the years the events have been held at St. George and Mississauga campuses.

For the Liberal Cabinet, the double standard is business as usual. Did Martin Luther King and the civil rights movement in America not advocate for integration within the school system? Woke academics now choose to reverse the process. Media say nothing.

“Many schools have groups celebrating specific European heritage groups, but this is vastly different from a pan-European or white pride group.”

Anti-Hate Network wish to control citizen behaviour. Italian heritage is fine, Ukrainian cultural organizations is okay, but under no circumstances can two or more combine into a singular unit.

“Islamic Relief Canada affirms and advocates for the collective and inherent rights of First Nations, Métis, and Inuit peoples in Canada and the universal rights of Indigenous peoples around the world.”

As Canadians unencumbered by media propaganda, let us understand the dynamic. A migrant community with the briefest of histories on Canadian soil is free to unite with Aboriginal groups regarding social issues which took place one hundred years before the arrival of new immigrant communities. But never shall Poles and Germans unite in political action.

“There have been cases where college-level attempts were then used to lodge human and civil rights campaigns, alleging anti-white racism. Don’t play into that and become an unwitting actor in these ploys.”

Translation: there is no such thing as prejudice against white Canadians. Will the AHN change their tune when our communities transition to a minority? Unlikely it is.

At state-funded CBC, questionnaires must be filled out regarding data on “guest’s gender, ethnicity and whether they appear to be biracial/multiracial, as well as additional details of ethnic origin for persons of colour.”

To invert CBC policy is to discover that Anglo-Europeans are being refused employment based on skin colour. All is well according to the Multicult minions.

“The argument is often invoked when hate-promoting efforts are identified as hostile and discriminatory, sometimes going as far as equating “white pride” with Latinx pride or Pride Month in support of LGBTQ+ communities. This is a false equivalence.”

An entirely subjective conclusion, lacking fact, evidence or data. In other words, classic woke liberal “validation.” Let it be noted that so-called anti-racists have integrated anti-LGBT sentiment into their agenda to enhance political power.

“Claims of reverse racism fly in the face of data that demonstrate systemic advantages for white people in access to education, economic opportunity, the application of criminal justice and life expectancy. While members of any group may commit acts of bias against any other, these acts do not add up to systemic, historically-rooted racism.”

Let all Canadians– White, Black, Asian– recognize a simple fact: nothing can be done to alter our nation’s history. Holding this against us in perpetuity looks to be the order of the 21st century. There is no expiry date on leveraging of historical racism to denigrate Old Stock Canadians. It can go on forever.

In this regard, we note that Canada’s three pillars of social control– government, media and academia– never speak of the future of our country. There is good reason for this. Our future includes caucasians as a minority community:

Estimates suggest our demographic will be 51% racialized in less than half that time. Will the anti-Anglophone polemic cease to exist when this time arrives?

This should be among the most pertinent future-oriented queries in society. No surprise that it doesn’t even register on the media map. Now we know why our controlling institutions never speak of our future. Will there be a progressive epiphany moment when society recognize our transition to minority status? Will this be followed by a transference of minority rights to caucasians of our country?

It will never happen. From a sociological basis, such an outcome holds the key to the future of our country. Academia say nothing. Media refrain from speculation. Can a set-up exist for role-reversal in which our communities transition to second class status?

MP Ahmed Hussen and the Anti-Hate Network have deemed a Canadian flag a hate symbol. Not the current iteration, but rather the Red Ensign flag which symbolized our country from 1867-1965.

What gives them jurisdiction to do so? Try nothing at all. Just as it applies to the anti-European Canadians program now being forced upon our national student body. One can picture the expression on the faces of our children as they listen to a litany of Canadian-bashing as advanced by the Confronting and Preventing Hate In Canadian Schools  program.

The taste is bitter as children of Old Stock citizens learn how racist, bigoted and genocidal their country is. Pride dissipates as our youth are confronted with the stark reality of biased, hateful opinion.

“There is nothing good about your country,” little Evan MacKenzie. “You’re ancestors were  despicable people, and by association, so are you.”

Woke Liberalism fights hate with hate. In reality, it’s nothing less than a transition of targeted communities. It is not equality, but rather a burning vengeance, which lies at the core of the Canada’s woke revolution.