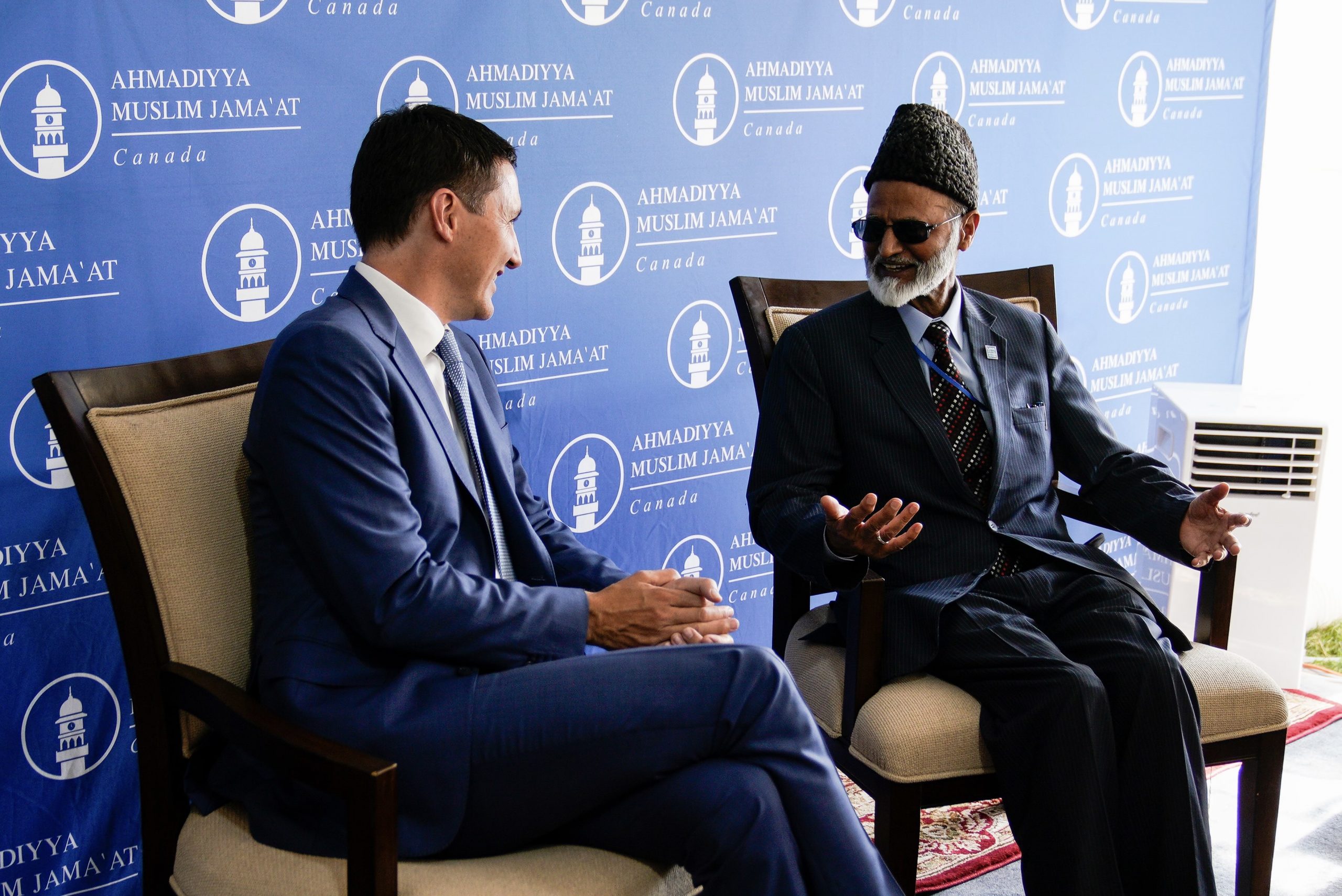 “The primary purpose of this convention is that every sincere member of Jama`at may derive religious benefits and at the same time acquire more knowledge and advance in God realization.”

According to Lal Khan Malik, President of the Ahmadiyya Muslim Jama’at, the Islamic organization purchased the property to use as the venue for their annual conference in Bradford, Ontario.The 44th Jalsa Salana Canada saw thousands from across the country and around the world arrive in Bradford for the three-day event (July 15-17).

They must be thrilled to bits this year, as none other than Prime Minister Justin Trudeau appeared as keynote speaker. Mr. Trudeau, the western world’s leading advocate for the Islamic faith, offered up his typical platitudes toward Canada’s Muslim community.

“An attack on Muslim Canadians is an attack on all Canadians. We have to continually step up and do more as a country.”

Never does our PM vary in rhetoric regarding the Nation of Islam. At the core of Trudeau’s messaging is an element of the insatiable. “We must do more, it’s not good enough, there’s more work to do.” One has to wonder if there can ever be enough done for Trudeau’s preferred class of 3rd World communities.

Trudeau’s look is severe as he delivers his address. Speaking to the Muslim community offers a rare instance when the PM abandons smugness to display what for him is an attempt at humility.

“To build a better society, a better world in which respect for each other is what drives us.”

“Intolerance and hatred undermined everything we have built is this country. We have to continually step up and do more.”

It’s hollow and vacuous, but may mean something to the exclusive crowd of Muslims from Canada and around the world. As far as the rest of us go, it’s typical Trudeau.

Why a Canadian prime minister elevates Muslim communities above all others remains a mystery. Whatever his motivation, there is obviously something very special about this community. Can it be that Justin Trudeau knows something about the future of Canada that the rest of us do not?

The veracity by which he supports Islamic doctrine should cause the rest of us to question his behaviour. It doesn’t– for a simple reason: Canadian media have not revealed the situation to the 96 per cent of citizens of our country who are non-Muslim.

CTV News is the only mainstream media outlet reporting on the convention. The rest passed.

A brief summary of the belief system of the Ahmadiyya Muslim Community:

“The Six articles of Islamic Faith and the Five Pillars Of Islam constitute the basis of Ahmadi belief and practice. Ahmadis accept the Quran as their holy text, face the Kaaba during prayer, follow the Sunnah (normative practice of Muhammad) and accept the authority of the Ahadith (sing. hadith; reported sayings of and narrations about Muhammad).”

Why is this so important to Justin Trudeau? The man was raised a Catholic. Not once in the six-plus years of his tenure has he made a formal, media-covered appearance at a Christian place of worship. Not once in this time period has media pointed this out.

In May 2022, Mr. Trudeau marked Eid al-Fitr by reflecting on the need to educate “all Canadians on what it means to be a Muslim in Canada.”

An article published by CBC News in 2011 offers up a piece of bewilderment:

“Liberal MP Justin Trudeau says he is upset and offended by a Conservative MP who publicly questioned his adherence  to the Catholic faith and his suitability to speak to students at a Catholic school.”

Dean Del Mastro, parliamentary secretary to the prime minister, commented that it’s outrageous the Catholic School Board in Peterborough, Ont. had invited Trudeau to speak for a second time in three years.”

“Are there any tenets of the Catholic faith that Justin supports?”

An excellent question regarding the beliefs and personal behaviours of Justin Trudeau. No wonder establishment media in Canada have ignored the issue for the past seven years.

In 2019, a legal group took the Liberal government to court over its denial of job grants for   Christian Bible camps in Ontario and Nova Scotia. The camp’s operators believe the rejection is based on their Christian religious beliefs.

In the same year, the Liberals granted the Islamic Society of North America-Canada $25,000 in Canada Summer Jobs funding. Despite having its charity status revoked by the Canada Revenue Agency for allegedly funding a militant terror group.

According to official records, seven chapters of the Muslim Association of Canada (MAC) were listed as approved for funding.

This is Justin Trudeau, and the country of Canada. It is also the state of legacy media, who refuse– or are banned from– exposing the priority our prime minister advances toward the Islamic faith. If this isn’t community privilege, what is?

Privilege in “no core identity” Canada in the eye of the beholder. This being government, media, academia, healthcare and all other controlling social institutions. These people tell us that white Canadians hold all social privilege, while “racialized” communities maintain exclusivity as targets of racism:

“Anti-Black racism continues to be one of the most common forms of hate found in hate-motivated spaces, resulting from our systemically white supremacist, colonialist and imperialist history.”

As published by  Blacklock’s Reporter, PM Justin Trudeau, Minister of Multiculturalism MP Ahmed Hussen, and the Liberal Cabinet have funded a polemic against Anglo-European Canadians. Heading up the project is the Canadian Anti-Hate Network.

“There have been cases where college-level attempts were then used to lodge human and civil rights campaigns, alleging anti-white racism. Don’t play into that and become an unwitting actor in these ploys.”

According to Liberal Cabinet member MP Ahmed Hussen, there is no such thing as prejudice against white Canadians. What a trap this is for citizens of Anglo-European heritage. Extrapolating the information contained herein delivers ominous conclusions.

Under the leadership of PM Justin Trudeau, Canada has transitioned to a pro-Islamic, anti-Christian society. Based on vigilance by which the PM supports the cause, this systemic development is certain to transform Canadian identity in the long term.

As influenced by our federal government, media omit facts and opinion on the subject. Not a single citizen has voted for such a circumstance, nor understood its existence as an implicit goal of government.

A messianic Islamic movement originating in Punjab, India. You would think Justin Trudeau died and went to heaven.