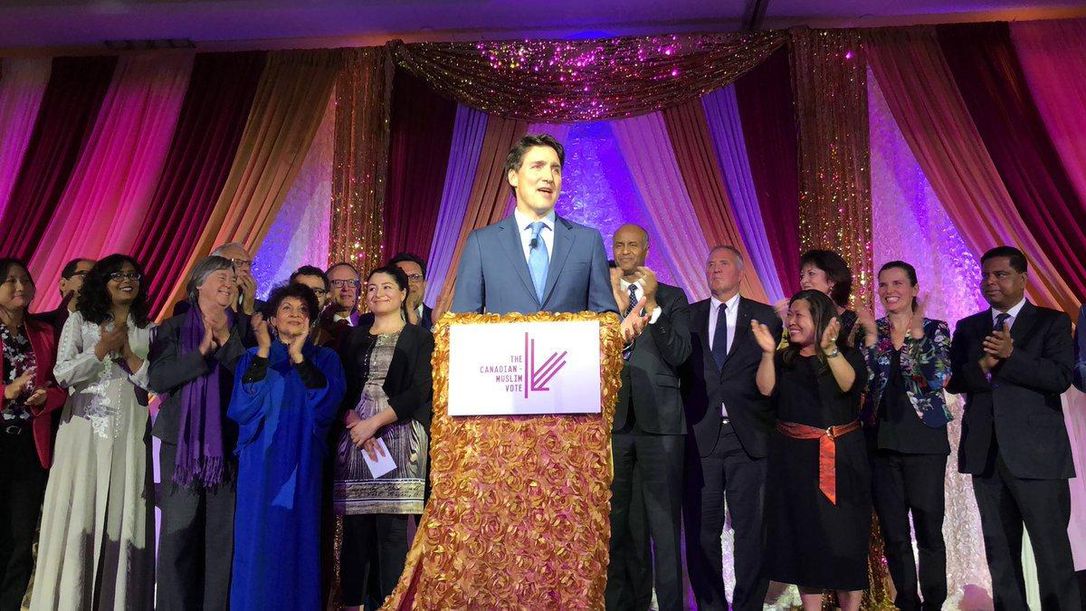 “Today, Muslims in Canada and around the world will mark the end of the Hajj, the annual Islamic pilgrimage to Mecca, and celebrate Eid al‑Adha.

This year, as we continue to fight the COVID-19 pandemic and follow health guidelines to keep each other and our communities safe, celebrations will look different – especially for those who were unable to participate in the pilgrimage.

CAP Question: Since when is the ancient ritual of Islamic pilgrimage to Mecca become front-and-centre in terms of Canadian government priorities?

Think about it, fellow patriots: At the very same time PM Trudeau is on the hot-seat for corruption regarding the WE Charity, the man does not lose a beat in terms of paying tribute to his chosen faith.

Only thing is–Canada is not supposed to have a “chosen faith.” Our Constitution– particularly his father Pierre Trudeau’s Charter of Rights and Freedoms— calls for social and community equitability within society.

No surprise–Justin Trudeau breaches the Charter in this capacity. What went down amidst the Covid-19 panic?  As it occurred, Easter and Ramadan occurred at the same time in 2020.

For Ramadan, Trudeau blessed Islam with a shout out to all Muslims around the world. Virtual Ramadan celebrations were arranged from coast-to-coast. Ottawa, Calgary, Halifax, Mississauga and a dozen other Canadian towns blasted public prayers from loudspeakers proclaiming “Allah is the only god.”

As for Easter, nothing of the sort ocurred. PM Trudeau placed no emphasis on the holiday. The Liberals did not encourage public Easter prayers. No extra effort was drummed up due to Covid-19. The whole thing was purely “business as usual.”

Here’s something government will never tell you: Approximately 75 days out of the calendar year contain a form of tribute to Islam in Canada. 30 days of Islamic Heritage Month, 30 days of Ramadan make up the bulk.

Conversely, Christianity has two days per year–Christmas and Easter. Not telling, eh? Wethinks it means VOLUMES. CBC think it means nothing.

What This Tells CAP:

The Trudeau government are pro-Islam, and anti-Christian.

What This Tells 38 Million Canadians:

Nothing at all–because CBC and Trudeau’s globalist media socialists in no manner point this out to the people of Canada. Obviously, that is not their job. Wanna see something quite amazing?

Try doing a google search on “CBC Islam.” If the results are like CAP’s, there you will find article after article promoting the Nation of Islam. Dozens of CBC articles appear on all aspects of Islamic religion, culture and heritage— and not one is critical in any manner.

Pure promotion is the situation. Now, let us flip to Christianity in Canada:

The American government declares that mass murder of Christians in the Middle East and Africa is an act of genocide. Canada refuses to do so. Nigeria–the number four source nation for migrants to our country as we speak– is known to persecute and murder Christians on a regular basis.

What does Justin Trudeau— a French-Catholic and good buddy of Prime Minister Emmanuel Macron–have to say about this situation? Why, it is nothing at all.

Meanwhile in the midst of his mother, brother, wife and step-brother’s illicit involvement in the WE Charity-Kielburger-Globalist-Non-Profit scandal,  King Trudeau simply could NOT hold himself back from paying tribute to the community he personally prefers– the Nation of Islam.

CBC say nothing. Globe & Mail question nothing. What else to conclude other than the idea that establishment media in Canada work for the very same forces?

This began the day Trudeau was placed upon the throne of Canada. This is where his boss-men want him, and this is where he will be staying while working an agenda to trans-ition the dying Great White North into the country of his dreams– a socialist nation-state dominated by religious fundamentalism.

1 thought on “Trudeau Follows Up WE Charity Interogation With Tribute To Islam, Eid, Mecca”