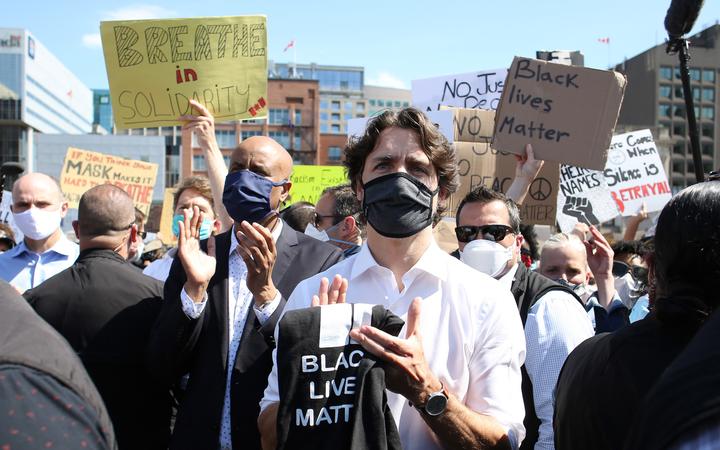 As reported by PressProgress, one image shows a June 2020 rally at Calgary City Hall protesting the police murder of George Floyd, while another shows Black Lives Matter protesters with signs referencing the killing of Abdirahman Abdi in Ottawa.

Commenting on the promotional material, Adora Nwofor, President of Black Lives Matter Calgary, stated that “there are so many images and video that could have been used where Black people did not need to have their messages erased.”

“There is no need to show a BLM protest and then also censor those folx,” Nwofor said. The Black Lives Matter organizer believes that “the Liberals do not want to show solidarity with defunding or abolishing and that is why the police was blurred.”

It turns out BLM are not happy with the Liberals leveraging their messaging for the purposes of winning an upcoming election. Another community would fall into this category as well. Here Cultural Action Party reference millions of white Canadians bound to be put-off with Liberal Party campaign strategy.

That is, if they were to become aware of the situation. They will not, because it has not been exposed by mainstream Canadian media.

The fact is, BLM promote racism against an identifiable community. In the real world–away from “woke culture”– this is known as a breach of the Charter of Rights and Freedoms.

Just one reason exists as to why this has never been referenced within political discourse– the targets are Anglophone Canadians.

Fascinating it is that Justin Trudeau is utilizing BLM to promote equal rights.  Yusra Khogali, Black Lives Matter Toronto co-founder, has the following to say about our current prime minister:

Love you too, honey. Leaders of Black Lives Matter have been quoted making the most outrageous comments regarding white citizens. The quantity is countless–we wouldn’t even begin to list examples.

Do Black Lives Matter qualify as a racist organization? “People see things from different perspectives” said a philosophical Justin Trudeau in response to a media query.

The idea that BLM do not indulge in racism is folly. For just under six years, Justin Trudeau and his hyper-political correctness has spoken out against racism.

After which Canada’s prime minister selects the most virulently “race-oriented’  movement in North America to promote his election campaign. Upon which it turns that like all sensible Canadians, Black Lives Matter don’t want him either.