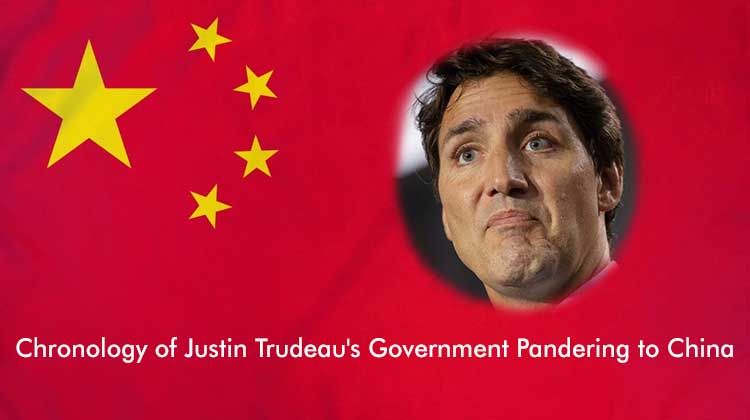 For 70 years, the Five Eyes intelligence alliance, composed of Canada, Australia, New Zealand, Britain and the United States, has worked to combat international threats and espionage. It has been a most exclusive club.

Now, there’s an even more exclusive club: the Three Eyes. Canada is not part of it.

According to the National Post, “the Trudeau Liberals have allowed Canada’s foreign policy to sit on the back burner as they pontificate about trendier social justice topics.”

“The Three Eyes pact aims to confront the nation’s growing military and political influence. Unfortunately, when it comes to China, Trudeau’s Canada simply can’t be trusted.”

The Trudeau government had a choice. To re-invigorate Canada’s relationship with the United States in the post-Donald Trump era, or to continue their sycophantic “little brother” dealings with China.

The United States, U.K., and Australia consider China a major threat. Conversely, it was only a few years ago that Trudeau, when asked what nation he admires most, responded, “There’s a level of admiration I actually have for China.”

There is now a concern over whether China interfered in Canada’s recent federal election. Mainstream media articles suggest that the Chinese government influenced results in a dozen Canadian ridings– enough to capture a win for the Liberals.

Returning to the National Post, we find that “Trudeau seeks to downplay the Three Eyes announcement as little more than a way for the U.S. to sell nuclear submarines to Australia.”

“This is clearly more than an arms deal; it’s the start of an organized democratic opposition to the world’s biggest threat to democracy.”

And the winner is: the world’s biggest threat to democracy. PM Justin Trudeau has made the selection. Rather than deepen ties with western democracies, the Liberal government choose China.

There is more to come. This week another group of major democracies, dubbed The Quad, hold their first in-person meeting in the White House. It includes the U.S., Australia, India, and Japan. The Quad is expected to announce several agreements related to China, which Canada will once again be left out of.

While Canadian media has in this case delivered the goods, they perpetually hold back on the motivation. Why is the prime minister of Canada choosing the communist nation of China over democratic societies such as the USA, Britain and Australia?

The answer found in Canada’s incremental transition away from a democratic society, and toward an ersatz dictatorship. Immigration is the vehicle to get the job done. The policy results in an ever-growing contingent of Liberal voters, to the point where the party are never again defeated in a federal election.

Time will tell if our prognostication is correct. Let us trust that time will also reveal whether or not Justin Trudeau understood this agenda of “progressive” politics from day one.