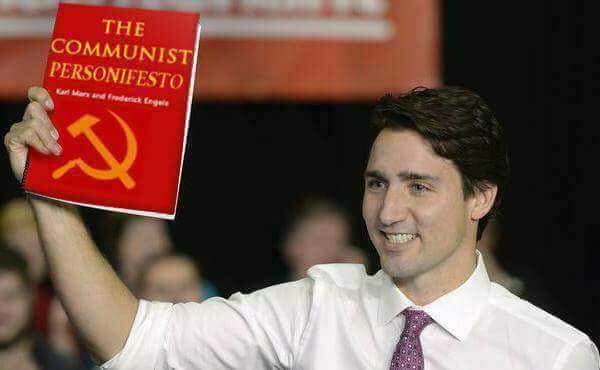 “In the former Soviet Union, the policy of restructuring the economic and political system. Proposed by Leonid Brezhnev and actively promoted by Mikhail Gorbachev, perestroika originally referred to increased automation and labor efficiency, but came to entail greater awareness of economic markets.”

Regarding this week’s Liberal Government Budget, veteran economic authority Terence Corcoran has the following to say:

“We should call it what it is: Reverse Perestroika.”

“When Soviet President Gorbachev attempted to reform the Soviet economy in the 1980s, his motivation mirrors the claims of the new Liberal reform plans.”

Let Cultural Action Party be perfectly clear: we are not economists, or experts in international finance. Our organization began as a watch-dog group for Canada-China relations. Our focus is what we believe to be Canada’s transformation from a free and democratic country to pseudo-communist society.

For the past five years, CAP has been pointing out myriad examples of this phenomenon. Financial Post journalist Terence Cororan hereby delivers an economic affirmation of CAP theory.

Canada is going communist. From social policy to the advent of a one party state driven by the immigrant vote, countless signs of national transformation are today apparent.

That is, if one ignores mainstream media, and of their own volition works to discover the pending fate of our nation.

“The 724-page Liberal budget, a document worthy of the great Gosplans[Soviet State Planning Committee]  that dominated Soviet economic life, lays out a massive increase in government spending and debt in a document whose essential aspect is to weaken the role of markets and enhance the power of government and planners.”

There it is, for all Canadians to read. Turning the tables, let us serve up a piece of information that has never been available for citizens to read:

“I wouldn’t be prepared to think I would be successful in arguing that communism for Canada at the present time. But such times might come, who knows?”

Considering the words of communist enthusiast Pierre Trudeau, could his statement fall into the category of the “politically prophetic?”

Darn right it could–the very reason 38 Million Canadians have not rested their eyeballs upon a single media reference to the Great Reset seduction of society.

From the theoretical to the pragmatic, via Terence Corcoran:

Simply stated, PM Justin Trudeau is enslaving Canada to the globalist banking industry. Who, pray-tell, is the “founding father” of this post-modern trend?

The correct answer is Pierre Trudeau.

An amazing coincidence, no?  As tag-team partners in economic degeneration, the Trudeau family have transitioned Canada to a debt-ridden slave to economic globalism.

Degree of exposure from CBC, CTV, Globe & Mail and the rest? Nothing– not one darn word.  Are media working for the Liberal Party of Canada? If they are, we have yet another example of an emulation of communist political methodology.

Then came Covid. Moving toward the sociological, we find that the pandemic has introduced yet another emulation of life found within communist nations:

Canadians must adhere to every demand  made by government. If we breach the mandate from all three levels of government– Federal, Provincial and Municipal— we risk police harassment, fines and possible jail time.

Just as it is within communist societies. Just it is in the preferred nation of Justin Trudeau, as well as Pierre Trudeau before him: China.

Witness how neatly all this fits together. Canada is today in a state of transition from democracy to dictatorship. Too bad establishment media are now in the business of disseminating communist-style propaganda.

If not, a majority of Canadians might understand post-modern reality as advanced by the “leadership” of Prime Minister Justin Trudeau.