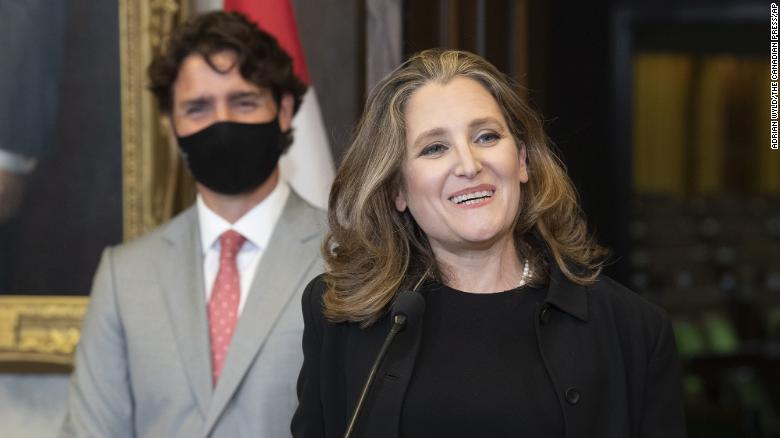 “We are seeing increasingly people in public life and people in positions of responsibility, particularly women, racialized Canadians, people of minority or different community groups, being targeted because of the increasing strength of your voices,”  Trudeau said in an address this week.

In a televised statement, the prime minister said that Canada needs “more women and racialized Canadians in media.”

PM Trudeau addressed the incident during an announcement on funding for an action plan to support LGBTQ2S+ communities. He said what Freeland faced isn’t isolated and is being seen with increasingly by people in public life, “particularly women and minorities.”

“Threats, violence, intimidation of any kind, are always unacceptable and this kind of cowardly behaviour threatens and undermines our democracy and our values and openness and respect upon which Canada was built,” Trudeau said.

Several takeaways are in order. Firstly, Canadians must recognize a profound truth: Justin Trudeau is never going to change. His brain is locked into a way of thinking designed to divide Canadian from Canadian.

Part of his modus operandi is found in accusations toward society which apply to his personal behaviour as prime minister. Who has undermined democracy in Canada more than Trudeau? The answer is no one. Over the past six-plus years, our PM has instituted a social dynamic best described as “victim culture.”

There are the sufferers, and there are the perpetrators. The lines are clearly defined. The suffering are communities Trudeau backs in perpetuity: LGBT, Transgender, Muslims, Sikhs and various 3rd World migrant communities.

The perpetrators are everyone else. Not their predecessors, forefathers or any particular segment of Old Stock Canadian society. Justin Trudeau has branded our entire nation guilty. At all times, forever and a day, Canadians should be wallowing in the guilt the PM says is exclusively ours.

An article printed in the Toronto Sun this week speaks to the social dynamic:

‘Canada’s Divider-In-Chief is Trudeau, Not Poilievre’

And this will resolve the situation how? What is Trudeau really after here? Is it a coincidence that the advent of a second Trudeau family PM resulted in the greatest fragmentation in modern Canadian history? Can it be that the elevation of race to the pinnacle of social issues is a random, spontaneous development?

Yes– if a Canadian lives under a rock, or is a daily follower of CBC News.

Why the clean demarcation amongst pluralist communities into oppressor and oppressed? There has to be a reason, doesn’t there? Such a circumstance never occurred previous to Trudeau’s installation upon the throne of Canada.

Expect not a darn thing to change. While the Liberals preach “progressive” social politics, no federal government has ever before been locked into an ideological agenda like the current Trudeau government.

“A group of reporters for weeks have been publicly sharing a series of private and anonymous emails that they have received and which contain targeted threats of violence and sexual assault, along with racist and misogynistic language.”

Government and media blame those who dislike the direction government is taking our country. In an authentic democracy, public opinion is taken into consideration by a ruling government. Within a false democracy, majority opinion means nothing.

This latter is Justin Trudeau’s Canada. What of this targeting of Canadian journalists? Is it not a matter of media existing as proxy for collective animus toward government? Of course it is. Why on earth would media say as much? Media in 2022 do not speak out against “his master’s voice.” The press are not in a position to defy Trudeau– he signs their pay-cheques.

We arrive at a dynamic infused within non-democratic societies. In perpetuity, the fault lies with “the people.” In Canada’s case, racist and misogynist folk, exclusively comprised of citizens of European heritage, according to Justin Trudeau.

What good does all this do for our country? If nothing, why does our government continue with policies proven to divide society? The answer is simple: because it is government’s intent.

For what reason? CAP call it the Woke Revolution. Justin Trudeau is in the process of revolutionizing Canada. At the core of its ideology is a pursuit of vengeance. Our PM wants an inversion of society. It’s fundamentals are found in a “divide and conquer” strategy rooted in Marxist revolutionary theory.

Divide and conquer, Justin Trudeau. It worked for the communist revolutions of history. Now, our PM is applying the strategy to Canadian society.