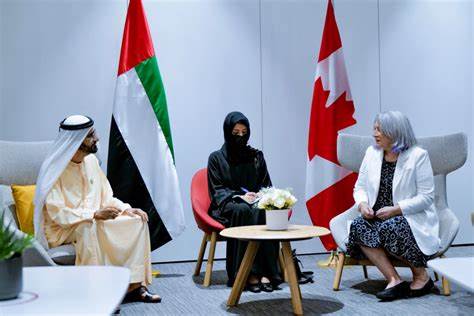 At the request of Prime Minister Justin Trudeau, Governor General of Canada Mary Simon is visiting United Arab Emirates, Qatar and Kuwait from March 17 to 23, 2022.

Degree of exposure from Canadian media? Nothing. Who knew that our Governor General is off building ties with fundamentalist Islamic nations? Certainly not 38 million Canadians. The role of a Governor General includes nothing about establishing partnerships with theocratic Middle Eastern governments.

The Governor General was briefed by Sheik Al Aqroubi on House of Wisdom’s features and services and visited ‘Chapters of Islamic Art: Ettinghausen’s Private Collection of Rare Books’ exhibition. In exchange, Mary Simon engaged children in a riveting storytelling session of “Fishing with Grandma.”

The constitution of Kuwait states that Islam is their official religion. Islamic Sharia Law is the main source of Kuwaiti laws and legislations. Sharia Law is a main source of government legislation according to the constitution of Qatar. In United Arab Emirates, Sharia law is used in specific circumstances. Individual emirates have suspended some Sharia punishments such as flogging, replacing them with jail terms and most Sharia system is only enforced to the citizens.

Thank the Lord for that. The prime minister of Canada, Justin Trudeau, has instructed Governor General Mary Simon to established cultural ties with countries which maintain Sharia Law as a legal foundation.

Rather than consider this act of “diplomacy” relevant to Canadians, legacy media have buried the entire development. As a result, efforts to forge ties with Middle Eastern theocracies are going on behind the backs of the public.

“In this time of crisis for the rules-based international order, why am I here? Why is the governor general of Canada undertaking this visit to the United Arab Emirates?”

“I learned about the other world, the non-Inuit, non-Indigenous world. I saw the way our people were treated. Many children were sent away to residential schools, where they lost their culture and language. Some never made it home at all.”

Now, in pay back, the rest of us are going to lose our culture. Mary Simon is teaching international Muslim youth that Canada is a country founded on colonialism and genocide. It is not good enough to weigh down our citizenship with this historical burden. PM Trudeau has instructed Ms. Simon to promote the concept throughout the Muslim world.

For what purpose? Why the promotional tour of Sharia-compliant nations? There has to be a reason, and there is: Canada is ear-marked for nation-changing transformation. We used to be a country. Today we are an immigration repository for building a post-modern society. While the exact outcome may be hard-to-define, one aspect was been written-in-stone:

Anglophones and Christians are the designated “fall-guy” for the project. These communities are to be marginalized, and over time, usurped. The agenda has been in the works for a half-century. It’s catalyst was ex-PM Pierre Trudeau. It’s modern-day evangelist is Justin Trudeau.

What does all this tell us about Trudeau’s attitude toward Sharia Law? While he doesn’t appear to be chomping-at-the-bit to integrate it into Canada, he doesn’t stand in opposition either. He is cool with archaic, misogynist 6th century law.

“In countries where the legal system is based on Islamic Sharia law, stoning is the penalty to be used to punish adultery.”

Perhaps Mr. Trudeau got confused. He meant that “getting stoned” is perfectly fine. That is, on the marijuana legalized for the purpose of receiving the youth vote. The kind of stoning we are speaking of is 100% antithetical to the concept of women’s rights.

Does any of it make a difference? Not in the slightest. Justin Trudeau can do whatever likes and still remain national leader. Just as it is within communist China. As it exists in theocratic Middle Eastern countries. This, fellow patriots, is your Canada. It is not an abstraction– it’s the real thing. And much more is coming our way, to the point where Canada will be unrecognisable relative to its first 155 years of existence.

As far as the role of Governor General, it too has transitioned to post-modern status. Mary Simon’s role is to facilitate Justin Trudeau’s new Canadian order.