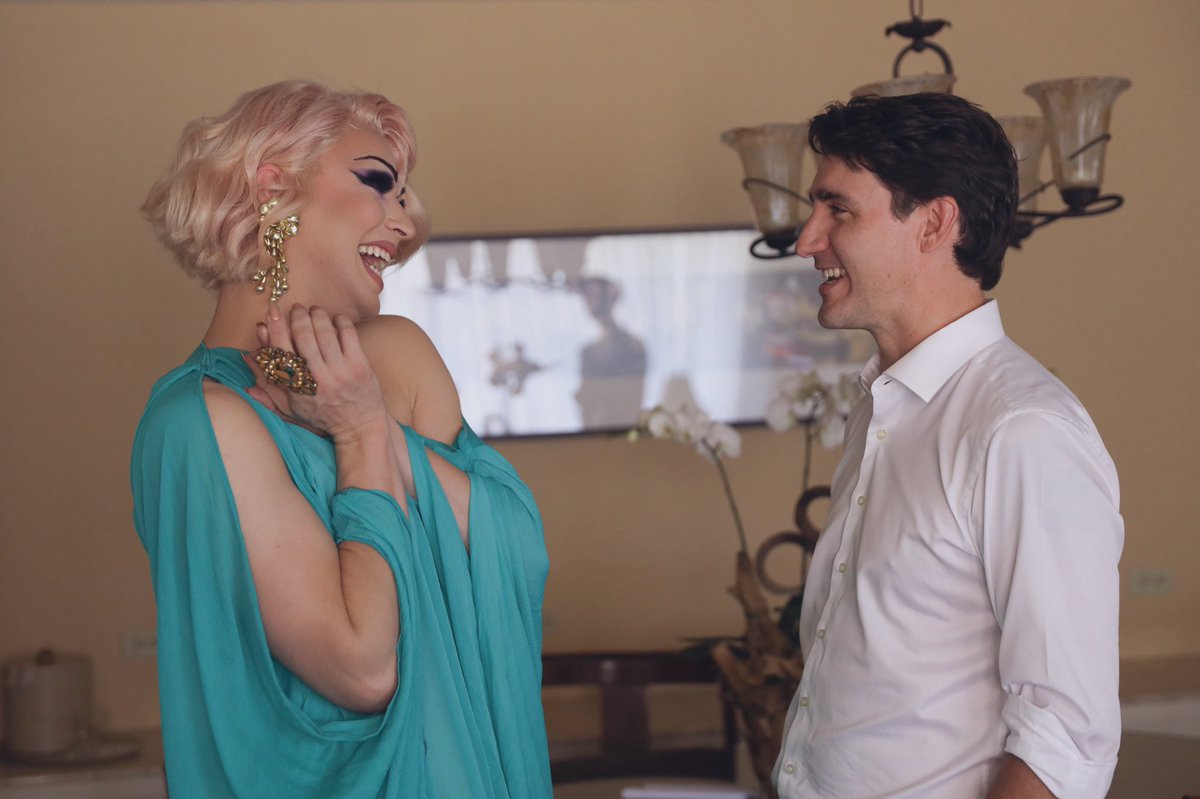 Prime Minister Justin Trudeau made an appearance on a recent episode of Canada’s Drag Race: Canada vs. the World to offer the contestants words of inspiration before the main challenge:

“It doesn’t matter what your background is, where you’re from, who you love – you enrich this place.”

Transvestites may feel the love growing within Canada’s prime minister, but rest assured, this doesn’t extend to all identifiable communities. In reality, Mr. Trudeau is highly selective in his praise for communities within our pluralist society.

Over the course of his seven-year tenure as prime minister its been very much a case of the “haves and have-nots.”

The division is intentional. Justin Trudeau is tasked with establishing a post-modern Canada. Within its structure, some are damned; others vilified.

By all accounts, Mr. Trudeau’s obsession with trans-fetishism remains a curiosity.  The world of Trans is one of his primary fixations. Throughout seven-years of devotion, not once has mainstream media drilled into his motivation.

Why does he do it? The query becomes even more queer when we witness our PM’s additional passions. Canadians of Muslim heritage being one. In a situation bordering on the absurd, Trudeau is as dedicated to fundamentalist 7th century religion as he is toward functioning as a Drag Queen.

Degree of contemplation at the hands of the CBC? Nothing. Analysis of motivation as espoused by Toronto Star and Globe & Mail?  Again– nothing. Turns out that legacy media are as pro-Trans as Trudeau himself. Just another coincidence, is it?

Justin Trudeau rants on about “inclusivity” within our society. In practice, his behaviour is exclusionary as heck– like this:

Of the Truckers Convoy in Ottawa in early 2022, Trudeau had the following to say:

“Freedom of expression, assembly and association are cornerstones of democracy, but Nazi symbolism, racist imagery and desecration of war memorials are not.”

Branding working class Canadian racist for attending the Ottawa protest is in no manner respectful of the Charter-given right to free assembly. These people are not Nazis. The statement is an outrage of the highest order.

“Today, Muslims in Canada and around the world begin observing the sacred month of Ramadan. Whether it’s getting together with family and friends, keeping fast, or sitting down for iftar—Ramadan means something different to everyone.”

“It remains one of the holiest holidays in the Muslim community. It’s a time for prayer, a time for reflection and self-restraint, and a time to celebrate the values at the core of Islam.”

CAP simply wish to understand. “Core Values” in the Islamic faith are holy, sacrosanct, and a fundamental of Canadian society. So too are the values of Transvestism– a principle antithetical to the religious teachings of the Koran.

In post-modern Canada, core values in society are whatever Justin Trudeau says they are. No wonder he has such admiration for communist China. Their dictator-president is in the same position.

“We are so lucky to have this amazing man as our leader! Accepting and loving of all people! He makes me so proud to be Canadian!”

Such is Liberal snowflake admiration found on Twitter. The lady is wrong, but what difference does that make?
CAP has followed the tenure of Justin Trudeau with microscopic precision. Throughout his sevens years as PM, the man has never made a public statement alluding to, or referencing English Canada, or Anglo-Canadians.
Has our PM transitioned Anglophones to the periphery of society? What about the burning of some three-dozen Christian churches in Canada? After which Trudeau branded the arson attacks “understandable.”
Does he recognize Pro-Life Canadians? No. How about Canadians who believe in a right to control what enters their bodies?
For the vaccine hesitant, not at all. For the homosexual community, absolutely:
Bill C-75 repeals a section of Section 159 of the Criminal Code. The legislation removes “a longstanding point of discrimination against gay men by eliminating the unequal age of consent for anal sex in Canada.”
What’s with Trudeau’s concern for anal sex at the tender age of 16 years? Isn’t it rather odd that government would put such energy into a fringe issue of this nature?
Why is Justin Trudeau obsessed with Trans in all its permutations? Not a word flows from the pen of mainstream media. Generally, when researching issues of this nature, Canadians would do well to turn to the World Economic Forum.
CBC won’t say so, but to do so reveals enlightening news:
“The UN LGBTIQ+ Standards Gap Analysis Tool is a self-assessment and learning platform to help companies of all sectors and sizes to operationalize the United Nations Standards of Conduct for Business: Tackling Discrimination Against Lesbian, Gay, Bi, Trans, and Intersex (LGBTI) people.”
“The original idea for developing these standards came from a panel discussion I was involved in at the World Economic Forum Annual Meeting in Davos in 2016.”
‘Talkin’ Bout An LGBT Revolution’
Justin Trudeau pushes the trans-ticket because he is an advocate and agent for WEF’s global revolution. Inclusive of the revolution is the hard-done-by gay and transgender communities.
The agenda is clear: homosexuals and the transgendered now qualify as suffrage  communities. Adding new vitality to existing race-oriented suffrage, World Economic Forum sets out to revolutionize the planet.
Other considerations come into play. Trans is anti-male. It cuts down on birth-rates. The process turns healthy males into passive sissies. On a sociological level, the male tendency toward rebellion becomes pacified. Corporations make money from related growth in fashion and cosmetics. But more than anything, it is the weakening of the male species that so turns on woke warriors like Justin Trudeau.
“It is clear that these folks are, in fact, Trudeau’s scene. He was delighted to be there – the last time he looked this happy, he was flicking his tongue about and frolicking at the Pride Parade.”
Yes, Justin Trudeau is thrilled-to-bits. All negative repercussions from transgender surgery and hormone treatments fall by the wayside as Grade 3 students experience the thrill of Drag Queen Story Time in school.
We witness the seduction of western society. Not in China, Iran or Pakistan. Never to be found in Somalia or Syria. No– Trans is an exclusive of western democratic societies.
“This is groundbreaking,” the head drag queen noted. “The first-ever world leader to visit a Drag Queen set! Trudeau, of course, was modest: I’m glad I’m the first, but I look forward to the time when there’s a third or fourth,” he said.
More, more, more–the globalists never stop. While demonizing all factions of conservatism in Canada, Justin Trudeau has won the hearts of transvestites from coast-to-coast.
Why so dedicated, when less than one percent of Canadians qualify as transgendered citizens? A core Canadian value?
Hardly, Mr. Trudeau.

3 thoughts on “Trudeau Advances Transgenderism As A Core Canadian Value”