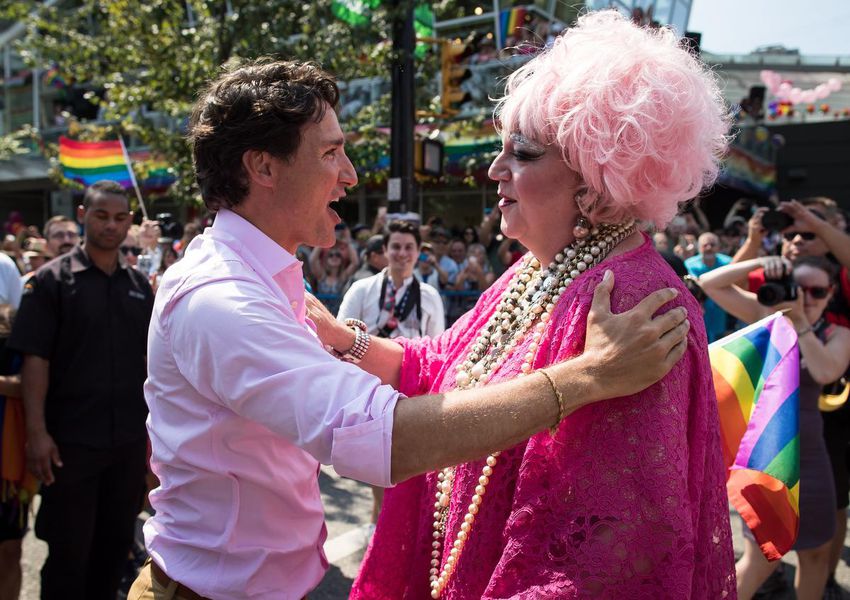 Regarding the topic of transgenderism, people around the world are presently laughing in Canada’s face:

“We are ruled by insane people. I mean that literally: we have created a society in which everyone has to bend over backwards to accommodate the insane. Like that man above, a transgendered woman who wears massive prosthetic tits to his job AS A HIGH SCHOOL TEACHER in Canada.”

As if the insanity stops there. Equally outrageous is the fact that the Canadian High School where the incident took place has the nerve to defend the actions of one of their star educators:

“As a school within the Halton District School Board (HDSB), Oakville Trafalgar High School recognizes the rights of students, staff, parents/guardians and community members to equitable treatment without discrimination based upon gender identity and gender expression.”

Canadian educators have degenerated into a perplexing lot. By any measure, the arrogance under which they operate is an outrage. As long as a “teachable moment” falls into the trans-for-youth category, every action is rationalized by public school boards in Canada.

“The man seen in the photos and videos is a Manufacturing Technology instructor who allegedly began identifying as a woman last year. The teacher now goes by the name Kayla Lemieux.”

Simply stated, Kayla Lemieux is an idiot. But it won’t stop “they’s” idiocy from being experienced by Canadian children. In what has to be the most surreal circumstance in modern society, all this frilly pink-frock activity in our school system falls under the banner of “quality education.”

It’s nothing of the sort. Canadian society has fallen victim to the machinations of the Transgender Industry. Out-to-lunch educators like Lemieux encapsulate the movement’s inane talking points.

The employee will be supported, adding “the teacher is completely accepted and welcomed into the school community as far as the staff is concerned.”

Looky here– an entire gang of idiots. It’s par for the course in a Canada where Prime Minister Justin Trudeau has for seven years extolled the “virtues” of transgenderism  regardless of age.

Away from the woke liberal media protectionism surrounding transgenderism in Canada, the times they are a’changin:

“A Florida school board has voted down recognizing October as LGBTQ History Month.”

Throughout the United States, the anti-transgender movement is picking up steam. Like the lifting of Covid restrictions, PM Justin Trudeau is loathe to anger his LGBT-friendly voters.

Don’t you know? Perhaps media has yet to inform you. Our prime minister is transitioning Canada to the transgender capital of the world. Or rather– of the western world. Turns out the nations the PM venerates– China and Middle Eastern countries– have no transgender movements.

LGBT does not exist in Saudi Arabia, Iran, Syria, Somalia, or any other theocratic nation Justin Trudeau ships billions of foreign aid to on an annual basis. Yes, the western world is ground zero for the feminization of the male species. Why Justin Trudeau admires this social trend is anyone’s guess. Perhaps it comes down to a case of fetishism.

Back in the USA, the backlash continues to roll:

“As parents become more aware of what radical activists are teaching their kids in school, a group of House Republicans held a “Back-to-School Roundtable” on Capitol Hill aimed at protecting children from LGBT ideology.”

There shall be no such thing in Canada. Certainly not with the Liberal Party calling the shots.

“We have seen school boards, teachers unions, and even the Department of Justice attempt to hijack parental rights. But these people do not have our kids’ and grandkids’ best interests at heart,” Rep. Debbie Lesko, R-Ariz., said in her opening remarks.

And what, pray-tell is the etiology of a society in which the state can overrule parental desires for their children?  Look no further than China, and its Marxist political identity. Communist ideology imposes the concept that citizens must be subservient to the state regarding all matters within society.

In 2022, the Canadian public education system adheres to Marxism. In this regard, check out what occurred in Ireland this past month:

“Saying transgenderism is against his Christian beliefs, an Irish school teacher has been suspended from work and jailed for contempt of court.”

Sound familiar for students of history? Isn’t communist China well into this phenomenon? The Chinese government oppress Christians on a regular basis. Now, it exists in Ireland.

We begin to recognize a pattern. Let us, as a quick experiment, remove the specifics from the scenario. Let’s put aside the trans-element within the equation, and instead focus on the political dynamic itself.

We are speaking of jail time for opposition to government-enforced ideological belief. Is this not the same scenario experienced within socialist and fascist societies of history? Darn right it is. China, Soviet Union, Fascist Europe in the 20th century. In each case, a breach of adherence to government ideology resulted in persecution of political dissidents.

Witness as the Liberal Government instills the experience within Canadian society. Are Canadians now living in a socialist dictatorship? If so, won’t  be hearing about it from mainstream media.

Welcome to the world of “Pink Fascism.” It’s pure foolishness, but what sensible Canadian wouldn’t expect as much from people-kind Prime Minister Justin Trudeau?