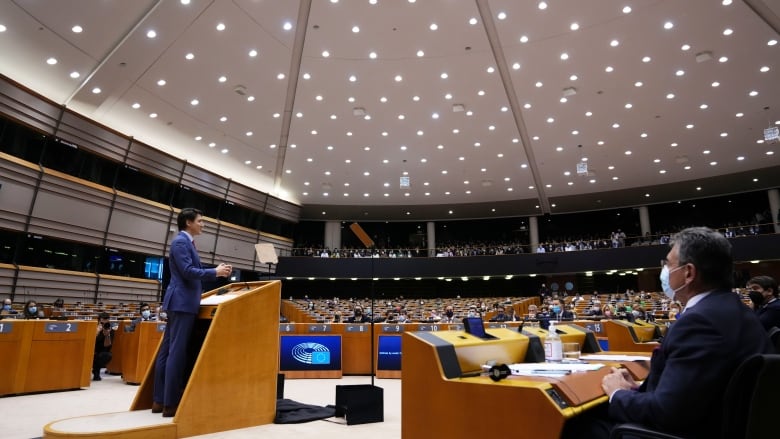 A meeting of the European Parliament in Brussels last week reveals what should be seen as a pivotal development in Canadian politics. With Prime Minister Justin Trudeau in attendance, a collective of Parliamentarians ripped into Mr. Trudeau, branding him a Dictator within a democratic country.

Never before has such a circumstance occurred. The magnitude of the event should be understood by all Canadians. The fact that it won’t be is indicative of the nature of the accusation. Within dictatorial societies, media are charged with converting damaging political events into conditions palatable to public ears.

Thus it was that state-funded CBC News branded Trudeau-bashers in Europe as a gang of racists and anti-vaxxers. One MEP called out the prime minister for trampling on “fundamental rights by criminalizing his own citizens as terrorists just because they dare to stand up to his perverted concept of democracy.”

Canadian media get to work. Removing the sting of the accusations, damage control is employed to protect the prime minister. Like so many aspects of society, the press has undergone dramatic transformation. At one time a mechanism for objective news delivery, media now serve as an instrument of government. Today, they work for Justin Trudeau. Naturally, this isn’t going to make front-page news. Neither government nor media are bound to shoot themselves in the foot in this manner.

The outcome is what one may call a “bubble effect.” The government-media goal being to insulate Canadians from international perspectives on our political arena. With this in mind, we turn to commentary from the EU Parliament:

“Canada, once a symbol of the modern world has become a symbol of civil rights violations, under your quasi-liberal boot in recent months. To you, these may be liberal methods, for many citizens of the world, it’s a dictatorship of the worst kind.”

Thus suggesting a dichotomy in perspective. For those outside Canada, a growing perception exists that our nation is transitioning to a dictatorial society. Those inside our borders refuse to believe such a hyperbolic claim.

Are Canadians living in a bubble of denial? Are media successfully sublimating political reality? It is a condition difficult to pin down. This is not a black and white, all-or-nothing proposition. A sublimation of freedom and democracy takes place on an historical continuum.

Has our country arrived at a point in time where the rest of the world views Justin Trudeau as a dictator– while Canadians do not? Imagine being deceived in this manner. Will citizens one day awaken to that which the outside world already understands? If we do, will it be before or after it is too late to prevent an erasure of democracy in Canada?

So many questions– so much silence from media on the matter. Rather, they continue to do what they are being paid to do: present the unprecedented as that which has previously been experienced. Transform the extraordinary into the ordinary,  interpret the uncommon as common.

All of it conjuring up the most pertinent question of all: is a day coming when Canadians will awaken to what the rest of the world now perceive?  For how much longer can media  prevent the walls of Trudeau’s pseudo-dictatorship from crashing down?

Surely the authoritarian crackdown of the Truckers Convoy has fired up Canadian brain-cells. If not, the recent Liberal-NDP pact must stand as an indication.

Cultural Action Party go all-in on the eventual awakening of Canadians to the quasi- communist agenda. The question is when. Non-Canadians have cast off the media chains. Are the people of Canada next?

13 thoughts on “The World Sees Justin Trudeau As A Dictator, Are Canadians Next?”