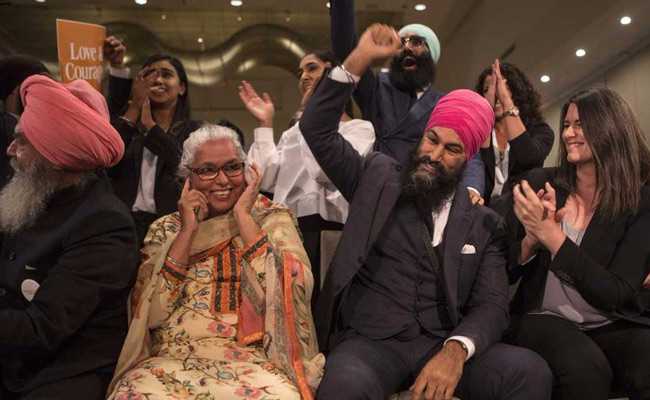 “To brazenly not follow public-health guidelines puts people at risk and that is something that we’ve seen with extreme right-wing ideology,” he told reporters.

The fact that Canadians from all walks of life have refrained from adhering to public-health guidelines seems inconsequential to Jagmeet Singh. The attitude remains consistent– if Singh can figure out a way to associate a social issue with racism, he will do so. Such is the “calling card” of Mr. Singh and his fight against nearly every element of Canadian society.

Just this week, Mr. Singh attended a drive-in for an end of Ramadan event in Mississauga with Taranvir Dhaliwal, who works  for his brother Gurratan — a provincial NDP MPP.

Captured on video was a violation of Covid regulations on the part of the NDP leader. Neither Singh, nor mainstream media, issued a statement on whether or not this confirmed his dedication to right-wing ideology.

Such is the malarky that emanates from this most curious of federal party leaders. A former lawyer who served as a provincial politician in Ontario, Jagmeet Singh became the first member of a visible minority to lead a national political party in Canada when he won the NDP leadership in 2017.

Neglected at the time was the fact that Mr. Singh was literally parachuted into a Vancouver suburb in order to secure as seat as a member of Parliament. Lacking tangible connection to the riding, within two months of arrival the MP seat had been secured. Perhaps it helped that next to white-minority Richmond, Burnaby is the most 3rd World-oriented riding in Greater Vancouver.

From MP to NDP party leader was another hop, skip and jump. As reported by CBC News, Singh raised 53 per cent of all the money collected by the four candidates. His support was largely drawn from his home region of the Greater Toronto Area, which alone represented two-thirds of his fundraising.

How fascinating this is. For one thing, who knew that community members in the GTA– meaning Sikh stronghold Brampton—  cared so deeply about election results 4000km away in Vancouver?

Such were the sketchy circumstances surrounding Jagmeet Singh’s rise to the top of the NDP Party totem pole. Once he got there, he began to indulge in a hobby shared by PM Justin Trudeau: playing the “race card” against those who ideologically oppose his brand of globalist politics.

In June 2020, Singh was removed from Parliament after refusing to apologize to Bloc Quebecois House Leader Alain Therrien. Mr. Singh called Therrien a racist for denying the approval needed for a motion calling out systemic racism in the RCMP.

Not a speck of contrition was heard from a stiff-necked Singh. “I don’t back down from standing up to racism… I don’t think it benefits for me to call people names, I was angry at the moment and I stand by it,” he said afterward.

The NDP Leader was seeking unanimous consent. He didn’t get it– hence the racism accusation outburst. At this stage of the game, Canadians know all about what Jagmeet Singh stands against. As far as what he stands for, that’s another ball game. Media have little interest. Policy presentation is generally met with a shrug from all sides.

If Cultural Action Party didn’t know better(we don’t), we might conclude that the purpose of Mr. Singh’s leadership falls outside traditional elements of party leadership. Curious it is that a technically powerless character such as this has on multiple occasions held the fate of Justin Trudeau’s minority government in his hands.

In each case, Trudeau has been bailed out by the NDP.  Similar in character, both share a knack for race-card pretensions. Could it be that the Trudeau-Singh relationship is, in fact, a tacit agreement for the maintenance of a globalist ethos?

Put it this way: if Trudeau was playing quarterback for the Great Reset Rough Riders, Jagmeet Singh would be sitting on the bench as a back-up.

According to New Indian Express, the NDP leader has more than once openly voiced his support for Sikh separatists in Canada, earning him the tag of being “pro-Khalistan.”

In 2013, Singh was denied a visa to India for criticizing New Delhi’s human rights record, in turn becoming the first western legislator ever to be denied entry into the country.

Jagmeet Singh’s dedication to Sikh politics in undeniable. As for Canada, the man shares Prime Minister Justin Trudeau’s scorn toward the colonial founding of our nation.

What a long, strange trip it has been from the days of a nascent NDP Party founded by Tommy Douglas.  A Scottish Canadian who served as Premier of Saskatchewan from 1944 to 1961, Mr. Douglas was leader of the New Democratic Party from 1961 to 1971.

This salt-of-the earth founder of universal medicare would be turning in his grave if he were to witness the transformation within his party.

In fact, CAP go all-in on the idea that Mr. Douglas would consider the circumstances nothing less than a globalist hi-jacking of the NDP Party of Canada.