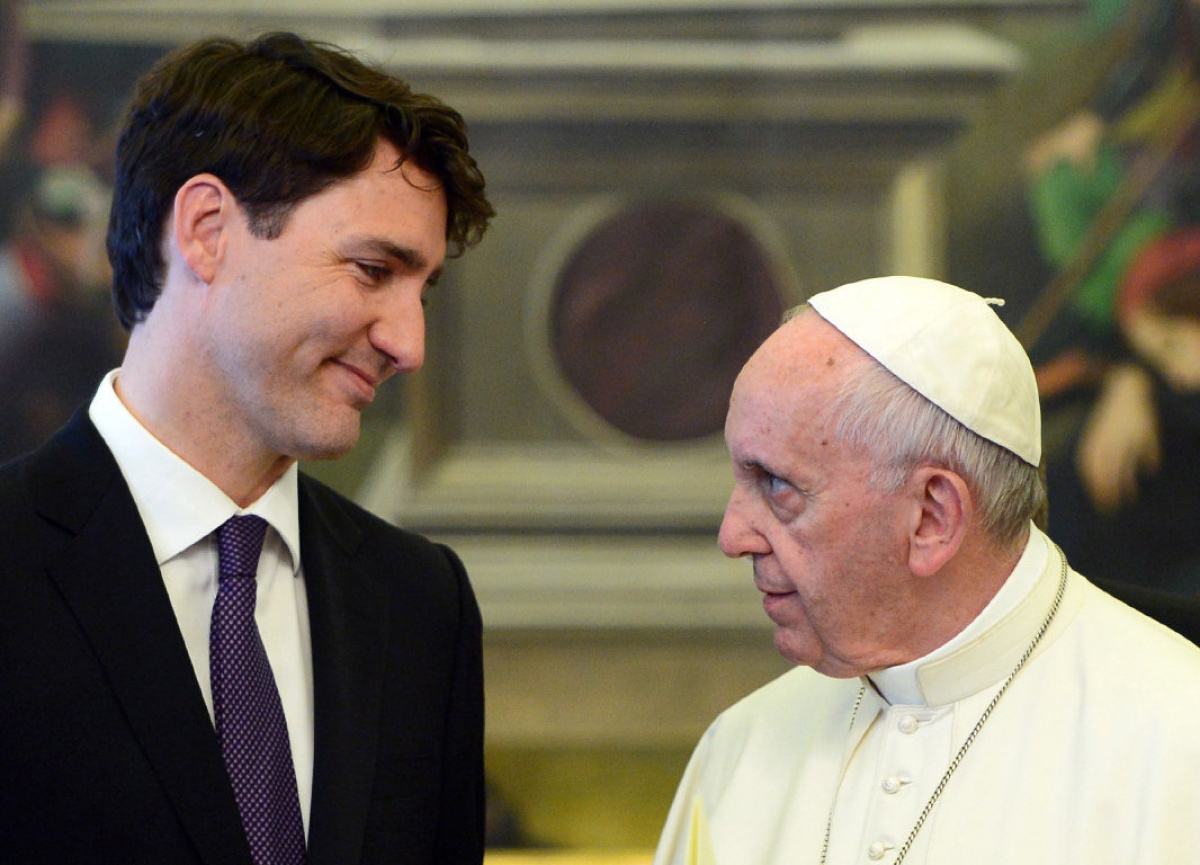 Commenting on the Pope Francis’ recent visit to Canada, Prime Minister Justin Trudeau referenced a statement from the Pontiff:

“His Holiness begged forgiveness for the evil committed by so many Christians against Indigenous Peoples.”

As expected, PM Trudeau eschews all elements of Indigenous persecution which fall on the shoulders of federal government, and the Liberal Party in particular.

According to a Canadian University Indigenous Foundations, the term residential schools refers to an extensive education system set up by the Canadian government and administered by Churches that had the “nominal objective of educating Indigenous children.”

“Set up by government, and administered by Churches” means that government held jurisdiction over residential schools above and beyond the Catholic church. Mr. Trudeau, a self-professed Catholic, chooses to omit a fundamental element of the equation to protect Liberal government interests.

With the passage of the British North America Act in 1867, and the implementation of the Indian Act(1876), the government was required to provide Indigenous youth with an education, and to assimilate them into society. The government collaborated with Christian missionaries to encourage religious conversion.

“From the 1890s until the 1950s, the government tried constantly to shift the burden of the system onto the Churches.”

In 2022, Justin Trudeau continues the tradition. During the period between 1969–1978,  the federal government of Canada was responsible for control and maintenance of residential schools. The Liberal Party was the ruling government from 1968 to 1979. The prime minister throughout this eleven-year period was Pierre Trudeau.

Not a peep from Trudeau the younger on any of this. Why not? The reason is lost on many Canadians. Add to it the fact that mainstream media reflect the identical attitude advanced by the Liberals: the Church is entirely responsible for persecution of Aboriginals, and children in residential schools in particular.

Public deception lingers at the heart of this social dynamic. Successive federal governments are responsible; the Liberal Party most of all.

In order to fool Canadians, government and media have cultivated something CAP call the “Christian Guilt Tour.” Witness as the Pope weeps in sorrow for crimes committed by the Church, while government get off scot-free.

Every article from CBC, Globe & Mail and the rest runs along a monolithic theme. The Church is guilty. And therefore, so too is Woke Canada’s chosen enemy– the Christian religion.

If anything within contemporary Canada represents a form of “religious warfare,” it is the Liberal government’s attack on Christianity, in combination with vehement dedication to Sikhism and Islam.

Such a strange phenomenon. We are speaking of a country built by European of Christian heritage. Up to the point that Pierre Trudeau transitioned Canada to a globalist village, our population was 95% of European origin. By default, white Christians dominated all aspects of society.

Five decades of 3rd World migration transformed Canada’s ethnic demographic. As such, entry to positions of power took time to develop. Previous to 1967 there were, apart from First Nations, few non-white Canadians available to fill these roles.

Historians would refer to this as a country’s “organic development.” Justin Trudeau refers to it as “a criminal act.” It’s a crime that Chinese, South Asians, and Muslim immigrants were not immediately assimilated into the Canadian power structure. From a sociological perspective, the dynamic makes perfect sense. From the annals of Trudeau-brand Liberalism, it’s a Charles Manson moment.

Upon which a light-bulb moment flashes in the collective consciousness of Liberal Wokism. What if we were to combine racism against 3rd World migrants with oppression against Indigenous Canada? Would this not be the most potent of power-grabs?

This is exactly what the liberal-left has concocted. To combine 3rd World and Aboriginal suffrage is to facilitate Trudeau’s woke revolution. The enemy is thus defined: Anglophones, European-Canadians, Christian-Canadians are to transition to nemesis communities of society.

This is why Pope Francis is being paraded around in a wheelchair while Indigenous drum patterns pound in his brain. It’s a contrived political act. Witness as the guilty old white man “begs for forgiveness.” Behind the scenes is sure to be a gloating Justin Trudeau, thrilled to bits with the progression of his war on Canadian identity. He’ll usher in the New Canadian Order if its the last thing he does.

The running of the Pope Francis is vital to the war against traditional Canada. Let us not suffer any illusions. The woke ethos has successfully permeated all aspects of society. From elementary schools to corporate board rooms, from the PMO to the head offices of multicultural non-profits.

The Pope’s Lament is a vital component in the process. Common sense Canadians must understand how socialist revolutions manifest. Will the Pontiff’s visit bring healing and– God forbid– closure to the issues? Not in a million years. Pourquoi? Because what has been offered is not good enough.

There must be more. Always and forever, the Canadian suffrage industry remain insatiable. It’s critical to their success. Where is this all leading? For CAP, it’s the $8,888 million dollar question. For Canadian media, it’s a nothing issue.

What does it mean for the future of Canada that Christianity has been placed in a proverbial doghouse? Is there significance in the fact that the bashing of Christianity exists in direct contrast to government’s approach to Sikhism and Islam? The suffering, the misery, the endless racism against “racialized” Canadians?

“Canada continues to struggle with its immigration applications as its inventory now stands at some 2.7 million people. This represents a growth of nearly 300,000 people over the past six weeks.”

“The backlog has nearly doubled over the past year and nearly tripled since the start of the pandemic.”

Question for the CEO of the CBC: if Canada is so racist, why are over two million non-white potential immigrants waiting at our national doorstep? “Go ask your mother” being the anticipated media response. It makes no sense– but that’s Liberalism as perpetuated by Justin Trudeau and the media he is paying to play spin the political bottle.

Bottom line: Justin Trudeau is using First Nations Canada to achieve his personal objectives. But not to worry– they are not alone. Our Liberal government utilize all ethnic and special interest communities as part of their quest to tear down traditional Canada.

It’s simply the way in which communist governments operate. In a true democracy, government work on behalf of the people. To apply this to Justin Trudeau is a sick joke– unless the people are non-Canadian.

The unfortunate saga of the Aboriginal peoples of Canada will not come to closure with the Pope and his Papal apologies. As Mr. Trudeau says, “there is more work to do.”

For Canada’s aberration of the national leader, the work doesn’t stop until our country transitions to an authoritarian state. One whose villain community is being carved out as we speak: Anglo-European Canadians.

Save the French, of course– Trudeau is one of them.