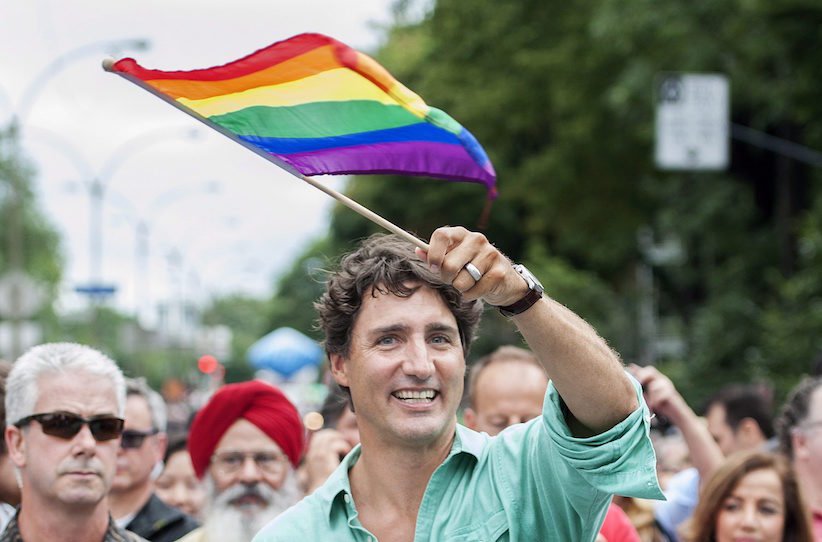 June is celebrated as LGBTQ2 Pride month, but a group in the U.S. wants to recognize heterosexuals in August.

Super Happy Fun America, a Massachusetts-based group, whose slogan is “it’s great to be straight,” is organizing a Straight Pride Parade in Boston on Aug. 31.

Question: When isn’t the LGBT movement outraged? Answer: When nobody questions their agenda, or pushes back against their behaviour. Apart from this, the LGBT lobby are OUTRAGED.

This movement claims to be fighting for “inclusiveness.” It’s a lie. What they are fighting for is control and domination–OF OUR CHILDREN. Disagree with them in any capacity, and watch the “inclusive” result–you are a homophobe and a bigot. You hate gay people.

Conveniently for their movement, the transgender element is lumped in with the general homosexual community. This MUST change. Issues of consenting adult homosexuality is not the same thing as sex change operations and hormone therapy for CHILDREN.

Yet, this is the way LGBT roll.  Hence, an ability to SCREAM HOMOPHOBIA when the issue is the removal of a pre-pubescent’s private parts. Not the same issue IN THE LEAST.

Does this matter to the LGBT-pushers? Of course not–they want MAXIMUM sympathy, and 100% victim-status. The best way for this to be achieved is to place  transgenderism under the broader umbrella of homosexuality.

What the LGBT industry is not interested in is EQUALITY. Common sense Canadians are reasonable to conclude that Straight Pride is every bit as legitimate as Gay Pride. Fair is fair, after all. Within a liberal democracy, any identifiable community must be permitted to express pride in their identity–as long as it does not explicitly TARGET or damage other communities.

Still, the LGBT folks are OUTRAGED. Why? In what respect is a Straight Pride parade harming homosexuals? Are these people NOT grasping at politically correct straws with no logical basis for their positioning. Is this NOT an act of social hypocrisy?

Of course it is. Within post-modern Canada, to be a globalist liberal trans-pushing type one MUST BE a hypocrite. There is literally NO OTHER WAY to get the job done.

So how do the trans-pushers justify their push-back? The response is, of course,  an accusation of RACISM. The parade’s organizers have “close ties to far-right groups,” including white nationalists, say the trans-lobby. This is just SO DAMN EASY. Got a problem with opinions counter to your own? Scream “racism” or “bigotry” and watch the doors of victory open before your eyes.

The problem for the leftist globalists is that this mode of operation is not SUSTAINABLE. One can only “cry wolf” for so long before general society eventually calls your bluff. This is exactly what is occurring at present.

In Canada and the U.S., parents are pushing back against the transgender-for-children lobby, and are beginning to make serious headway. In Sacremento, CA, parents pulled 700 Children from their classes in protest of  LGBT propaganda campaigns in their schools.

“Pride goeth before a fall,” says a proverb. This may well apply to the straight vs gay dichotomy Canadians are witnessing within society. Social equality is a two-way street. Unfortunately, for the LGBT lobby, their street is ONE WAY, all the way and all the time.

Straight Pride? Legitimate and lawful. How about Christian pride? The same rules apply. How so? Because Canada’s Charter of Rights and Freedoms SAYS SO.

Not that globalists, liberals and trans-pushers GIVE A DAMN. These people have been holding the Charter HOSTAGE ever since Pierre Trudeau forced it upon society. The multicult lobby want it to remain the EXCLUSIVE PROPERTY of the left. This is how it has been since DAY ONE(1982). This is a status quo the diversity bandits want to maintain indefinitely.

It does not have to be this way. Parents, Heteros, Christians, Conservatives and the rest ALL have the right to leverage the Charter for community purposes. How often has the establishment mediam in Canada alluded to this truism? The answer, of course, IS NEVER.