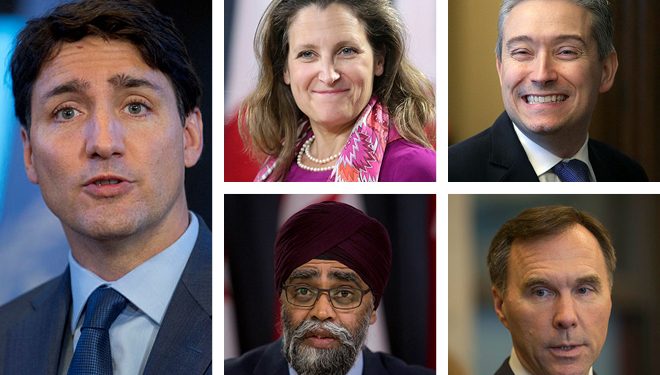 CAP specialize in exposing the globalist methodologies of the Trudeau government, and  the related cover-up of this agenda by way of CBC and other mainstream media sources.

In this regard, one observation has all but alluded establishment media, and therefore the Canadian public as well. Here it is: Although the Trudeau government trans-itioned from a majority to a minority federal government, Justin and his party of Globalist Cultural Assassins are more powerful than ever.

What an interesting political phenomenon. Can’t say that CAP has ever heard of a political “inversion” of this nature–the very reason why CTV, Globe and Mail and Toronto Star eschew the entire concept.

So what can Canadian patriots glean from such a dynamic? CAP will go first: this informs astute observers that our nation is currently in the process of transitioning from a liberal democracy into a socialist-totalitarian nation-state.

In truth, the astute should not be surprised. From the day ex-Liberal Pierre Trudeau became prime minister of Canada, our nation has been walking a steady, incremental and covert path toward an emulation of Pierre & Justin Trudeau’s hero-nations.

China, Cuba, U.S.S.R— these are the governments the Trudeau family most admire–including commie brother-in-the-shadows, Alexandre Trudeau.

Speaking of the latter, how many Canadians know that for a time brother Alexandre  worked as a film-maker of the government of Iran? What percentage of the public are aware of Bro Alex’s dedication to communist China, and communist Cuba?

Answer: A few more than zero. Because the globalist media-puppets have refused to inform the citizens of Canada. Why? Because it would reflect poorly on Justin. Within “post-modern” Canada, it is media’s job to hide, bury and erase the globalist/communist/socialist affectations of the Trudeau Dynasty.

The 42nd Canadian federal election was held on October 19, 2015. The incumbent Conservative Party of Canada of Prime Minister Stephen Harper, in office since 2006, was defeated by the Liberal Party of Canada under the leadership of Justin Trudeau.

The Liberals rebounded from third place in the House of Commons with 36 seats to a strong majority government with 184 of the 338 seats in the expanded Commons. The Liberals picked up 148 seats, easily the biggest numerical increase for a Canadian party since Confederation.

Election, October, 2019: None of the federal political parties hit the 170-seat threshold of a majority government, which the Liberal Party scored when it stormed to power in 2015. Despite winning a plurality of the 338 seats in Parliament and securing minority status this time around, the Liberals lost the popular vote to the Conservatives.

Result: The government of Justin Trudeau is more powerful than ever. Anyone have a though on why this is the case? If not, CAP has a theory:

In federal elections previous to 2015, the basic election dynamic has been binary– Conservative Party Against Liberal Party.

What happened is that Trudeau, advisor Gerald Butts and demographic assassin MP Ahmed Hussen came up with an unbeatable solution:

This, in CAP’s humble opinion, is why Canada is finished as a democratic nation. Pierre Trudeau began the process, and Justin Trudeau is driving the final nail into the coffin.

Media say nothing–not one connection in this regard has CBC made between this father and son tag-team of national decimation. Therefore, it is most obvious that all  this is “in the cards”-– a pre-meditated agenda for the destruction of 153 years of national existence.

A slight divergence: You know, if things were really fair within Canadian society, our media would be presenting an entirely different picture. What Canada should have are specific articles on immigration to Canada. What are the top source nations? How have the source nations shifted? If China was number one in 2012, and India is number one in 2017, all this should be printed and exposed within media.

To refrain from this is improper national leadership. Hiding the fact that, for example, migration from Nigeria has tripled in the past few years, and that this nation is today #4 on the “Migration Charts” is information that should be readily available to the people of Canada.

Rather, government and media hide all this away. What does this accomplish? How about community deception, feelings of subterfuge and general social paranoia.

But ather than come clean and play it straight with Canadians, Trudeau does the opposite: He hires a Somalian-Islamic-Refugee as immigration minister, and in a clandestine manner the two them go about “sneaking” Africa into Canada without the knowledge of the general public.

Want some more deception? This is it: Justin Trudeau and his motley crew of Culture-Killers are in the process of stealing our country away from its rightful owners–the people–and trans-fering Canada from a liberal democracy to a socialist dictatorship.

A minority Canadian government in entitled to minority power in office. Frankly, none of this applies in any capacity regarding King Justin and his Liberal-Socialist government.