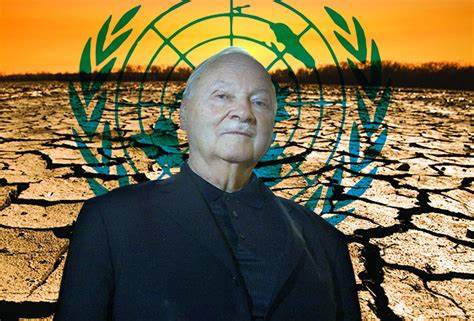 In a report released in the year 1974, Mankind at the Turning Point, the Club of Rome put forth the following proposition:

“Now is the time to draw up a master plan for organic sustainable growth and world development based on global allocation of all finite resources and a new global economic system.”

From which we gain insight into the roots of what Cultural Action Party refer to as the Woke Revolution of Justin Trudeau. It’s not nearly as “progressive” as one might believe. It was no later than 50-years ago that what has become known as the “Great Reset” was established.

How many Canadians are aware of the role that the elites of our country played in the worldwide founding of the woke environmental movement?

“By far the most influential organizer of Rockefeller’s ‘zero growth’ agenda in the early 1970s was David Rockefeller’s longtime friend, a billionaire oilman named Maurice Strong.”

Strong stated the purpose of his radical environmental agenda back in the mid-1970’s:

“Isn’t the only hope for the planet that the industrialized civilizations collapse? Isn’t it our responsibility to bring that about?”

At this time, Strong was co-chairman of the World Economic Forum. In 2015, at the time of Strong’s death, Davos founder Klaus Schwab wrote:

“He was my mentor since the creation of the [World Economic] Forum: a great friend; an indispensable advisor; and, for many years, a member of our Foundation Board.”

And he was a Canadian.

World Economic Forum, Rockefeller, United Nations, Rothschild Foundation. Could CAP be on to something here?

By 1968, Strong helped found the Canadian International Development Agency under Liberal Prime Minister Pierre Trudeau.  Strong was able “to conceptualize and explain sustainable development when no one knew what it was.”

We come to our Canadian content, also known as Cancon:

“Strong had his start as an entrepreneur in the Alberta oil patch and was President of Power Corporation of Canada until 1966.”

As referenced in previous articles, Power Corp was founded by “close family friends” of the Trudeaus, the billionaire Demarais family of Quebec. It was they who formed something called the Canada-China Business Council in the early 1980’s.

Unbeknownst to most citizens, the CCBC has for decades been the primary driver for the government of China’s infiltration of Canadian society. Maurice Strong served as Power Corp President from 1961 until 1966.

Mr. Strong said he considered himself to be “a socialist in ideology, a capitalist in methodology.”

Strong lobbied to change NGO perspectives on the World Bank. He is believed to have inspired the works of former U.S. Vice President Al Gore on climate change.

“During investigations into the U.N.’s Oil-for-Food Programme, evidence procured by federal investigators showed that in 1997, Strong had endorsed a check for $988,888, made out to “Mr. M. Strong,” issued by a Jordanian bank.”

“It was reported that the check was hand-delivered to Mr. Strong by a South Korean businessman, Tongsun Park, who in 2006 was convicted in New York federal court of conspiring to bribe U.N. officials to rig Oil-for-Food in favor of Saddam Hussein.“

My, my– the things a curious Canadian can learn from a simple wikipedia search. Here, we uncover one of the most influential and powerful Canadians who ever lived. How many citizens are aware of who this man is, and his impact on what eventually transitioned to a post-modern woke environmental revolution?

Very few, to say the least. Looks as if media has taken care of this one. A man who should be understood as predecessor to Justin Trudeau’s woke assault on society is hardly a household name.

Pourquoi? because the Liberal government do not want 38 million citizens to comprehend the roots of Canada’s set-up for social and economic downfall.

“Shortly after this, Strong moved to an apartment he owned in Beijing, where he appeared to have settled.”

If CAP Can Do It, So Can Mainstream Media

It took us but one hour to call up the details on Canadian Maurice Strong’s development of the prototype for Canada’s Woke Revolution. A half-century from inception, and CBC has never delved into this– at least as far as we can tell. Nor has any other legacy media outlet.

Media protection of the Liberal Party? Of course it is. When this is buried, so too is Justin Trudeau’s ideological foundation for the ruination of Canadian society.

Let us repeat it: “Isn’t the only hope for the planet that the industrialized civilizations collapse?

Industrialized, meaning western nations, and western democracies in particular. Has anyone happened to have noticed? Communist and theocratic nations are exempt from the program. Saudi Arabia, Iran, China— none of PM Trudeau’s preferred nations make the cut. It’s also true for the rest of the woke malarky.

LGBT, Abortion, Euthanasia, Transgender, and the rest of the gender nonsense. Say no-go in Afghanistan, give our regards to oil billionaires in Yemen. None are victims of the woke assault.

Western democracies only– thanks very much. Extent to which such concepts exist with the pantheon of political correctness in Canada? Start with zero, end up at nothing.

All this could have been understood by Canadians. It might have been, if not for a covert government-media relationship which has also existed for over a half-century.

Maurice Strong died at the age of 86 on November 27, 2015. In no manner did his vision die. Justin Trudeau is a living and breathing representative of the “Globalist Cult of Maurice Strong.”

“This is the dark origin of Klaus Schwab’s Great Reset agenda, where we should eat worms and have no private property in order to save the planet. The agenda is dark, dystopian and meant to eliminate ordinary humans.”

In Canada, Justin Trudeau is the belle of the woke liberal ball.

5 thoughts on “Roots Of Woke: The Hidden World Of Canadian Billionaire Maurice Strong”