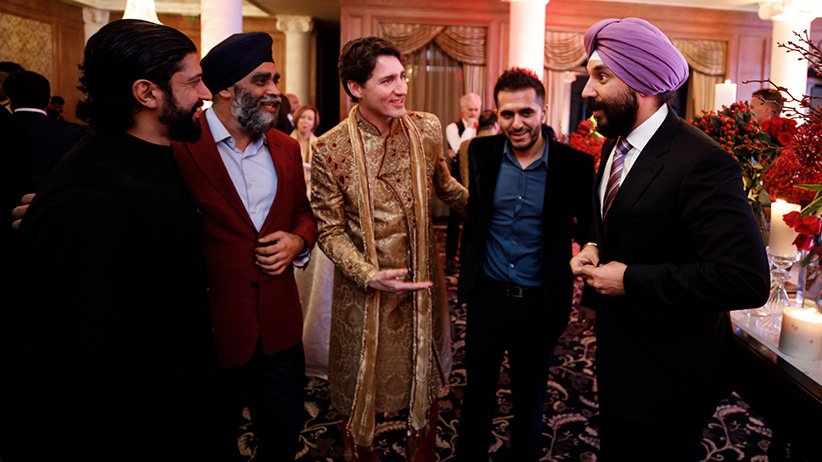 Within contemporary Canada, cultural advancement and retention is a most curious thing. Of course, this is one reason why media never touch the topics CAP  write about.

His most contentious move thus far has been Bill C-21, Quebec’s “religious neutrality” legislation. This calls for religious symbols worn by government workers to be banned. It applies to all overt religious symbols–crosses, the Jewish Star of David, Sikh Turbans and Muslim head-coverings.

Basically, equal treatment for all religions. Unfortunately, there are non-profit multicultural organizations who do not believe in “equality” for all religions. For some reason, National Council of Canadian Muslims believe the situation in Quebec is “worse for them.” What else is new in Justin Trudeau’s “post-Canadian” Canada.

Starting Jan. 1, 2020,new arrivals will have to prove they have learned “democratic values and Quebec values” in order to obtain a selection certificate, the first step toward permanent residency for immigrants wanting to live in the province.

Based upon NCCM’s attitudes toward our nation, this will no doubt be classified as an act of “racism.” This tax-payer funded not-for-profit group is presently in court challenging Bill C-21 with liberal hired gun “Civil Liberties” organizations backing them up in court.

Outside of Quebec, the recent re-election of PM Trudeau has empowered Third World Canada more than at any time in Canadian history. Curiously, establishment media say nothing about this development.

Sikh-Canadian identity? Go for it. Maintain all the pride, culture, and ethnic community identity that you wish. It won’t be that difficult, seeing that within the Trudeau Government Sikhs are over-represented in a major way.

Islamic Canada–you are good-to-go. Our government bodies established multiple “Islamic Heritage Months” on your behalf–even though, technically speaking, Canada has no Islamic heritage. What a privilege this is. This community was a non-player for 90% of our nation’s existence. It wasn’t until King Justin gained his crown that Islam suddenly became an integral part of our history and heritage. Blink, and you would have missed it.

Why, there is even a Somalian Heritage Museum in Edmonton, Alberta. Somalians comprise around .0005% of the Canadian population.

Now, let’s talk about Anglophone Canada. Fact is, every fundamental of Canadian governance is rooted in British and European governance. Parliamentary structure. Law. Judicial system. Election formats. Hidden Ballots, Habeas Corpus(right to fair trial), Jurisprudence, Human Rights, and so much more. None of this comes from Somalia.

Anglophone Canadians comprise tens of millions of our national demographic. Present-day Anglo-Christians are the descendants of those who founded our nation, and established the social infrastructure mentioned herein.

Pourquoi? Is this not one of the most curious situations within modern Canadian society? Why is it that English Canada and its peoples are the singular shunned community within Justin Trudeau’s “pluralist” Canada? Why do media ignore this entire situation?

In fact, Trudeau has indeed referenced English Canada–but only when he is slamming our people for being racist, bigoted, and xenophobic.

Trudeau’s comment on the recent “values” development in Quebec:

“During the federal election campaign, Prime Minister Justin Trudeau recognized Quebec’s right to impose a test as part of the selection certificate process.”

Huh? What the heck is this all about? Did Justin Trudeau not just spend four years tearing down every aspect of nationalism, patriotism, and social conservative movements within non-Quebecois Canada?

Of course he did. CAP Conclusion: Justin Trudeau is in favour of the promotion of every identifiable community in Canada–with the singular exception of anything related to Anglophone identity within our nation.

But folks– isn’t the PM’s job to work toward equality for all identifiable communities? Please do tell–why is the largest community( Libs are in process of destroying this) also a silent, powerless, culture-less element of Canadian society?

Globalist ideology places white Canada in the dog house. It is, in reality, a case of solitary confinement— a social “prison” of sorts. What keeps white Canada in a perpetual prison of this variety?

An accusation of racism and bigotry. Who are a few of the politicians who for four years placed a yoke upon  Anglo-Canada in this regard? Why, it is Justin Trudeau himself. Additionally, his ethnocentric cabal of globalists: MP Ahmed Hussen, MP Iqra Khalid, MP Omar Alghabra, as well as their “best buddies” down at the Council of Canadian Muslims.

Media say nothing–when in fact, these publishers, editors and journalists are Anglo and Franco-Canadians in the main.

What a bizarre state of affairs all this is. CAP call “conspiracy” on this one. How else could this social inversion and marginalization occur?

Does any reader believe this to be an organic development? How could this be so–when no other nation on planet earth is beating the crap out of their own people in the manner we are witnessing in Canada?

Obviously, there is only one thing to do. Actually, there are two. First, Anglophones must organize on political lines–just as Justin’s Sikhs and Muslims have done so effectively.

Second, throw off the “racist” yoke Trudeau, Hussen and Khalid have placed upon our shoulders. Throw all accusations of racism in the trash bin, and push forward. If not, in the long term your community is finished.

Sikhism. Chinese. Islam. Quebec. Third World–all with a green light for cultural retention and advancement. In Canada, this is referred to as “multiculturalism.”

Then NCCM begin moaning and whining about “white supremacy” in Canada. What a farce this is!

Yet, it is no joke. One additional generation of this dynamic and English Canada will be finished.