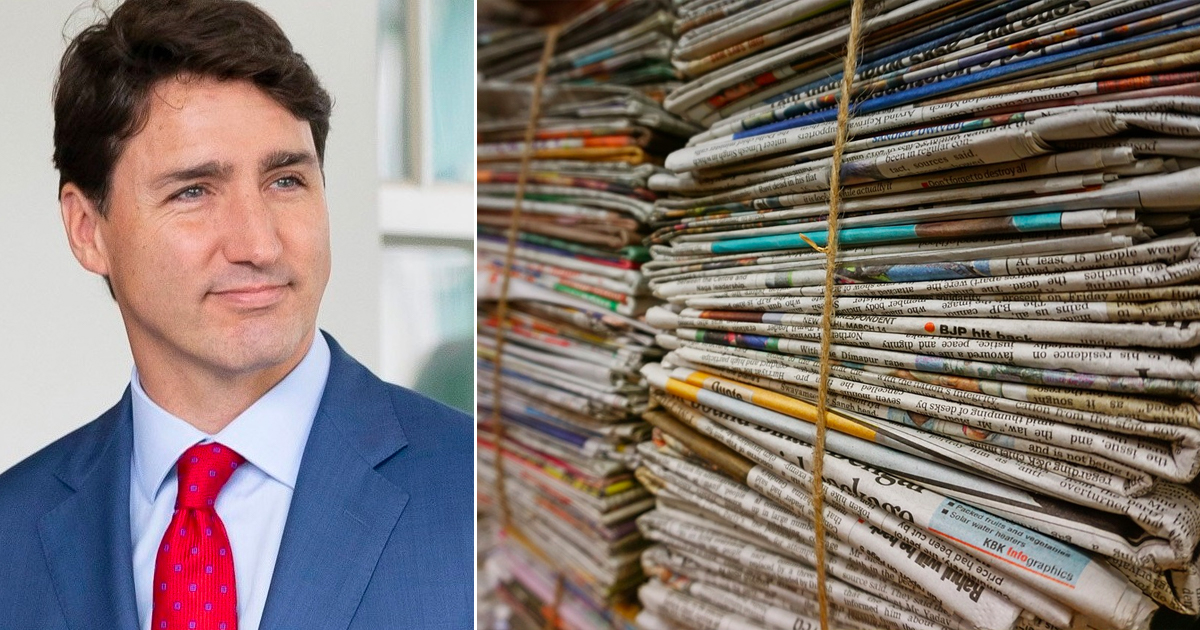 According to a recent poll, the majority of Canadians distrust mainstream media. A report from the Reuters Institute for the Study of Journalism at University of Oxford finds that only 42 per cent of Canadian respondents trust “most news, most of the time.”

Why is it that public trust in media has eroded steadily since 2016? One theory(ours) is that trust in the press has diminished in tandem with Justin Trudeau’s tenure as Canadian prime minister. An inverse relationship exists within the annals of media presentation. The greater the degree to which media function as a propaganda unit for government, the greater the lack of public trust.

In this regard, Canadian media play a wicked game. To ubiquitously back PM Trudeau and his brood of Liberal-Communists will not do. On this basis, Canadians are sure to see through the deception. To circumvent the perception, CBC, CTV, Globe & Mail and the rest limit criticism of government to pragmatic political issues.

Yes, they will criticize fiscal policy and matters of financial orientation. What they will not do is condemn the Liberals on an ideological basis. Never do they mess with Justin Trudeau’s woke messaging. The press are perfectly fine with trashing the working class. Condemnation of Anglophone-bashing Critical Race Theory and Transgender-For-Youth promotion is non-existent. Backlash against branding Canada intrinsically racist is off-the-radar. Sikhism and Islam are the belle of our religious ball, while Christianity is remains anathema.

On an ideological basis, our Liberal government and mainstream media function as a team–  as it exists within China, Cuba and communist societies.

“English-speaking Canadians expressed lower confidence this year in the news media’s independence from both political and commercial influences.”

Why the heck wouldn’t we? What is found upon peeling back the layers of propaganda? In Trudeau’s Canada, community suffrage constitute paths to power. Those who complain most gain most. Our Liberal government has transformed our country into a competition of which identifiable community most effectively complains about society. The competition is fierce:

“The Nation of Islam breaks away on the inside. In the centre lane, LGBT makes its move. The Sikh horse, Komogata Maru, pulls away on the outside, but “Inclusive Except For Those We Despise” the Transgender gelding, crosses the finish line first.”

Then there are Anglophone-Canadians. This community  failed in qualifying rounds, as did Canada’s Christians. Irony springs forth in the idea that, in many ways, these communities are Canada’s most targeted of all.

Government and media have fallen into a strange relationship with the public. Today, the two exist in independent spheres. The Liberals work for the World Economic Forum and World Health Organization. Decimating key working class industries such as Oil, Trucking and Farming, the goal of government exists separate and apart from the needs and wants of our citizenship.

“Anglophones who identify with the political right are more likely to be skeptical of the media’s independence.”

Woke Translation: those skeptical of media are right-wing racists. In fact, make that everyone who dares question Liberal government policy. If any element of society should be skeptical of legacy media, it is white Canadians.

The reason is basic: as financed by the Feds, our press insult, degrade and vilify Anglophones on a daily basis. It includes religious affiliations. Don’t you know? The Christian church is menace to society. According to media, they are wholly responsible for the persecution of our Aboriginal peoples. Never mind that the federal government held jurisdiction over Residential Schools for a period of one hundred-years.

It’s all so insidious. It’s as if government are only interested in playing games with Canadians. They toy with us, taunt us, and twist truth into lies.

It’s all so very…communist. In post-modern Canada, citizens are commodities utilized like factory widgets. Ethnic communities are leveraged for political power accumulation.  Witness as Justin Trudeau transitions our country into the very thing he and his family most admire: a communist dictatorship.

In 2022, mainstream media work the will of government, and government doesn’t much like “Old Stock” Canadians. Is it because we exist as a singular wrench thrown into the government-media communist engine?

The roots of which are found in Marxist ideology and Communist governance. Will  Canadians one day recognize our transition away from freedom and democracy as advanced by this government-media partnership?

If so, it’s bound to occur at a point when nothing can be done to reverse the process. Nothing could be more quintessentially Canadian than this.