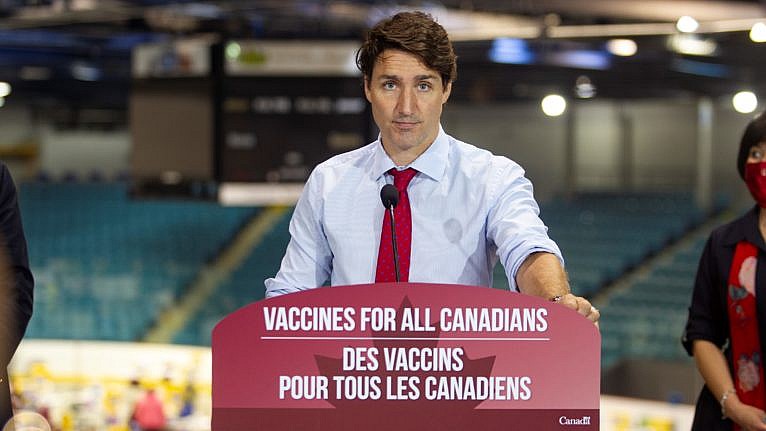 As Prime Minister of Canada Justin Trudeau marched his masked self down the sidewalks of Cobourg, Ontario, crowd reaction typified public response to his campaign stops. After waiting for two hours for Trudeau to appear, a man shouted “go to jail, you’re a traitor.”

Another attendee stated that “an overwhelming number were against him, not for him– there was a lot of heckling and booing.” A third person commented that Trudeau’s words were “typical rhetoric, and said nothing.”

Which is more than can be said for his campaign stop in Aurora, Ontario. A lady began badgering Trudeau regarding vaccinations for Canadian children. After being hurled to the ground, the masked man delivered one sentence to the crowd– “please get vaccinated.” After which he scrambled toward the security of his campaign bus.

Another stop, another example of chaos permeating the picture. CTV News described the scene as “interesting.”

After nearly six-years with Trudeau as prime minister, our nation is more divided than ever. And without question– more angry than ever. Those in Trudeau’s path are hot-under-the-collar, to say the least.

Can Justin Trudeau be as popular as media and pollsters claim he is? Call CAP skeptical– we don’t believe it for a micro-second. Let us witness how in-person campaigning has undergone a dramatic transformation.

Justin Trudeau is not waltzing gracefully down the streets of small town Canada. It is much more like mad “100-yard dash” to the campaign bus. Wearing his mighty Covid mask, Mr. Trudeau is being reduced to his standard behaviour–  going through the motions.

The situation feels more like a fulfillment of  “contractual obligations.” The man is prime minister. He must tour the country in order to appear legitimate.

Such as it for the person CAP label as the most hated politician in Canadian history. So how can he possibly win? Trudeau has been campaigning in Ontario— a so-called stronghold of popularity for the Liberals. This is not Alberta or Saskatchewan, two provinces which did not elect a single Liberal MP to office in 2019.

So what if he wins–which incredibly, he has a solid chance of accomplishing. What can be said other than a most nebulous conclusion: there is something very, very wrong with our country.

It has been so since the day Justin Trudeau placed the Canadian crown upon his head. Will a victory elevate the chaos found in small-town Canada toward nation-wide public protest?

If so, perhaps the Liberal-Globalist strategists will “get lucky,” and Captain Covid will come along to make public protest illegal. Just as it is in countries most admired by our prime minister– those of communist orientation.