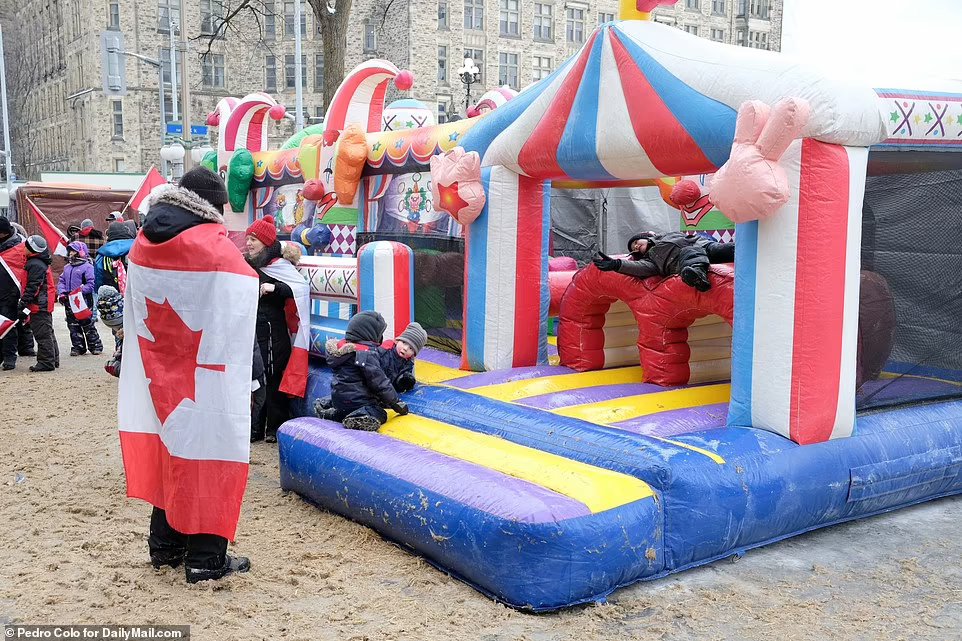 Questioned on the final day of the inquiry, PM Justin Trudeau paints a portrait of Canada teetering on the edge of violence as he defended his decision to invoke the Emergencies Act to end “Freedom Convoy” protests in Ottawa.

“Trudeau in his testimony said officials had seen the weaponization of vehicles, with a report of protesters trying to ram police officers at protest sites in Alberta and British Columbia, and “the use of children as human shields” in Ottawa.”

As critics acerbically pointed out, activity involving children during the Convoy centered around “bouncy castle” time as their parents participated in the protest.

A report from Global News at the time of the protests delivers insight:

“Almost 25 per cent of the 418 trucks have children living in them — children who could be at risk during a police operation.”

“We’re not seeking to take the kids out of the trucks or away from their parents at this stage.”

Thank the good lord for that. Otherwise, Canadian parents might have gained greater awareness of their country’s slide into authoritarian state-control. And if patriots think children are troublesome, try this on for size:

Children and grandmothers? Call out the National Guard, dude. As with any political decision, it is done for a reason. That none of the criteria qualifies for an invocation of the Emergencies Act transitions to secondary data.

The real reason is one of control. Justin Trudeau wanted to ensure that a protest of this stature never occurs again.

According to Mr. Trudeau “using protests to demand changes in public policy is worrisome.” Permit CAP to drill down on this statement. Yes, it is worrisome– for Justin Trudeau and the Liberals.

You see, this would be an exercise in democracy. King Justin hates this kind of thing. For our silver-spoon fed communist enthusiast, democratic process is, simply put, “a pain in the Butts.”

From day one, our PM has behaved as if the will of the public is little more than a nuisance. Public protest is an annoyance, which by “coincidence” became all-but illegal upon the arrival of China’s Covid dissemination in Canada.

Or can it be a situation in which– we stand aghast– Justin Trudeau does not understand the principles of democratic governance? Check this out:

See this? It’s a little thing called an excerpt from Canada’s Charter of Rights and Freedoms. Existing as a bedrock of individual rights and freedoms in Canada since 1982, Justin Trudeau hereby steps all over it with his inherent ignorance.

‘The Canadian Charter of Rights and Freedoms protects a number of rights and freedoms, including freedom of expression.’

Where’s the crime, Justin? Even the RCMP declared the protest to be violence-free. Insightful Canadians begin to tune in to the true picture:

The words of Justin Trudeau, Chrystia Freeland, Bill Blair and Marco Mendicino all fall into a singular category. It’s what is called “rationalization.”

Commit the act, and then back-fill the story with a pile of hokum. Children were not used as human shields. Show us the money, Mr. Trudeau. Prove it to be true—it is not a casual claim.

But the police absolutely know that the legal standard for violence was never breached. Yes, anything could have happened, but does Canadian law not judge these situations on what has occured? Where is the tangible evidence, Mr. Trudeau?

Witness as the PM leaps to the absolute worst case scenario– as he did with his “Nazi flag” claim. Regardless, government best hurry up and close the inquiry. We must make room for that which is warming up in the political bull-pen.

Have you heard the news? The RCMP have launched a probe into the existence of Chinese police stations on Canadian soil.

Beyond this, talk is brewing that an official inquiry will be launched to investigate Chinese government funding of eleven MP candidates in the 2019 federal election.

It never ends. Corruption oozes from the pores of the Trudeau government. All the while, media take the edge off the sharpened knife of Liberal government scandal.

As for Trudeau himself, seems he can say anything he likes– no matter how nonsensical — and still remain atop the throne of Canada.

Just as it is in the communist nations he and his family so admire.