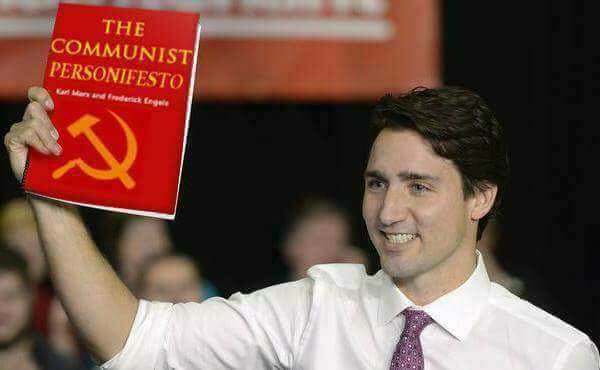 “Of course, deploying the sounds of silence against a disturbed president was a one-off, if it was indeed a deliberate communications strategy. But perfect it was.”

For millions of Canadians, an example of surrealism was found in our high school text books, to be filed under “Art.”

For the state-of-our-nation by way of Prime Minister Justin Trudeau, surrealism is not something found under “D” for Dali, but rather in the socialist-style relationship between Canadian government and establishment media.

Since when did a prime minister stymied by a reporter’s question become pure gold?  When was the last time a national leader’s total silence while flabbergasted by a journalist’s question was declared an act of “perfection.”

Correct Response: When our nation is being covertly “revolutionized” by globalist forces which in the year 2020 control the destiny of our nation.

It wasn’t always this way. Previous to the advent of globalism— understood as so-called “multiculturalism” in Canada, media made a fair attempt at delivering objective news information to the citizens of our country.

For CAP, it was former Liberal PM Pierre Trudeau who decided the condition of Canada simply wasn’t good enough. Trudeau Sr. envisioned a completely different nation for the destiny of Canada, and thereby set out accomplish his goal.

The first move made was to cancel the first 100 years of Canadian identity. Just in case Liberal GTA MP’s like Iqra Khalid and Omar Alghabra do not realize it, for our first century of existence our nation we maintained a bi-cultural, English & French Canadian identity.

Pierre Trudeau cancelled this—all by himself. After visiting China in the early 1970’s, Mr. Trudeau forced multiculturalism upon society. Most Canadian did not think this to be an ominous development.

CAP disagree. This unprecedented, non-democratic piece of ideology was to trans-form Canada at its “core.” Suddenly, the First World became “bad,” and the Third World became “good.”

This, fellow patriots, is the Trudeau family—Justin, brother Alexandre Trudeau, as well as Pierre Trudeau before them. As decades passed, this new societal structure began to have negative repercussions for Old Stock Canada.

In 2020, under the iron-clad grip of Justin Trudeau’s pseudo-dictatorship, Anglophone and European-Canadians are experiencing a far greater concern.

Canada is today an anti-European Canadian nation. The days of democracy within King Justin’s Liberal-Globalist nation are numbered.

As CAP spoke of “from day one,” Justin Trudeau is unlike any PM in history. The 23rd prime minister of Canada has trans-itioned European-Canadians into a pariah people of society.

Within present-day Canada, the George Floyd murder in the USA has created a giant ground-swell of animosity toward Anglophone-Canadians. Is the leader of the movement some radical anarchist with a pink mohawk haircut?

No—the leader is the prime minister of Canada. And quite a formidable army Trudeau has to back him.

Who are these men of “lust, greed and glory?” Rip off the masks, and let’s see:

The Liberal Party of Canada. United Nations. Middle Eastern governments. Communist China. Iran, Iraq, Saudi Arabia and the rest of the oil-producing nations outside of Canada.

Degree to which media expose this nasty historical tale? You got it, fellow patriots—ZERO degrees.

Let us be perfectly clear— if CTV News can label Trudeau’s 21 second salute of silence as “perfect”—as in a brilliant piece of political strategy—how can a sensible Canadian believe a SINGLE WORD these media people have to say?

Not that this will prevent CBC, Globe & Mail, Toronto Star and National Post from publishing a streaming heap of drivel within their publications.

So the general populace of Canada are supposed to “buy” this piece of political “perfection.” What fools media take our countrymen for.

This “perfection” should serve as a quintessential microcosm for what has already transpired within our country— democracy is gone. In its place, Liberal-Globalist “pseudo-communism.”

Media push the government line no matter what goes down—just as media does in China. PM Trudeau is utilizing Covid-19 to subtly inject socialism into the body politic of Canada.

This occurs when government become responsible for the “daily bread” of the citizenship. To be successful at such a mission, the changes must be rolled out incrementally, so that the public are fooled into believing a lie.

That Canada is today what it once was—a free and democratic nation. For CAP, this is, in fact, dead as a door nail. Turns out our citizenship has in the year 2020 a new set of masters.

CAP’s Skill Testing Question: Name two Canadians who are most responsible for a loss in freedom and democracy in Canada?

We go with Pierre Trudeau, and Justin Trudeau. Name the political figures who are most responsible for Canada’s present-day anti-Anglophone, anti-European Canadian society.

Name those who have most greatly promoted anti-Anglophone “multiculturalism” in Canada. Mass 3rd World immigration? The rise of Islam and fall of Christianity?

Pierre Trudeau, and spawn Justin Trudeau. Who is a PERFECT prime minister according to Canadian media?

Perhaps—or maybe just a portion of it—the part that the prime minister of our country despises— Anglophone Canada, English Canada, and Christian Canada.

While media work their socialist agenda of political protection for Mr. Trudeau, our society undergoes a transformation away from true democracy, and toward a Trudeau-brand socialist dictatorship.