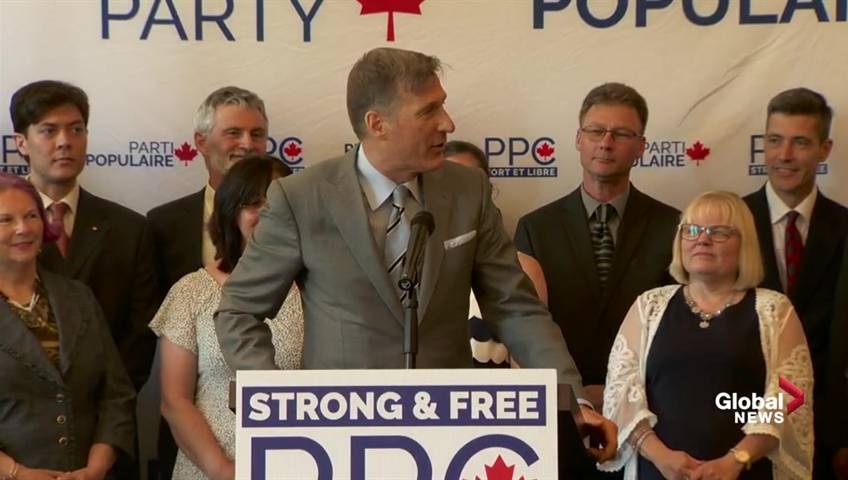 As federal election voting day draws near, the People’s Party of Canada, led by Maxime Bernier, is moving up in the polls. According to the most recent Nanos poll, PPC support has more than doubled over the course of the campaign.

Let us contrast this with the manner in which state media outlet CBC News describe the emerging political party:

“People’s Party of Canada Leader Maxime Bernier has been using a phrase in speeches and in tweets similar to one used by members of a far-right militia group.”

“Bernier’s statements could be interpreted by members of some far-right extremist groups like the Three Percenters as an endorsement.”

They could be– and they have been– by a media organization Prime Minister Justin Trudeau delivers $1.2 Billion dollars to each year.

Translation: The CBC want the People’s Party of Canada to fail. To facilitate, they throw every piece of dirt at them they can dig up. The problem is– it isn’t working. Liberals and legacy media indulge in the same methodologies to crush any political movement antithetical to the globalist ethos.

The fault is found in the public. Canadians who think outside the globalist ethos are racists, bigots and xenophobes. There is no grey area. Absolute polarization is the way government and media roll.

On this basis, an entire premise is pushed aside: perhaps the responsibility is found in government, not in the public. Can it be that citizens are sick and tired of six-years of Justin Trudeau’s “she-sessions” and trashing of Canadian history?

Is it possible that the public have had enough of a Liberal-led “pity party” for all dwelling outside the category of “Old Stock” Canadians? Let us reverse the tables, and pose a question to Canada’s new arrival communities:

How would you feel after six years of being held responsible for every hardship experienced by Canada’s “racialized” communities? A bit different when the shoe is on the other foot, eh?

While CBC brand the People’s Party Of Canada one-step from 20th century stormtroopers, they neglect to articulate the following fact: one of the founders of the PPC is Arvind Sood, who migrated to Canada from India in 2003.

“Sood is bemused by the notion that the PPC is a party of disgruntled white males who oppose immigration, noting that many people of colour, including Indo-Canadians and new immigrants, support the party.”

As reported by CBC in a recent article on the PPC, deputy director of the Canadian Anti-Hate Network Elizabeth Simons commented that using the word “rebellion” rather than “revolution” is strongly associated with the American Three Percenter movement.

Working with Ms. Simon’s form of “logic,” Canadians are to conclude that the word “rebellion” constitutes some kind of right-wing manifesto.

Let CAP lay it on the line: CBC News, mainstream media and witch-hunting non-profit organizations want all opponents of liberal-globalism to fail.

In other words, true democracy has no place within our political spectrum. The result being a form of globalist authoritarianism that has progressively taken hold since Justin Trudeau became prime minister.

If the People’s Party of Canada adhere to Canadian law, they must be free to function unencumbered by the deceptions of mainstream media.

The rule of law says so– while the message of media says otherwise.